Companies and institutions like to hold onto IP for all it's worth. But could they be squeezing the life out of innovation? 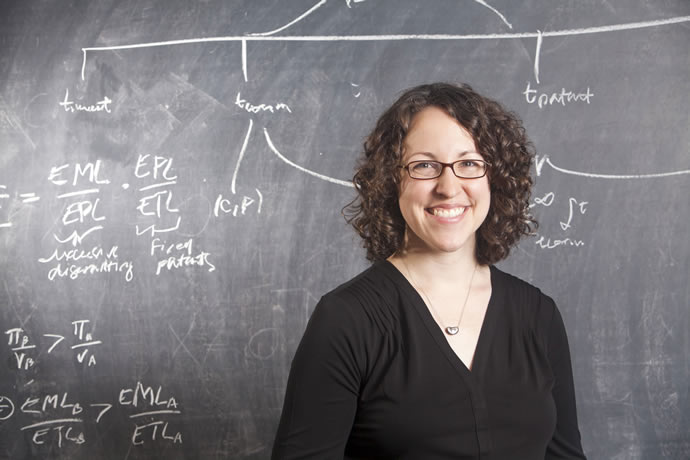 "I'm going to invest in high-tech research jobs in countries and states which support intellectual property," GlaxoSmithKline CEO Andrew Witty told an audience at the International Association of Science Parks' annual conference in Research Triangle Park, N.C., six years ago. "I'm not going to invest in places that don't support IP. That's critical, and there's no point in pretending otherwise."

But what if IP were an obstacle to innovation instead of its catalyst?

That question is at the center of work by newly named MacArthur Fellow Heidi Williams, an economist and professor at MIT who won one of the five-year, $625,000 "genius grants" earlier this month. As noted in the MacArthur citation, the 34-year-old Williams is "unraveling the causes and consequences of innovation in healthcare markets, and how IP restrictions and may inhibit discovery."

The topics she and research colleagues have been tackling are particularly relevant to 21st century global biopharma companies. Their R&D and discovery models have been migrating over the past decade from completely in-house affairs to ecosystems, whereby big firms seek to cultivate SMEs and then harness their entrepreneurial energy as well as their IP through partnerships that are big on collaboration and short on overhead costs. GSK's Witty alluded in his 2009 speech to such a model, which the company has pursued since that time in places such as Montréal, Singapore and right there in North Carolina.

"How can we accelerate the potential integration of all of these technologies, and break down the walls to our own research facilities?" he asked his audience. "Inside those, we've already broken them down into small biotech businesses. The next step is to break down the walls completely, with co-located start-up companies right next to GSK facilities."

Celera was founded by the ultimate genetic researcher, Craig Venter, in 1998, and was acquired by Quest Diagnostics in 2011 for about $671 million. The company's gene sequencing research took place between 1998 and 2001, in parallel with the Human Genome Project's open-source approach, launched in 1990 and aiming to complete its goal in 2003.

The company's IP gained by that work is at the center of Williams' research. As she documents in her paper in the Journal of Political Economy, "Between 2001 and 2003, Celera used a contract law–based form of IP to protect genes that had been sequenced by Celera but not yet sequenced by the public effort. Celera’s IP had several key features. First, Celera’s data were 'disclosed' in 2001 in the sense that any individual could view data on the assembled genome through Celera’s website or by obtaining a free data DVD from the company. Academic researchers were free to use Celera’s data for non-commer- cial research and academic publications. Second, by placing restrictions on redistribution, Celera was able to sell its data to larger institutions — including pharmaceutical companies, universities and research institutes."

Deal terms were private, she explains, but reliable reports said "pharmaceutical companies were paying between $5 million and $15 million a year, whereas universities and nonprofit research organizations were paying between $7,500 and $15,000 for each lab given access to the data. Third, any researcher wanting to use the data for commercial purposes was required to negotiate a licensing agreement with Celera. Celera was able to charge these data access and licensing fees even though all available accounts suggest it was publicly known in 2001 that all of Celera’s genes would be resequenced by the public effort, and thus move into the public domain, by 2003.

She then cites a 2005 report quoting Venter himself on a dynamic familiar to any corporate seeker of advantage: speed to market: “Amgen, Novartis, and now Pharmacia Upjohn have signed up knowing damn well the data was going to be in the public domain in two years anyways," Venter said at the time. "They didn’t want to wait for it.”

"Leveraging the race to decode the human genome by private and public institutions as a model, Williams reveals how the timing and nature of intellectual property restrictions affect subsequent innovation," said the MacArthur citation. "She presents convincing evidence that a non-patent form of intellectual property protection at the early stages of scientific research limited follow-on innovation on human genes, a finding that was cited in arguments submitted to a 2013 U.S. Supreme Court case on gene patents."

As Williams wrote in her article, "Across a range of empirical specifications, I document evidence that Celera’s IP led to reductions in subsequent scientific research and product development on the order of 20–30 percent." In subsequent work, however, notes the MacArthur citation, "she and a co-author find evidence that patent protection on human genes has in fact not substantively hindered later research or product development, suggesting that the precise design of intellectual property policies is important in shaping innovation outcomes."

There's certainly been no reduction in Quest Diagnostics' global growth. The Conway Projects Database has tracked a dozen corporate facility investments over the past decade from Quest, a company with 2014 revenues of $7.4 billion, 45,000 employees, 2,200 patient service centers and a logistics fleet that includes 3,000 vehicles and 20 aircraft.

In addition to the U.S., Quest Diagnostics operates clinical laboratories in laboratory facilities in Gurgaon, India; Heston, England; Mexico City, Mexico; and San Juan, Puerto Rico. Its most recent landmark investment is a 200,000-sq.-ft. (18,580-sq.-m.) "Lab of the Future" that held its ribbon-cutting last October. When fully operational, the facility is expected to employ 1,350 health care professionals — 00 more than originally projected by the company in 2013 when it announced plans to establish a major laboratory in Marlborough to serve New England.

"Quest's new laboratory in Marlborough is an example of the burgeoning technology sector here in Massachusetts and further proof that the Commonwealth is an innovation leader," said Congresswoman Niki Tsongas at that ceremony. "Our unique ecosystem brings together high quality academic, business and government resources with a highly skilled workforce."

The facility unites operations and employees from approximately half a dozen of the company's clinical laboratories spread across Massachusetts and Connecticut. It also provides the base for Quest's first diagnostic R&D center in New England and only its third in the United States. The R&D center is focused on advanced technologies, including, as luck would have it, "next-generation sequencing, as well as neurology, reproductive genetics and other specialized medical fields."

Additional capabilities will include bioinformatics and population-health analytics to mine the company's national testing data to uncover insights that will help clinicians and health systems identify gaps in care.

The facility also extends a relationship Quest Diagnostics and UMass Memorial Health Care formed when Quest acquired UMass Memorial's clinical and anatomic pathology outreach business in Worcester in 2013. "About a dozen physicians and medical faculty employed by UMass Memorial Medical Group and the University of Massachusetts Medical School will provide scientific leadership for several facets of laboratory testing for the Marlborough lab," said the company last fall. "They will also counsel the region's physicians in the selection and interpretation of clinical laboratory tests, collaborate on R&D, and assist with residency programs onsite for the University's medical students."

"We are excited to bring together these bright minds from Quest Diagnostics, UMass Memorial Medical Group and the University of Massachusetts Medical School under our one roof," said Denis Gallagher, vice president, operations, Quest Diagnostics. "Creativity and innovation emerge when talented individuals collaborate, and we believe this facility will inspire people to create and share ideas to improve healthcare."

Innovation. Ecosystem. Collaboration. It all sounds fine and dandy in press releases. But as any university's tech transfer personnel know (and Williams' work dissects), the devil's in the details — specifically, the precise language, timelines, protocols and policies found in the documents forming the foundation of partnerships.

How such arrangements play out when it comes to IP sharing or protection, profits, speed to market and, ultimately, speed to patients with life-changing treatments, may be subject matter for future geniuses to explore.