If you're ready to consider the possibility of a whole new world of life sciences in places where it seems little life can be sustained, start exploring the research and work being done by the Max Planck Foundation, among others, in assessing the potential of cultivating crops irrigated with salt water.

BioPharma India 2015 will take place November 3-4 in Mumbai, featuring a number of prominent leaders from organizations such as Pfizer, Bristol-Myers Squibb, Doctors Without Borders, Stempeutics and Biocon.

CooperVision has announced a 400-job, $40-million expansion of its contact lens manufacturing plant in Gyal, Hungary, which it acquired in 2014 from UK-based Sauflon. The company also just held the grand opening for its new corporate offices in the High Point development in Victor, N.Y., part of the Rochester metro area. The company maintains two other Rochester-area facilities: its made-to-order contact lens manufacturing site in Scottsville, and its global logistics and distribution center in West Henrietta. In total, CooperVision employs more than 1,250 people in the region. “CooperVision’s headquarters are in Northern California, yet 80 percent of our US operations are in Rochester,” said Jerry Warner, CooperVision’s president of North America.

AstraZeneca has acquired a high-tech biologics bulk manufacturing plant in Boulder, Colo., from Amgen Inc. The company expects commercial production licensing to come by late 2017, and may create as many as 400 jobs at the site. The purchase is part of an overall growth strategy that also has included recent investments in Maryland and Sweden.

As part of a goodwill mission in the nation's capital, leaders of a Taiwanese delegation last week signed a letter of intent with the US Soybean Export Council (USSEC) committing to purchase between 2.6 million and 2.9 million metric tons of soybeans valued between $1.13 and $1.26 billion U.S. dollars by 2017. In 2014, Taiwan was the fifth-largest market for US soybeans. Members of the Taiwanese delegation also toured the US Grain Belt to see farms and grain elevators firsthand, meeting with government officials, farmers, agriculture groups and other important international organizations in Iowa, Illinois, Kentucky and Minnesota. Not surprisingly, from a diplomatic perspective, a signing ceremony with Chinese customers was scheduled for Thursday, Sept. 24, in Iowa. to coincide with Chinese President Xi Jinping's visit this week. China purchases 25 percent of all US soy.

AmerisourceBergen, the global pharmaceutical sourcing and distribution services firm based in Pennsylvania, announced in June it plans to build three new distribution centers in Olive Branch, Miss.; Shakopee, Minn.; and Newburgh, N.Y., part of the company's ongoing investments worth more than $1 billion over the last 10 years to the distribution network and IT systems that handle nearly 35 percent of all of the pharmaceuticals sold and distributed throughout the country. Construction on the new facilities is expected to start in the summer of 2015 and will take from 18-24 months to complete

A new analysis by the Synthetic Biology Project at the Wilson Center finds the Defense Department and its Defense Advanced Research Projects Agency (DARPA) funds much of the US government’s research funding in synthetic biology, with less than 1 percent of total federal funding going to risk research. The report finds that between 2008 and 2014, the United States invested approximately $820 million dollars in synthetic biology research. DARPA’s investments increased from near zero in 2010 to more than $100 million in 2014 — more than three times the amount spent by the National Science Foundation (NSF). "Recent research by the industry group SynBioBeta indicated that, so far in 2015, synthetic biology companies raised half a billion dollars – more than the total investments in 2013 and 2014 combined," says the Wilson Center.

Israel-based OticPharma, Ltd., a privately held company focused on acquiring and developing innovative therapies for ear, nose, and throat (ENT) disorders, early this month announced it has selected the Irvine Co.'s Newport Gateway office complex in Irvine, Calif., to be the location of its new US headquarters. "Establishing our US headquarters is the first step in our strategic plan to build a leading ENT company," said Gregory J. Flesher, CEO for OticPharma, Ltd.

Lincoln Equities Group (LEG) and a team comprising Newmark Grubb Knight Frank (NGKF), HLW International and Real Estate Arts have launched an aggressive campaign to re-brand 5 Giralda Farms as 5G. The four-story, 450,000-sq.-ft. Class A office property (rendering below), formerly occupied by Pfizer, is set on 50 acres of wooded land on the private Giralda Farms campus in Madison, N.J., just off Route 124, one mile from Route 24, and three and seven miles from Interstates 287 and 78, respectively. 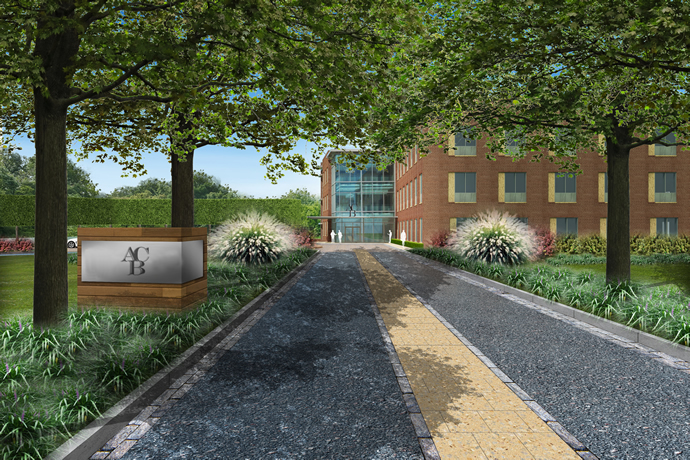 CBRE Group, Inc. announced this summer that it represented Nestlé Skin Health in the 16-year, full-floor lease for 30,400 sq. ft. in the West Tower of the Alexandria Center for Life Science in Manhattan. Nestlé Skin Health will be opening its first innovation hub as part of a global network of research and development centers known as the Nestlé Skin Health Investigation, Education and Longevity Development (SHIELD) network, in 2015. strong life science sector in New York City.”