Carrying signatures and hope from an entire state, the beams at the core of a new cancer center are raised in Omaha. 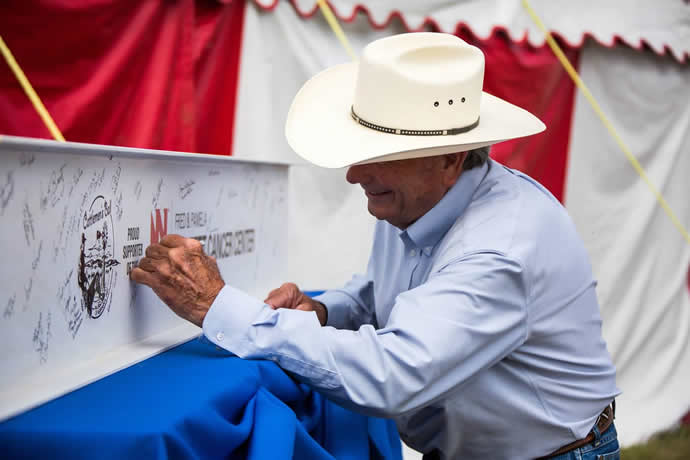 The 2015 Cattlemen's Ball in Nebraska gave attendees an opportunity to sign the beams that in August were raised at the Fred & Pamela Buffett Cancer Center in Omaha.
Photo courtesy of Cattlemen's Ball
by Adam Bruns

On August 13, a topping-off ceremony was held at the Fred & Pamela Buffett Cancer Center in Omaha to mark the completion of the structural framework for all floors of the 10-story research tower and the 8-story patient care areas in the $323-million facility.

The 615,000-sq.-ft. (sq.-m.) building is scheduled for completion in the spring of 2017. It is one of the largest projects ever for the State of Nebraska and the largest for the University of Nebraska. "It is estimated that the Fred & Pamela Buffett Cancer Center will provide 1,200 jobs at the medical center and 4,657 new jobs to the metro area," said a release from University of Nebraska Medical Center (UNMC) and design firm HDR. "It will infuse $537 million annually into the economy." The average salary of those medical center jobs is projected to be $70,000.

HDR is providing professional services including architecture, engineering, programming, concept development, graphic design and healthcare consulting. Kiewit is the construction manager/general contractor. The design incorporates much more than clinical assets, including a healing garden and plans for commissioned artwork through the project's 1% for Art program — about $360,000 has been allocated by the program for public art in the facility.

“We want to make sure healing goes beyond what our patients receive medically,” said Ken Cowan, M.D., Ph.D., director of the Fred & Pamela Buffett Cancer Center, on the occasion of two major artistic commissions announced in early September. “These two large works of art will instantly create an atmosphere of healing for them and play a major role in the healing artistic tapestry we’re creating in this state-of-the art facility.”

Nine different beams were raised during the August ceremony. Over the six months leading up to the ceremony, the beams traveled more than 2,000 miles around the state so people could sign them at events such as the Cattlemen’s Ball, the Ambassador of Hope Gala, and the Nebraska Science Festival. 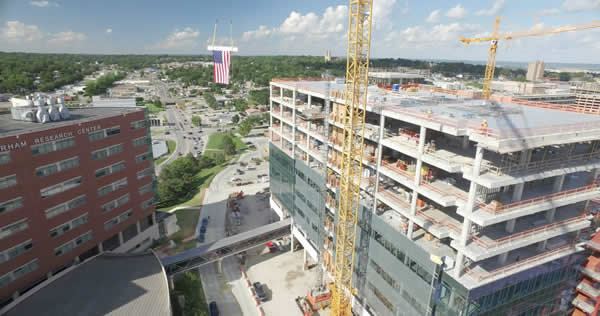 “This is a great moment for our campus, the State of Nebraska and the City of Omaha,” said UNMC Chancellor Jeffrey P. Gold, M.D. “We truly appreciate the tremendous support of the citizens of Nebraska for this incredible project. The beams signed by thousands of people around the state will continuously represent an opportunity for us to pay homage to all our supporters.”

In 2013 it was announced by the university that the cancer center would be named for Fred and Pamela Buffett in recognition of a gift from 1964 alumnus Pamela Buffett, through her foundation, the Rebecca Susan Buffett Foundation, to the University of Nebraska Foundation. Pamela’s husband, Fred “Fritz” Buffett, died in 1997 after fighting kidney cancer. Fred Buffett and Warren Buffett were first cousins.

“The direct impact of the project itself is an increase in payroll of $100 million dollars and 1,200 employees at UNMC and probably another $30 million in operating expenses spent here in the city," said UNMC Vice Chancellor of Finance Don Leuenberger at the 2013 groundbreaking. “The broader impact, though, is in the development that takes place around the campus that is private development. That goes on the property tax rolls. This is what we’re talking about as far as what is necessary to support the additional patients coming on campus — so hotels, amenities, all of those sorts of things.”

"When I started nearly 25 years ago, we had 12 employees," said Mike McDermott, president of the Metro Federal Credit Union, "and Metro Credit Union now has 112 employees in the Omaha area ... Even though we’ve been in business 60 years, more than half of our growth has come in the last decade as UNMC has made significant investments on their campus.”

The 95-member Association of American Cancer Institutes has asked Congress to provide National Institutes of Health funding of at least $32 billion for FY2016, including commensurate funding for the National Cancer Institute (NCI), in order to sustain scientific momentum in the field. NIH appropriations have been just over $30 billion for the past two fiscal years, and the current NIH request includes about $5 billion for the NCI. Among other reasons, cancer incidence in the US is expected to increase by 45 percent by 2030.

At its 2014 annual meeting, AACI incoming president George J. Weiner, MD, director of the Holden Comprehensive Cancer Center at the University of Iowa, announced "The Academic Difference" initiative to collect information about the value of academic cancer centers with respect to clinical care, research, education and economic impact. Through AACI, the information will be shared with various audiences including the general public, leadership at academic institutions, payers, corporations, chambers of commerce and government officials at the federal, state, and local levels.

While those figures are still being accumulated overall, each institute has its own story to tell, including newest AACI member the University of Mississippi Medical Center in Jackson. Cancer institute members, associates and affiliates received millions of dollars in research funding, resulting in an economic impact of more than $16 million for its community.

The spending associated with the nation's best known cancer institute, MD Anderson in Houston, as recently as 2009 represented 2 percent of the entire Greater Houston economy, at more than $13 billion, involving more than $4.5 billion in earnings and more than 82,400 jobs.

A 2001 report found that the University of Virginia Cancer Center created at least 1,535 jobs in the Virginia economy, $127.4 million in total industrial output, $77.8 million in gross domestic product, and $8.6 million in state tax revenue.

There are currently 69 NCI-designated cancer centers in the nation. And even the pursuit of NCI designation can bring a benefit. The University of Kansas Cancer Center achieved that designation in 2012 after a decade of effort. Approximately 1,200 employees, including faculty, research support, clinical and administrative staff are specifically devoted to cancer clinical care and research activities at the institute.

What those figures don't take into account is the staggering cost of cancer in terms of productivity affected by early death. In Louisiana, where a new cancer center is coming to the New Orleans/Tulane Health Sciences Center corridor, it's estimated that productivity cost comes to $400 million annually.

Cancer accounts for nearly one of every four deaths in the US. The Agency for Healthcare Research and Quality (AHRQ) estimates that the direct medical costs (total of all health care costs) for cancer in the US in 2011 were $88.7 billion.

“Cancer touches so many lives and we take great pride here in helping see countless families through this devastating diagnosis,” said Rosanna Morris, interim CEO at Nebraska Medicine. “When you see the skyline changing and you understand the profound impact our vision is going to make, we can’t help but want to get together and celebrate how far we’ve come in the project, knowing it will excel in finding cures for our cancer patients.”

"This new building will bring researchers and clinicians closer than they have ever been and will lead to new discoveries in our approach to precision medicine in cancer care,” said Ken Cowan. It also figures to attract top researchers to the area.

“We will have the best cancer center facility in the world, here in Omaha, in 2017," Cowan said. 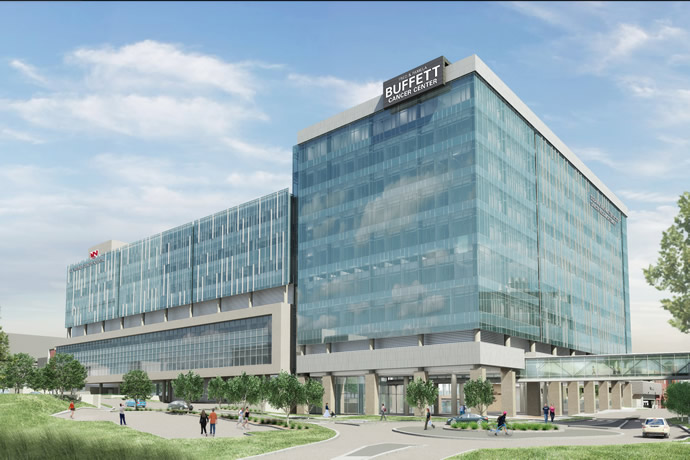 The Fred & Pamela Buffett Cancer Center will be completed in 2017.
Artist's rendering courtesy of HDR