SportsBrain LLC, a healthcare company that specializes in brain safety for athletes, students and military personnel, has announced that it will move its corporate headquarters to Dublin, Ohio, from its current Chicago location. SportsBrain will hire all personnel for its new headquarters locally, creating 17 new jobs in the Columbus region, home to more than 600 bioscience and biotech firms.

“We made the strategic decision to locate our corporate headquarters in the Columbus Region because the area offers the right blend of proximity to sports organizations, a strong university system, a robust healthcare network and cost advantages,” said Kristine Gross, president, SportsBrain LLC. “We look forward to growing our business from Dublin and expanding into other U.S. markets.”

A cybersecurity incident at Dupont Pioneer was central to remarks in late March by Assistant US Attorney General John P. Carlin at the Intellectual Property Protection and Cybersecurity Roundtable at Iowa State University in Ames. Cybersecurity concerns and the threats to biotech were also recently addressed in this commentary from the Wilson Center.

Palo Alto, California–based Varian Medical Systems in March held a groundbreaking ceremony with government officials, leading cancer clinicians and partners for its new 50,600-sq.-ft. manufacturing, service and training facility in Jundiai, Brazil. Located in Multivias Industrial Park, the Varian facility is targeted for completion in the second half of 2017 and will house a radiotherapy training center, demonstration rooms, and manufacturing and warehousing.

"With this new facility, Varian is making a long-term investment to advance the knowledge and access to advanced radiotherapy care in Brazil and across Latin America," said Humberto Izidoro, Varian's managing director in Brazil. 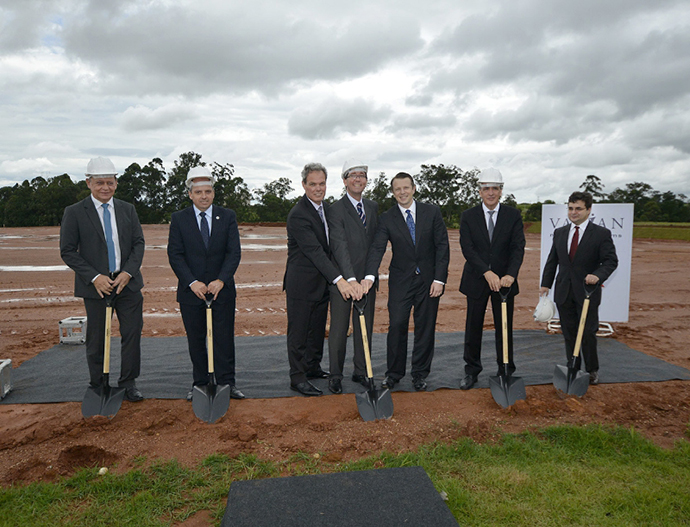 Olympus has announced it will construct a new East Coast national service and distribution center in Bartlett Corporate Park in Shelby County, Tennessee, investing $12 million. The facility will operate as a service and distribution center for a variety of Olympus medical equipment and devices such as endoscopes, surgical devices and generators, and create 280 new jobs.

"In addition to unparalleled products, we strive to provide world-class service to our healthcare customers every day. Our future Bartlett service and distribution center will further enable this goal as we take advantage of the unique logistics and transportation capabilities in the Memphis area, benefit from close proximity to our customers in the eastern United States, and enhance our ability to expedite turnaround times," said Nacho Abia, president and CEO of Olympus Corporation of the Americas.

Valent BioSciences Corporation (VBC) has announced plans to construct a new Biorational Research Center (BRC) as an expansion of its current presence in Libertyville, Illinois. Part of a larger scale R&D investment plan being employed by parent Sumitomo Chemical Company (SCC), the $27-million VBC project includes an approximately 65,000-sq.-ft. build-out for dedicated lab and office space and an additional 20,000 sq. ft. of greenhouse space at Innovation Park. VBC becomes the first occupant at the new 1.2-million-sq.-ft. multi-tenant facility in Lake County, just north of Chicago. VBC will exit its current research site in nearby Long Grove, and expects all of its personnel to make the move.

"This new Research Center is a key part of a continuum of investments being made by Sumitomo Chemical for the development of our biorational business," said Ted Melnik, Executive Vice President and Chief Operating Officer of VBC. "With our new fermentation manufacturing plant in Osage, Iowa, the acquisitions of Pace International and Mycorrhizal Applications, and other recently announced license and business collaborations, we aim to maintain our biorational leadership position for years to come."

ZOOM+, the innovator of on-demand healthcare and performance health insurance, in March announced it will relocate corporate headquarters from Hillsboro, Oregon, to the Pearl West in Portland's Pearl District on January 1, 2017. The new headquarters, envisioned as a "basecamp for global healthcare innovation," will occupy 30,000 sq. ft. on the fifth and sixth floors of the new Pearl West. ZOOM+Basecamp will be home to over 300 medical professionals, technologists, designers, and insurance and finance experts.

"ZOOM+ attracts amazing thinkers, builders, and doers from across the country. People want to join an innovative company and experience the collaborative and creative culture of iconic downtown Portland," said Gaylyn Sher-Jan, chief people officer for ZOOM+. "Relocating immerses ZOOM+ among other great innovators, and gives ZOOMers easier access to urban living, excellent mass transit and a thriving arts and entertainment scene. We are enhancing our recruiting and retaining of the best people."

The International Air Transport Association's (IATA) 2015 designation of MIA as the first pharma freight hub in the U.S. and the second in the world after Brussels Airport is expected to increase the activity of an already growing industry. The total value of pharma products transported through MIA increased by 79 percent since 2010 to $3.3 billion in 2014.

In March, Johnson & Johnson Innovation LLC opened JLABS @ TMC, a new 34,000-sq.-ft. life sciences incubator in Houston. The new JLABS facility, the fifth in the US can accommodate up to 50 startups, and will open with 21 companies that represent a range of disciplines and geographies. The Houston site is the first to open with a medical device prototype lab, including a 3D printer. JLABS sites also operate in San Diego (flagship), San Francisco, South San Francisco and Boston, with a new site opening in Toronto this spring as well.

"We have been eagerly awaiting this day when JLABS @ TMC opens its doors and immediately enhances our already robust ecosystem of talented entrepreneurs who are solving the greatest unmet healthcare needs of our generation," said Robert C. Robbins, M.D., President and CEO of the Texas Medical Center. "TMC has spent decades making healthcare history, and now these business accelerators housed at TMC will take innovation to new heights."

The Medical Gas Solutions Division of Atlas Copco's Compressor Technique Business Area, along with the BeaconMedaes U.S. Customer Center, will move into a new 180,000-sq.-ft., $20-million facility at Riverwalk Business Park in Rock Hill, South Carolina, expected to open in April 2017. The division will continue its production and manufacture of medical gas equipment, including medical air vacuum plants, manifolds and pipeline components, in the new facility located just minutes from its current home in Rock Hill.

Atlas Copco said it chose Rock Hill as its new headquarters because of the city's resources for economic development of commercial and industrial businesses as well as its proximity to the large metropolitan area of Charlotte and the East Coast.

WuXi AppTec Co. Ltd., an open-access R&D capability and technology platform company serving the global pharmaceutical, biotechnology, and medical device industries, announced early this year that it has started construction of an integrated biologics solution center at the company's headquarters in Shanghai. The company plans to invest a total of $120 million in the dedicated, 250,000-sq.-ft. facility, which will be operational in 2017 and accommodate 800 scientists. The facility will provide integrated solutions from ideas to the clinic for biologics discovery, development, and clinical manufacturing on a consolidated campus.

Purdue University is investing more than $250 million in the life sciences over the next five years to advance research that both improves lives and supports Indiana’s critical life sciences business sector. The funding includes Purdue’s recently announced Pillars of Excellence in the Life Sciences Initiative, which established the Integrative Neuroscience Center and Institute for Inflammation, Immunology and Infectious Disease, complementing the Purdue Moves’ Drug Discovery and Plant Sciences initiatives.

“Just as in the 2013 choice of two focused research projects, the selection of the two new ‘pillars’ was the result of a careful and deliberative process led by faculty at each step,” said Purdue President and former Indiana Governor Mitch Daniels. “A first-stage review concluded that the life sciences was the sector where Purdue has the greatest unexploited research potential. A second-level inquiry chose the two areas for major investments. We are already seeing important results. Forty Purdue-developed drugs are in the pipeline, the university achieved a record $401 million in sponsored research funding this past year, and many strategic partnerships with national labs and private-sector companies have been forged.”

“Indiana has a major stake in the 21st century life sciences sector, which delivers a $59 billion impact and makes an outsized contribution to our economy," said David L. Johnson, president and CEO of BioCrossroads, Indiana’s initiative for life sciences collaboration and growth. "Purdue University’s research excellence and economic engagement have always forged a critical component of that success, and with this exciting new commitment from Purdue, we are far better placed to win in the global competition for life sciences talent, innovation and investment.”