From Inversion to Investment

Not one to pout after a failed merger, Allergan makes yet another wager on Waco. 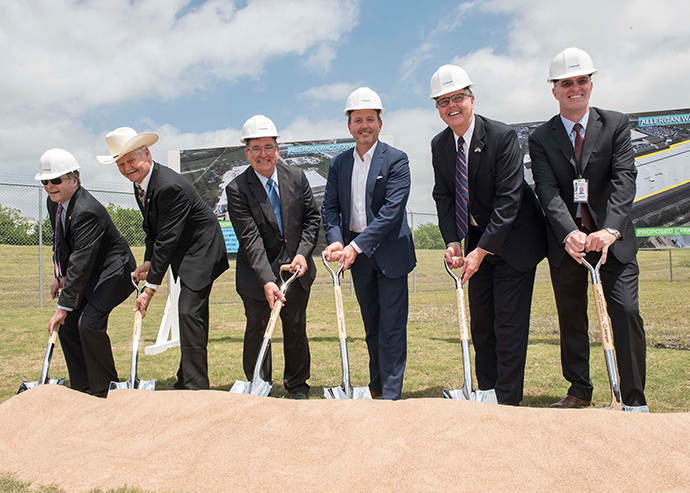 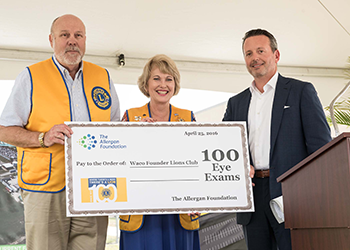 If there's ever a good place to get back on your horse, it's Texas.

On April 6, Dublin-based global pharmaceutical firm Allergan announced that its planned $160-billion acquisition by Pfizer, originally announced in November, had been terminated by mutual agreement, following the US Treasury Department's further inquiries into the transaction as the Obama administration ratcheted up pressure on corporate inversions.

"While we are disappointed that the Pfizer transaction will no longer move forward, Allergan is poised to deliver strong, sustainable growth built on a set of powerful attributes," said Allergan CEO and President Brent Saunders that day, thanking his 30,000 employees for their professionalism, and noting a product development pipeline containing 70 mid-to-late stage programs, including 14 expected approvals and 16 regulatory submissions in 2016 alone.

Among the powerful attributes pumping that pipeline is the $23-billion company's 750-employee manufacturing plant in Waco, Texas, where this week, 19 days after the Pfizer merger was called off, Allergan and community officials broke ground on a $200-million expansion.

The investment will add 322,000 sq. ft. (29,915 sq. m.) of manufacturing space to the current facility, nearly doubling its current footprint. "Once completed, the expansion is expected to add approximately 100 full-time jobs, with the potential for the expanded operations adding as many as 250 full-time jobs as the facility reaches full utilization," said the company. "New positions that will be added include chemists, microbiologists, process engineers and production and maintenance technicians."

The expansion will add a new raw material dispensary, an automated bulk formulation suite and ten new production lines as well as warehousing space. Upon completion, the Waco facility will be capable of producing more than 40 different product formulations and will increase its production capacity by more than 50 percent. The construction, commissioning and validation of the facility expansion and production processes are expected to be completed by 2020.

Allergan's Waco facility is the Company's flagship manufacturing facility for its leading eye care products. Concurrent with the groundbreaking, the Allergan Foundation donated 100 eye exams to the Waco Founders Lions Club (in recognition of Lions Club International’s 100-year anniversary) to initiate a pilot project coordinating with local eye care professionals to support eye exams for those in need in the Waco community.

"Today's groundbreaking marks an important milestone for Allergan, strengthening our commitment to our people, operations and the partnership we have built with Waco and the Central Texas communities for 27 years," said Saunders. "This investment will add highly-skilled jobs to the Waco and Central Texas economies, elevate our manufacturing capabilities and increase our ability to provide more complex medicines to more physicians and their patients around the globe.

"As we celebrate this expansion today, it is important to remember that it was achieved through great collaboration between Allergan and the local Waco and Texas state governments and chambers who have been great partners in providing a positive business climate for our success. It is through these open collaborations that companies like Allergan can continue to succeed in providing important products, needed innovation and highly skilled jobs for Texas and the US economy."

Allergan, best known for its botox treatment, is pursuing what it calls a new industry model, "Growth Pharma," a concept it elucidated after its March 2015 acquisition by Actavis as based on principles including a diverse revenue stream, a focus on late-stage R&D, and a lean cost structure with low administrative overhead. The Actavis deal was the company's fifth since 2012. The company reverted to the Allergan name in June.

Allergan's supply chain features 40 manufacturing and distribution facilities around the world, and includes Anda, Inc., a US pharmaceutical product distributor. Allergan also develops and out-licenses generic pharmaceutical products outside of the US through its Medis third-party business. The Dublin company's US administrative headquarters is in Parsippany, New Jersey.

According to the Conway Projects Database, this is Allergan's fourth investment at Waco since 2009. Other investments in that time include a $12-million, 387-job R&D infusion in Bridgewater, New Jersey, in 2011, a medical device investment in Heredia, Costa Rica, in 2012, a call center investment in Austin, Texas, in 2014, and a manufacturing investment in Antioch, Illinois. The records also show multiple investments in Ireland, including a $350-million, 200-job investment in Westport, County Connacht, in 2012 — proving that while inversions to Ireland may be construed as phantom maneuvers, there is plenty of substance there too.

That said, Waco has its own Irish lineage: It's located in McClennan County, after all, and one of its most notable pieces of architecture is the McDermott Motors building.

"I applaud Allergan for their continued commitment to Waco, and this expansion which will create important new jobs for highly skilled Texas workers in our growing life sciences industry," said Texas Lieutenant Governor Dan Patrick.

"As a member of Congress, I have worked to ensure that our federal laws and policies equip the private sector with the resources and flexibility necessary to be at the forefront of medical innovation for individuals living with serious illnesses and conditions," said US Congressman Michael C. Burgess, M.D. (R-Texas), whose further comments took aim at the ailments back in Washington. "As a country, we must maintain our commitment to creating a positive business environment that attracts the best and brightest to invest in innovation — this requires providing a competitive corporate tax policy, transparent and consistent regulation, and a strong and skilled workforce able to help produce complex medical products. If we are successful in doing these things, we can strengthen our economy and improve the lives of all Americans. I am pleased that Allergan has decided to invest its best and brightest to advance innovation in Texas."

Federal scrutiny of a more positive sort highlighted Allergan in March, when the US EPA conferred its ENERGY STAR 2016 Partner of the Year – Sustained Excellence Award on the company for its continued improvement of energy performance and leadership in energy management in both the pharmaceutical and industrial sectors. It was the fifth time the company, which has been an ENERGY STAR partner since 1996, had been recognized by the EPA.

An independent study released in January by the Baylor University Center for Business & Economic Research found that Allergan's Waco operations generated a combined economic impact on Waco area income of $263 million and an aggregate impact on total spending of $406 million in the Central Texas economy in 2015. The economic impact was a direct result of the company's strong employment and labor force earnings at its Waco facility, with employment increasing by 28 percent and its labor force earnings increasing 39 percent in the period between 2010 and 2015.

"As a partner in the Waco and Central Texas communities for 27 years, we are very proud of the significant impact Allergan has had on the local and regional economies here. Our 750 colleagues in Waco have played an important role in bringing important medicines to patients in 110 countries," said Saunders. "Our rich history and impact in Waco and Central Texas has not been achieved alone. It has been made possible by the strong mix of highly skilled and talented people, access to and collaboration with respected health care professionals and medical institutions like Baylor University and the unwavering support of local, state and federal elected officials and trade associations that make Waco and Texas a great business partner for companies like Allergan."

"Allergan has been a very strong partner to the Waco business community throughout its 27-year history, and the findings of this study underscore the impact of that partnership," said Tate Christensen, chairman of the Greater Waco Chamber of Commerce. "We applaud their important work in developing important medicines for patients and healthcare professionals, and look forward to continuing to strengthen our relationship and supporting their impact on the Waco economy in the years ahead."

At the groundbreaking this week, Tom Kelly, Ph.D., of the Baylor Center for Business & Economic Research in Baylor's Hankamer School of Business, provided a supplement to that previous analysis that found: 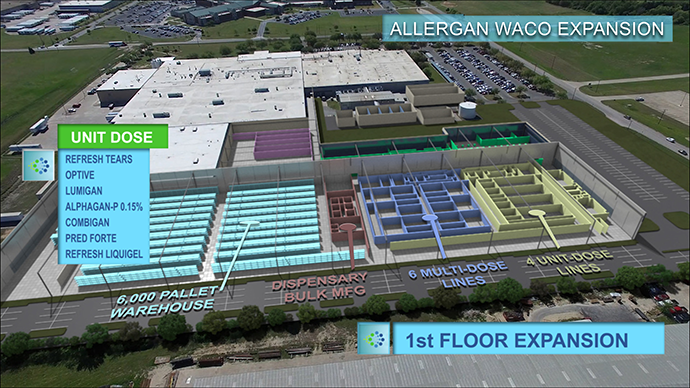 An aerial of Allergan's expansion plan in Waco puts a different spin on the company's concept of "Growth Pharma."