Southwest Research Institute (SwRI) and The University of Texas at San Antonio (UTSA) Office of the Vice President for Research in early July announced two new research projects through the Connecting through Research Partnerships (Connect) Program. The projects are slated to begin Sept. 1, 2016, with each receiving $125,000 in funding. The two projects will investigate biofilm corrosion in pipelines and an ultrasound drug delivery methodology.

Over the past six years, 11 projects have been funded under the joint SwRI-UTSA Connect Program.

“Fostering collaborative opportunities for researchers from our two institutions has led to scientific discoveries and advanced technologies. The Connect program continues to surpass our expectations," said SwRI Executive Vice President Walt Downing. “Our funding selection committee is looking to fund research that finds solutions for specific challenges” said Dr. Bernard Arulanandam, UTSA interim vice president for research. "This year, with the two chosen projects — precision medicine and pipe corrosion in the petroleum industry —we can have a systemic impact on the people, and the industries, of Texas.”

HDR’s sustainable development team has launched a wellness dashboard tool that measures wellness design cost benefits in the built environment by providing hard metrics for clients during the early design stages. "The tool analyzes the physical environment and overlays peer-reviewed research to determine the impact on an occupant’s stress, safety, effectiveness, quality of work and overall behavior," says the company. "The dashboard captures information on the quality of air and water, connections to nature, beneficial acoustics, fitness and nourishment, for example."

“A typical design process results in the removal or value engineering of design elements that benefit health and wellness even though they have a more immediate payback than utility savings from energy and water conservation measures,” says Colin Rohlfing, director of sustainable development for HDR's architecture company. “This changes that." Rohlfing helped launch the beta version of the tool in June at London’s European Healthcare Design conference.

Every happenin' place needs a microbrewery around the corner. In the case of Philadelphia's University City Science Center (UCSC), the key to microbrew may be right inside its own walls, in the form of microdroplets. Fermento, the Port incubator's newest resident recently won the University of Pennsylvania’s Y-Prize Competition, and now is occupying lab space at the Port to further develop the technology behind its Microdroplet Maker. "With this technology, brewers will be able to ferment beer up to three times faster than by traditional methods," says a UCSC release. "By streamlining the fermentation process, brewers can avoid the often weeks-long bottleneck that can occur when waiting for yeast to convert sugar to alcohol." After all, the only kind of bottleneck young scientists like is a cold one made of glass.

Two other startups, BioSignal Analytics and SphereVis LLC, have also recently moved into the Port. Graduate firms and current residents of the University City Science Center’s business incubators support one out of every 100 jobs in Greater Philadelphia and drive nearly $13 billion in economic activity in the region, according to new analysis released in June by the Economy League of Greater Philadelphia and Econsult Solutions, Inc.

After a four-year investigation, the Canada Revenue Agency (CRA) announced in late July it has assessed more than 1,000 pharmacists for what it says are unreported benefits they received from generic drug companies, such as gift cards, travel vouchers, and pre-paid credit cards. The CRA says that the total unreported income is more than $58 million. "Although no criminal charges were laid, financial penalties for failing to report the benefits as income were levied on those who did not take up the CRA’s offer to voluntarily correct their returns," says analysis by Fasken Martineau, noting that bulk reviews, or "projects," in a particular industry are CRA’s way of efficiently tackling an area where it suspects widespread non-compliance or abuse. "A taxpayer who becomes aware of a project in their area of business and finds themselves in a position that may attract CRA attention, may want to consider consulting legal counsel about the CRA’s Voluntary Disclosures Program (VDP)."

In 1663, the University of Uppsala in Sweden opened one of the first anatomical theaters in Europe built into the cupola of the Gustavianum, the main building on the campus. It has helped turn the city into a center of medical innovation. So much so that today, Uppsala is a world-class biotech and medical research center. Now GE Healthcare and the government of Sweden are opening a new research hub in Uppsala focused on biologics. 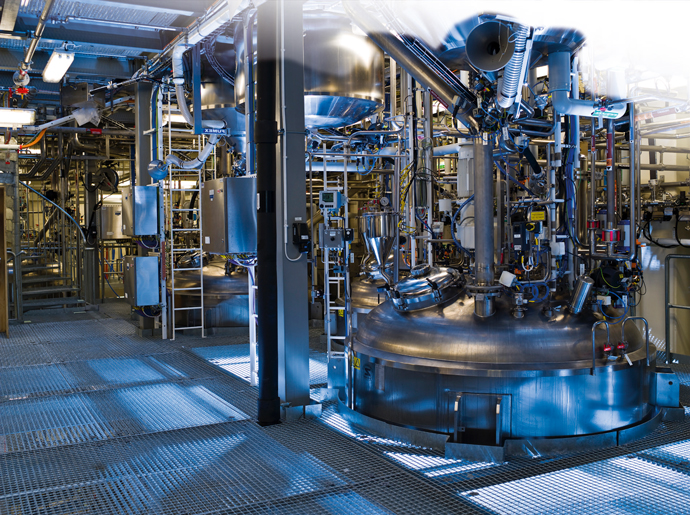 GE’s facility in Uppsala is one of the world’s biggest production facilities for manufacturing of chromatography media.
Photo courtesy of GE Healthcare Life Sciences

The International Institute for Sustainable Laboratories (I2SL) Emerald City Chapter meeting (pictured) took place in June in Seattle, convening experts from such organizations as Battelle, Pacific Northwest National Laboratory (PNNL), the Fred Hutchinson Cancer Research Center, and HDR to discuss how to optimize organizational policies and procedures to improve quality and sustainability performance in laboratories. Kerry Cobb of Batelle reviewed how to implement Good Laboratory Practices (GLPs), regulations that provide a quality system of management controls for laboratories to assist with ensuring the uniformity, consistency, reliability, reproducibility, quality, and integrity of non-clinical safety studies. And Kathleen Judd of PNNL discussed how the lab’s Sustainability Program aims to improve triple-bottom-line performance by targeting changes in occupant behavior, technology selection, and organizational policies and procedures.

Photo courtesy of HDR and I2SL

One year after relocating its warehouse and distribution operations to the huge SubTropolis underground development in Kansas City, Missouri, in 2015 in order to be closer to its North American headquarters in Lenexa, Kansas, Ceva Animal Health has expanded its underground footprint there to 90,000 sq. ft. "The consistent conditions and ability to easily expand were two key reasons we chose SubTropolis for our facility,” said Craig Wallace, CEO and North America/Pacific Zone Director at Ceva Animal Health. The company employs approximately 450 people in the Kansas City region.

SubTropolis, developed by Hunt Midwest, has more than 6 million sq. ft. of contiguous underground space available and the potential to develop an additional 8 million sq. ft. said SubTropolis offers utmost flexibility to accommodate growing companies like Ceva Animal Health. “The ability for a company to easily scale its operation is often paramount to a user’s decision-making process,” said Hunt Midwest President and CEO Ora Reynolds. “Space in SubTropolis can be built out much quicker as there are no weather delays or lengthy permitting processes.” SubTropolis was created through the mining of a 270-million-year-old limestone deposit. In the mining process, limestone is removed by the room and pillar method, leaving 25-ft.-square pillars that are on 65-ft. centers and 40 feet apart. SubTropolis is home to more than 50 local, regional, national and international companies that employ in excess of 1,600 people.

Design and innovation office Carlo Ratti Associati, in collaboration with Eataly food company and the Bologna agri-food market (CAAB), announced this week it has designed a prototypical pavilion where people can engage with digitally-augmented farming and grow their own food on-site. The project pairs sustainable agricultural practices with online data collection, paving the way for a new type of collaborative, in-store cultivation system in which anyone can become an organic food producer.

The pavilion will be among the highlights of FICO Eataly World, the new 80,000-sq.-m. (861,140-sq.-ft.) "edutainment park" focused on food production and nutrition, currently under construction in Bologna, Italy. FICO is the acronym of Fabbrica Italiana Contadina (Italian Farms Factory); but FICO also means, in Italian, fig and, in slang, cool. 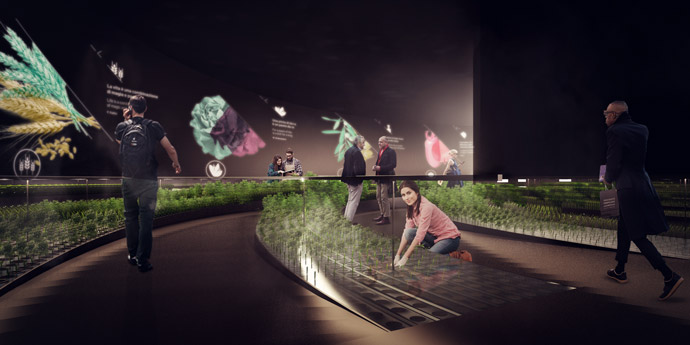 Ground was broken in the spring for the new R&D headquarters of Octapharma AG in Vienna, Austria. Designed by ATP Vienna together with ATP sustain, the facility brings under one roof approximately 100 employees from the company's R&D Plasma division and its clinical research operation. "The building is designed to facilitate changes of use with the appropriate rebuilding measures and the relationship between the offices and laboratories can be flexibly adapted," says ATP. "Another challenge is the short overall project duration of just two years from the design start to completion," which is expected in May 2017. Vienna has been home to Octapharma's largest production operation since 1989, and it has become one of the world's most up-to-date plasma fractionation facilities.