New growth at the Hong Kong Science Park is just one aspect of the city's innovation-driven ecosystem. 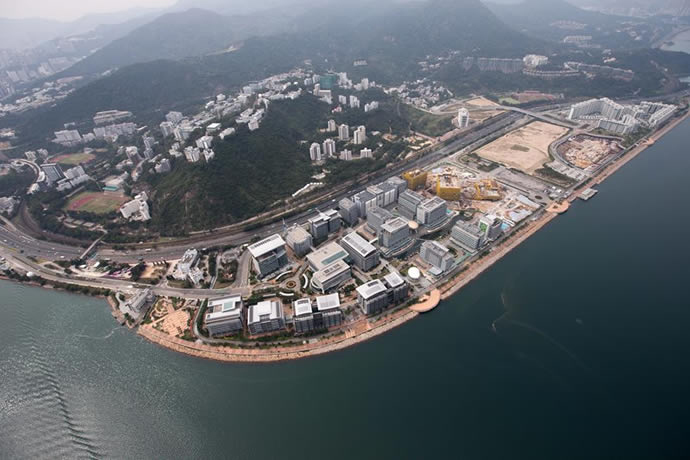 Hong Kong Science Park is home to more than 600 companies and more than 12,000 employees and entrepreneurs — 75 percent of whom work in R&D-related activities.
Photo courtesy of Hong Kong Science & Technology Parks Corporation
by Adam Bruns

Hong Kong last May was named once again as the world's most competitive economy by the International Institute for Management Development (IMD) World Competitiveness Yearbook. But that doesn't mean its freewheeling approach extends to healthcare.

Just ask Eugene Hanratty, III, the Atlanta-based senior consultant to the Hong Kong Economic & Trade Office, who met with me last summer along with the office's director and longtime Hong Kong leader Steve Barclay. Hanratty found himself getting more ill and in pain by the moment during a trip to Hong Kong a few years ago.

"The guys said to call for an ambulance," he remembered. So there was the ER, a doctor's exam, urinalysis, an EKG, another test or two, followed by another doctor's exam and five prescribed medications. Then my colleague said it was time to check out and pay. I was thinking, 'Oh my god.' The doctors here in Atlanta told me later it would have been between $5,000 and $10,000 here. It was a bit more expensive in Hong Kong for me as a non-resident — I paid $125."

"People know Hong Kong as one of the most capitalist, laissez-faire cities in the world," said Barclay, a longtime public sector reform advocate. "If they knew the truth about Hong Kong, some in America would call it a Marxist state. We provide comprehensive healthcare for our population. You can walk into a government clinic or hospital for treatment, and it doesn't matter if it's for a scratch on a child's knee or brain surgery — you will be charged about US$15 a day for your treatment. That includes your bed, food, everything. There are private hospitals, if you want nicer curtains in your private room. But if you want quality healthcare at affordable prices, you go to a government hospital."

That's among the reasons that both men's and women's life expectancy in Hong Kong is perennially among the top three in the world. Yes, inequality issues are rearing their heads in Hong Kong like everywhere else in the world, in areas such as affordable housing. "But we provide heavily subsidized housing for nearly 50 percent of our population," said Barclay, noting the city's advanced public transit system. "We provide 12 to 14 years of free education in government-funded schools for anybody who wants it. And for that quality of life, you'll pay a maximum of 15 percent income tax."

Establishing infrastructure for company innovation that's on a par with the area's innovative public infrastructure is one mission of Hong Kong Science and Technology Parks Corporation (HKSTP), which since 2001 has built up a campus that now is home to more than 600 tech firms and more than 12,000 employees and entrepreneurs — 9,000 of whom are involved with R&D-related activities. Those firms together have an estimated annual turnover of around HK$165.9 billion (US$21.4 billion). Science Park incubatees and graduates have cumulatively registered 907 IPs (i.e. patents) and obtained a total of about HK$1.65 billion (US$213 million) in angel funding and venture capital investment as of October 2016. 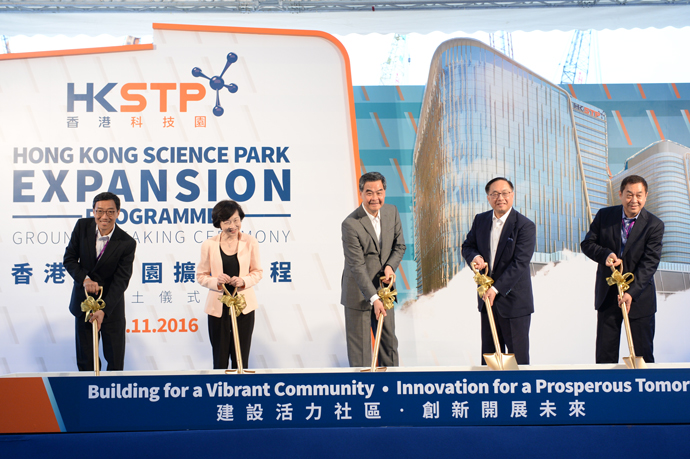 The park welcomed two new developments over the past month that figure to increase life sciences activities even more.

“We see opportunities for Hong Kong to evolve into a cell therapy center, capitalizing on Hong Kong’s world-class medical system, and credible clinical trial centers with data accepted by FDA, EMA as well as CFDA, which is unique to Hong Kong," said The Hon. Fanny Law, chairperson of HKSTP, while pointing out the need for clear regulatory guidelines that facilitate clinical translation of advanced cell therapies while safeguarding the interests of patients. "Our ambition is to grow an industry in advanced therapy medicinal products, leveraging on the complementary strengths of Hong Kong, Guangzhou and Shenzhen, to form a leading ‘Cell Therapy Valley’ where the latest technologies are being developed, tested and implemented for the benefit of ethnic Chinese patients who suffer from existing incurable diseases."

The news follows the October establishment of Ming Wai Lau Centre for Reparative Medicine, at Hong Kong Science Park by Sweden's Karolinska Institutet. The park is home to 14 other stem cell and cell therapy companies from around the world.

In late November, HKSTP held a groundbreaking for its latest expansion, which will see the addition of two purpose-built R&D-fit office buildings totaling 29 floors between them, part of a HK$4.4-billion (US$567-million) expansion program approved by the Hong Kong Government earlier this year. The new towers are expected to provide approximately 74,000 sq. m. (796,555 sq. ft.) of additional office space (around 22 percent more than at present) when completed in 2020.

"HKSTP's goal," said HKSTP CEO Albert Wong, "is to double the size of the startup community in the park and attract more leading overseas technology corporations to our ecosystem in the coming few years." 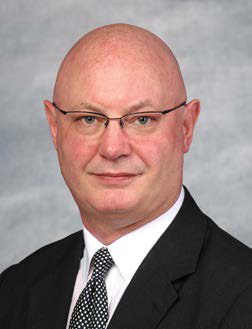 Framing in more buildings is one thing. Building a regulatory framework is another.

At the stem cell conference, Prof Marc Turner, medical director of the Scottish National Blood Transfusion Service, reported that a group of leaders in the field suggested a single stream of legislation covering supply of starting materials, manufacture, administration and follow up.

“Since Hong Kong has a relatively clear space, our advice would be to join up tissue and cell legislation with cellular therapy and advanced therapy legislation all in one piece, to be consistent," he said in a HKSTP press release. "That would be the most coherent way to do it, therefore in the longer term it will be the most efficient."

In his conversation with Site Selection earlier this year, Steve Barclay, a former internal management consultant in the Hong Kong Government’s Efficiency Unit, had some insights on regulations and IP in particular — not only in regard to Hong Kong, but to China's legendary disregard for IP rights.

"We have a very sophisticated and effective IP regime in Hong Kong — you'd expect to hear that from one of the people who helped develop it," Barclay said. "We were one of the first jurisdictions in the world to introduce service marks — trademarks for services rather than goods." Hong Kong also lived up to its reputation for efficiency by combining its patent office with its IP rights office. "One of the things we are working on in Hong Kong at the moment is establishing Hong Kong as an IPR [intellectual property rights] trading hub. You have companies with IP rights and branding, and you have companies that can manufacture stuff. Bringing the two together is not as easy as you might think."

Did he think China's decades of looking the other way when it comes to stealing ideas might evolve? Barclay's not entirely convinced, but there's hope.

"I do think, as any economy matures, its attitude to other people's IPRs matures as well," he said. "In every economy, whether America or European countries, when they start industrializing, they're very happy to 'learn from others.' But once they start developing their own IPRs, their attitude to enforcement of the IPRs changes considerably. I think China is now in that phase. Nobody's pretending it's going to disappear as a problem, but I think the degree of the problem is going to diminish in the coming years. That ties in with the trading hub. The possibility of a legitimate commercial deal with a rights holder versus greater risk of an enforcement action if you don't do it properly ... people start making rational decisions."

That sort of attitude adjustment — a shift in ideological infrastructure, you might say — fits right in with the efficiency and ambition on display at Hong Kong Science Park.

"Earlier this year, we celebrated the 15th anniversary of HKSTP," said Law on the occasion of the Hong Kong Science Park groundbreaking last month. "Given the encouraging progress over the past two years, I believe, if we continue on this path with the time-honored Hong Kong spirit and efficiency, and with all stakeholders working together in concert, Hong Kong would rank among the top 10 global startup ecosystems, and be widely recognized as an innovation hub in Asia in future."

Chances are, Mrs. Law, it already is. 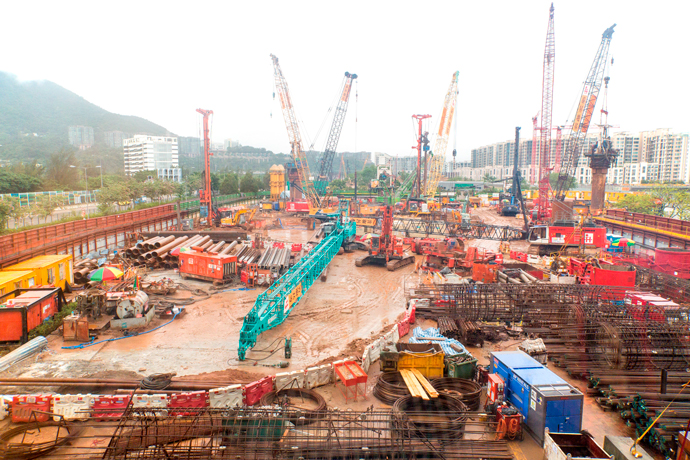