Merck Plants a Research Stake in the Bay Area

The company is the latest explorer seeking discovery in the DNA of South San Francisco. 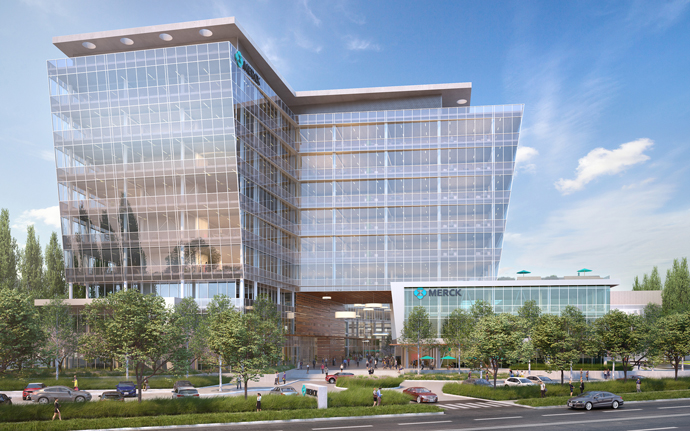 The nine-story research campus Alexandria is developing for Merck will include enough auditorium seating for the 300 scientists and staff expected to populate the facility by completion in 2019.
Rendering courtesy of Alexandria Real Estate Equities, Inc.
by Adam Bruns

Merck (known as MSD outside the US and Canada) executed a long-term, full-building lease for a nine-story laboratory/office campus with 294,000 rentable sq. ft. Construction will begin in early 2017 on the building, targeted for LEED Platinum certification, with Merck's move-in scheduled for early 2019.

“We are excited to partner with Alexandria on this new state-of-the-art research center located in the heart of the Bay Area’s life science community,” said Dr. Roger M. Perlmutter, president of Merck Research Laboratories. “We are honored to expand our strategic relationship with Merck, one of our current tenants, as the company establishes its San Francisco Bay Area R&D hub,” said Joel S. Marcus, chairman, chief executive and founder of Alexandria Real Estate Equities, Inc. “This move is significant for Merck and South San Francisco, bringing another leading pharmaceutical player to the vibrant biotech and pharma community and reinforcing the Bay Area as a leading cluster for discovery and collaboration.”

"Earlier this year, Merck Research Laboratories (MRL) embarked on a plan to expand our U.S. discovery footprint in areas where biomedical research is converging, including the San Francisco Bay Area and Cambridge, Massachusetts," writes Merck spokesperson Doris Li in an e-mail reply to an inquiry from Site Selection. "The new site in South San Francisco builds upon our longstanding research presence in Palo Alto, California, where more than 100 Merck researchers currently focus on immunology, oncology and biologics discovery research. This site, however, will not support our intended level of expansion.

Research will span exploratory research through early development, says Li. While the new labs are being built, Merck will start research operations in early 2017 at two buildings nearby on Gateway Boulevard in South San Francisco, where the initial focus will be on cardiovascular, metabolic and renal diseases. "Active recruiting for world-class scientific talent is underway," she says. The company expects to hire approximately 100 scientists to work in South San Francisco in 2017. Upon completion, the new facility will hold more than 300 scientists and staff — exactly the number of seats in the forthcoming facility's auditorium. In addition to ample green space and openness, the campus will feature a fitness center, and a café and terrace with waterfront views.

Talent Worth the Price

Say “San Francisco” and the first thing many think of is the exorbitant cost of real estate and daily life. Asked how the company manages this challenge, Li says, "We offer a highly competitive relocation, compensation and incentive structure, based on local market conditions."

Alexandria's Richardson, who has seen the market evolve over 30 years living and working in the area, says the high costs are always being discussed among his friends and colleagues. But at the end of the day, the high cost is part of the deal. 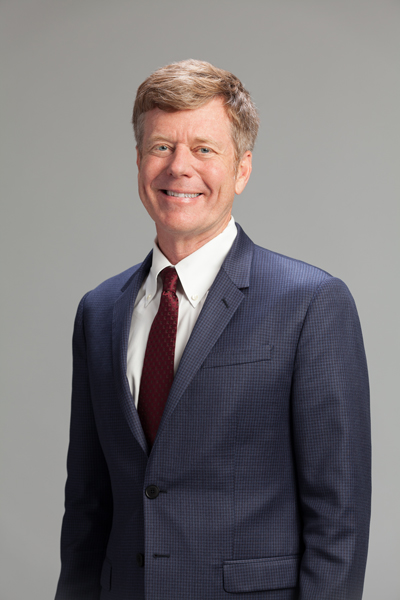 "It is a higher-priced area, and there's a reason for that."
— Steve Richardson, COO and Regional Market Director of San Francisco, Alexandria Real Estate Equities, Inc.

"It is a higher-priced area, and there's a reason for that," he says. "You have some of the most creative and brilliant people living in the Bay Area, in life sciences and technology, developing products and services that are global in reach and transformative. That engine is alive and well and healthy. Ultimately the value of the real estate and the pricing are very sustainable. In turn you're attracting super-high-quality companies with very creative and brilliant people."

As evidence that costs are not prohibiting growth, Richardson says Alexandria's space in the area is 99.8 percent leased — "So it's a high-class problem," he says. "We don't have enough space for our existing clients, but we're working closely with them to meet their needs one way or the other. The Merck project is the fourth in the area under construction. The other three are in the Mission Bay and SOMA areas. This will bring us to 1 million square feet of construction in the pipeline in the Bay Area, and that's also 100-percent leased."

Asked how the new site builds on Merck's past presence, Li says, "In discovery research, Merck is looking for a greater diversity of new insights and approaches that will lead us to a deeper understanding of human disease biology so that we can continually improve our ability to discover high impact medicines and vaccines. The goal of our new discovery sites is to create new research environments in Cambridge and South San Francisco, two important hotbeds of scientific exploration, to bring new expertise and capabilities to Merck that complement our existing R&D strengths, and more fully integrate within these biomedical ecosystems to encourage increased external collaboration.

"Merck research in South San Francisco will be an integral part of our existing R&D network, including operations in California, Massachusetts, New Jersey and Pennsylvania," she explains. "Upon completion of the new site, the immunology, oncology and biologics discovery research will transition from Merck’s Palo Alto research facility to the new site."

Alexandria had a total market capitalization of $13 billion and an asset base in North America of 24.5 million sq. ft. as of September 30, 2016, with key clusters in Greater Boston, San Francisco, New York City, San Diego, Seattle, Maryland and North Carolina's Research Triangle Park.

The company's new site at 213 East Grand Avenue will offer Merck a long-term real estate solution in close proximity to academic research and startups, and to the city’s new mixed-use, transit-oriented neighborhood between the site and the new Caltrain station.

Alexandria's Richardson says that the Alexandria team undertook a series of presentations and discussions with Merck leaders in New Jersey shortly after the company had announced its intention to establish a flagship research facility in the Bay Area last summer. Among the reason's Alexandria's offering stood out, he says, is its marquee location.

"The site is very prominent in San Francisco," he says. "You get off the East Grand exit on 101, and this is the gateway to the southern portion of San Francisco. I believe Merck was intent on establishing a clear presence in this historic cluster of biotech in South San Francisco. This facility will certainly do that."

The developer has experience with iconic campuses. Over the past half a dozen years, says Richardson, half of Alexandria's ground-up projects have been occupied by single tenants, with the other half anchored by a tenant taking at least a third or half of the facility.

Accessing brainpower at area institutions is "absolutely critical and essential" for tenants like Merck, says Richardson. "The ability to attract talent, PhDs, is fundamental to their business. Being part of that ecosystem is essential. It's a big pharma megatrend to be proximate to big institutions or ecosystems like South San Francisco that have big, small and emerging-stage companies."

Case in point: the University of California, San Francisco (UCSF), which Richardson calls "probably one of the more prolific generators of IP that has turned into companies. We recently hosted Mark Zuckerberg and Priscilla Chan in San Francisco as they launched their Chan Zuckerberg Initiative, with $600 million for new tools to advance science." UCSF generates nearly 43,000 jobs and produces an estimated $8.9 billion economic impact, according to a 2016 report.

Vibrant, dynamic institutions like UCSF "really act as a catalyst and engine for future scientific discoveries and breakthroughs," says Richardson. 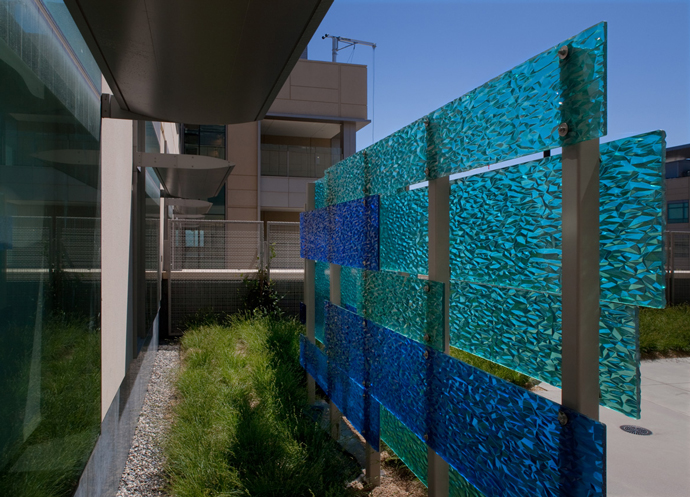 UCSF Medical Center at Mission Bay opened in early 2015. UCSF, the only campus in the 10-campus University of California system that is exclusively focused on the health sciences, is the nation’s top public recipient of funding from the National Institutes of Health (NIH).
Photo courtesy of UCSF