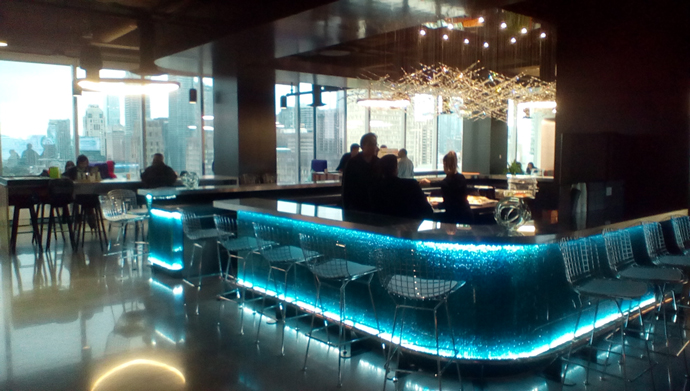 The JLABS lounge at its new site in Toronto overlooks an incredibly dense network of hospitals, academia, research and government, including the MaRS building next door and the Ontario Parliament (below) across the street.
Photo by author
by ADAM BRUNS

Quick: Where were both insulin and stem cells discovered?

If you said Canada's largest city, give yourself a red maple leaf. And the heritage of innovation from those discoveries endures today. 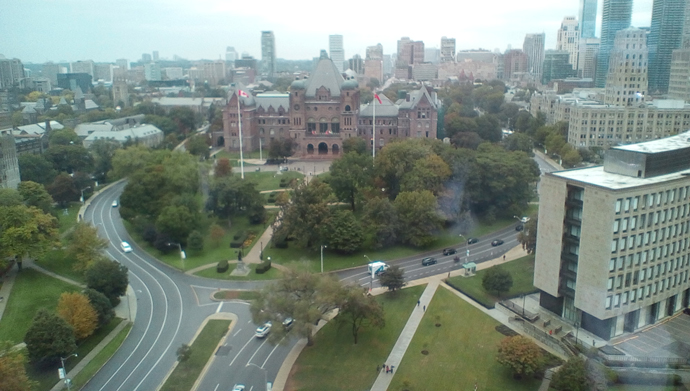 Smack in the middle of the third largest life sciences district in North America, Johnson & Johnson's new JLABS site in Toronto is taking advantage of the region's more than 35,000 STEM graduates, 24 provincial research hospitals and the more than 300 early-stage life sciences companies in the ecosystem of the MaRS Discovery District.

The JLABS space earlier this month played host to several panel discussions before nearly 50 business and government delegates from 27 countries taking part in the 6th Americas Competitiveness Exchange, an initiative of the Inter-American Competitiveness Network (RIAC) created and supported by the US Department of Commerce, the US State Department and the Organization of American States (OAS).

First up: research collaboration models at area hospitals and the University of Toronto.

"I moved to Toronto six years ago from New York City," said Michael Farkouh,a specialist in heart disease and diabetes who is chair of the Peter Munk Centre of Excellence in Multinational Clinical Trials at the University of Toronto. His mentor once told him the interdisciplinary approach was the way of the future, and he's found that future in the Toronto area. "One thing I can tell you right off the bat is there is a rich ecosystem in terms of the number of hospitals with collaboration in cardiology — a bench-to-bedside approach, with strong research programs and links to outside researchers."

Today, said Farkouh, two new therapies for treating Type 2 diabetes are coming to fruition in Toronto, where insulin was first discovered nearly 100 years ago, just a stone's throw away.

Lilian Siuis a medical oncologist at Princess Margaret Hospital and Faculty of Medicine, University of Toronto. "In the last few years, the big focus has been personalizing treatment for cancer," she said. Princess Margaret is home to a world-class program that has about 40 Phase I clinical trials ongoing at any one time. "Many are being tested for the first time in the world on patients," she said, through preferred partnerships with large and small pharmaceutical companies. "Why is Toronto a good place for this? It's a very supportive environment, with institutions like the University of Toronto. We have a good track record, and we have a large treatment catchment area. Outcomes on patients are very assured. We're surrounded by many important institutions with a lot of resources. The science in front of you is really strong." 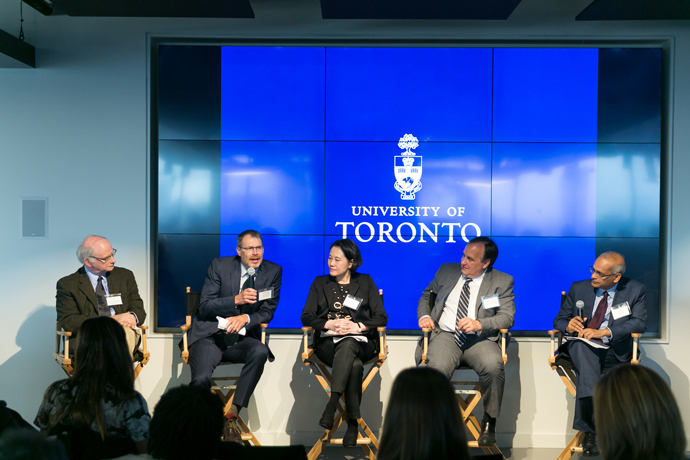 "Recent advances seem to have happened overnight, but the creation of this deep value chain cluster has happened over many years of investing," said Peter Zandstra, executive director of Medicine by Design, Faculty of Medicine, University of Toronto.
Photo courtesy of Province of Ontario

Peter St. George-Hyslop, director of the Tanz Centre for Research in Neurodegeneration Disease, University of Toronto, is focused on identifying genes that cause such diseases, and his team already has identified more than 20. He praised the rich academic environment and roster of molecular geneticists "who allowed us to get ahead of luminaries like Craig Venter, who to this day sees me and says, 'I remember you, you beat me.' Which we did. This collage of expertise is unique to Toronto and really is catalytic."

Asked why international partners should look to Toronto, Farkouh said his team always has known they had to be a value-add, and play the role of the "little brother or sister to the north" in its partnering efforts with US organizations. "We realized from the outset that our barriers were mostly geographic, not cultural. We provided something they didn't have: a coordinated approach from bench to bedside. One of the major milestones in Toronto was starting our own CRO [contract research organization] at St. Mike's [St. Michael's Hospital, affiliated with UT]. Our cost is about half what it is to conduct a study at Harvard or UMass."

Along the say, Farkouh added, the team has acquired a reputation for certain specialties, and was just funded to study an influenza vaccination for its role in preventing heart attacks, independent of whether it treats the flu. "It's a multidisciplinary approach," Farkouh said. "We had to up the game and be a value-add. We had to provide a more efficient model, and I think our [Canadian] healthcare system with a single payer; our ability to monitor outcomes; and our ability to have support from our government for core facilities made us very attractive to our colleagues. We have a network now of 10 major hubs in the world in cardiovascular medicine, including Mayo, Harvard, Sao Paulo, India and China. Not every paper is going to be a Toronto first, but we'll provide the cost-effective infrastructure to conduct these trials."

St. George-Hyslop said potential collaborators can find any specialists they want, and an identified cohort of patients to go along with them. They also find cutting-edge instrumentation and technical capabilities. "Another thing just as crucial is the mindset of Canadian and Toronto investigators, which really is collaborative," he observed. "We have been early contributors to large data sets. There is an ability to think beyond what is just good for me, to how we can work together. There is some generosity among us. We're prepared to share not only our reagents, but the credit." 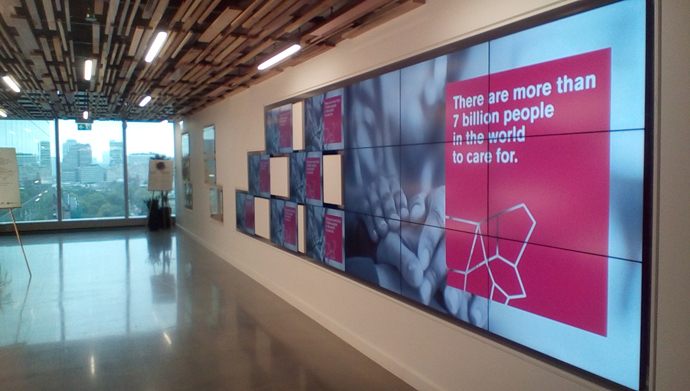 Open for only eight months, JLABS@Toronto already has 25 companies in residence, the fastest takeup of any JLABS site.

"The key opportunity at the interface between engineering and medicine is that medicine is become increasingly more quantitative, and engineering is becoming more biological," added Peter Zandstra, executive director of Medicine by Design, Faculty of Medicine, University of Toronto. "Recent advances seem to have happened overnight, but the creation of this deep value chain cluster has happened over many years of investing."

That started with the discovery of stem cells in Toronto by Drs. James Till and Ernest McCulloch in the 1960s, and has continued through to the federal and provincial funding of the Centre for Commercialization of Regenerative Medicine (CCRM). "It creates an opportunity where we can start focusing on specific problems," Zandstra said. "One is advanced manufacturing of cellular therapeutic products. In this very building, in collaboration with GE Healthcare, we are building a center focused on that, where advanced products can be tested in clinical trials."

In the next panel, Jennifer Moody, vice president commercialization at CCRM, said the relationship with GE had blossomed within the past year, as "like-minded individuals within CCRM and GE Healthcare came together to discuss bottlenecks in the cell therapy space, particularly around cell manufacturing. The game plan ended up being a $40-million initiative with support from the government and GE, and it will be on the 10th floor of this building by the end of the year."

Rebecca Yu, head of JLABS@Toronto for Johnson & Johnson Innovation, said the Toronto site, which just opened eight months ago, already has 25 companies in residence, among 140 across all the JLAB sites. "It's been the fastest uptake of any JLABS," she said.

Bill Charnetski, the Province of Ontario's first-ever chief health innovation strategist, came to the new post after 10 years at AstraZeneca. He said his office was created out of the desire to bring together a progressive healthcare system with the universe of some 1,000 healthcare startups in Ontario. 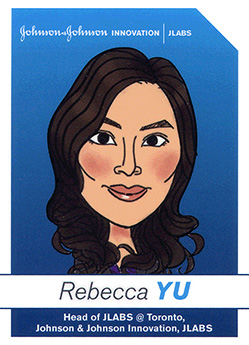 "I think this space, in my opinion, could be the next Boston," says Rebecca Yu, head of JLABS@Toronto for Johnson & Johnson Innovation.

"The bad news is that there are competitors," said Charnetski. "The good news is we have a lot of strengths on our side. The city is now the fourth-largest market in North America. It's a single-payer system, and so diverse you could replicate any other population in the world. That bodes well for us, but the government has to get out of its own way. Our healthcare system is single-tier public funded. The challenge is that governments aren't noted for their ability to run highly efficient high-performing businesses.

"We are in an imperfect situation, with a single-payer system that faces stresses, no question," he continued. "But here's what government can do — government can do things really well when it lines itself up with a strategy, the right people and processes. What can we do to not just inject innovation into the conversation, but encourage people to do more together so that the whole is greater than the sum of its parts?"

All the indicators point to that question being answered in Toronto's Discovery District, with the pulses of that innovation reverberating throughout the province, across Canada and beyond.

J&J itself decided to come to Toronto with their JLABS concept after a visit by the company's chief scientific officer, who saw all the hospitals and experienced their brand of open-source collaboration. "At the first break, he said, 'We need to put people here,' Yu said. "It was a long two years, but we brought it here. I think this space, in my opinion, could be the next Boston."