A new CBRE report on 'Eds & Meds' shows the ultimate economic vital sign may be stability itself. 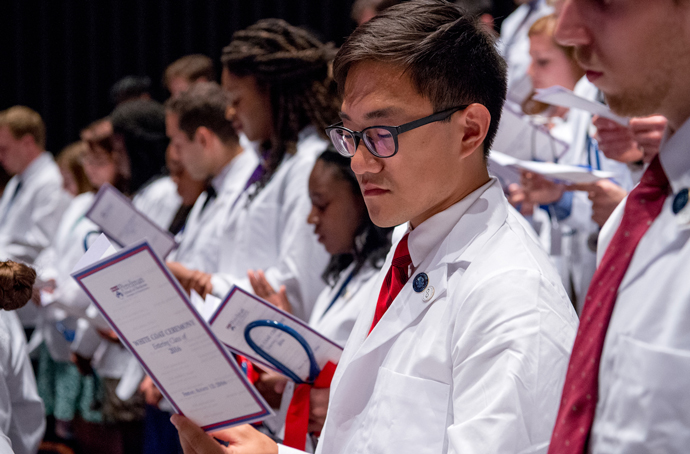 Sometimes the Ed and the Med are one and the same: Penn Medicine's history of patient care began more than two centuries ago with the founding of the nation’s first hospital, Pennsylvania Hospital, in 1751 and the nation's first medical school at the University of Pennsylvania in 1765. The university's Perelman School of Medicine in March was ranked among the top five medical schools in the United States for the 20th year in a row.
Photo courtesy of Penn Medicine
by ADAM BRUNS

A new CBRE report indicates that cities with higher concentrations of education and medical jobs can navigate hard times a lot more easily when it comes to fluctuating retail and apartment rents.

Such areas as Philadelphia, Pittsburgh, St. Louis, New York and Baltimore showed some of the smallest rent declines during the Great Recession.

“The secular expansion of the Eds-&-Meds industry is impressive, from an increasing presence in downtown office towers and suburban shopping centers to multifamily units occupied by doctors and researchers,” said Ian Anderson, CBRE Director of Research and Analysis in Philadelphia, and a co-author of The Eds & Meds Cure for Market Volatility along with Spencer Levy, CBRE's Americas head of research. “Not only does this sector provide a source of growth, but it also delivers a notable degree of stability to commercial real estate properties and markets.”

Among the chosen symbols of Eds & Meds' power? The iconic US Steel Tower skyscraper in Pittsburgh, the tallest building in the city when it was completed in 1971, saw the logo of University of Pittsburgh Medical Center raised to its crown in 2008.

Behind the symbols are statistics and facts like this astonishing observation: The Eds and Meds sector has not declined once in employment on an annual basis going back to 1940, and in the past 50 years has grown its job total by 500 percent and added 18.8 million jobs (more than any other "sector").

When ranked by percentage of total employment in Eds & Meds, Philadelphia (21 percent), Boston and Pittsburgh ranked first through third among the 25 largest US MSAs by employment (2016 numbers), followed by New York-Newark, Baltimore and St. Louis (just ahead of Minneapolis-St. Paul and L.A.) Then again, even the bottom-dwellers in this quasi-ranking can boast some pretty major institutional heft (and may be happier it isn't so heavy with impact): Charlotte is just about 10 percent in 25th, preceded by DFW, Atlanta, Orlando, Denver and Houston.

Anderson and Levy posit that multifamily and retail benefit the most from Eds and Meds, due to the demand from workers for rental apartments and consumer purchases. But they go one step further and say the presence of eds and meds calms the waters in terms of lowered volatility in multifamily and retail rents and vacancy. In other words, there aren't usually big employment shocks in healthcare, education and social services institutions. By way of example: The top six cities averaged a 5.6-percent drop in apartment rents and 8.8-percent drop in retail rents during the Great Recession, while the bottom six averaged 10.1-percent and 16. 1-percent drops, respectively.

Or, as one analyst put it, eds & meds means more beds, filled with medical professionals, professors, students and even patients and their families.

Washington, DC, is cast as an outlier due to its overweening federal government presence. And Houston and Dallas-Fort Worth, though they rank highly by their low overall drop in employment from 2007 to 2010, are characterized as "unique" cases due to the "Texas economic miracle" — a somewhat facile rationale, given the presence of such organizations as Texas Medical Center in Houston and Baylor University Medical Center in Dallas.

The authors also say that tech-driven consolidation may squeeze out smaller education and health service providers, ultimately meaning that, "the Eds & Meds industry will cluster in certain exclusive metros, just as the technology industry has."

The Big Six will stay strong, they say. But there are a handful of cities where rising Eds & Meds growth will coincide with an increasing share of the local economy, led by Riverside, California; Minneapolis-St. Paul, L.A. and Phoenix; and Denver, San Diego and San Francisco. Cities such as Portland, Oregon; Atlanta and Charlotte will see high job growth in the sectors, but it won't coincide with a growing share of the regional economy, say Levy and Anderson. 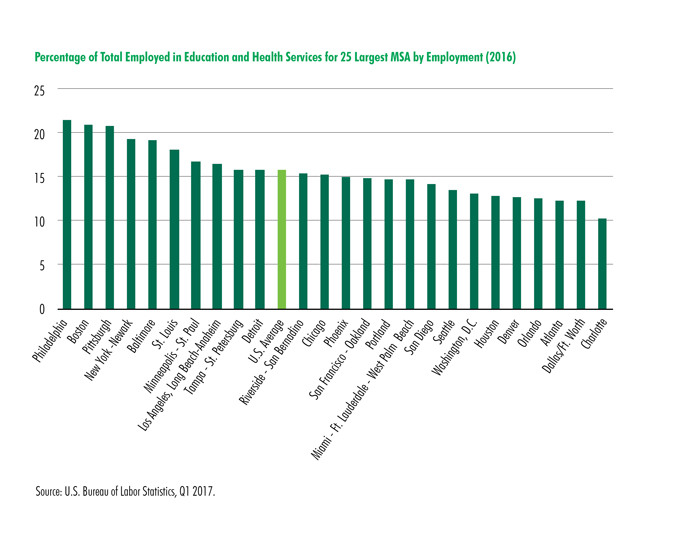 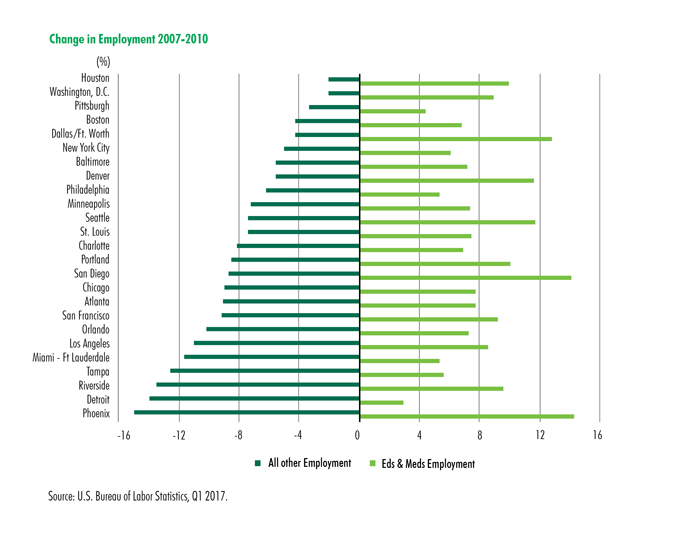