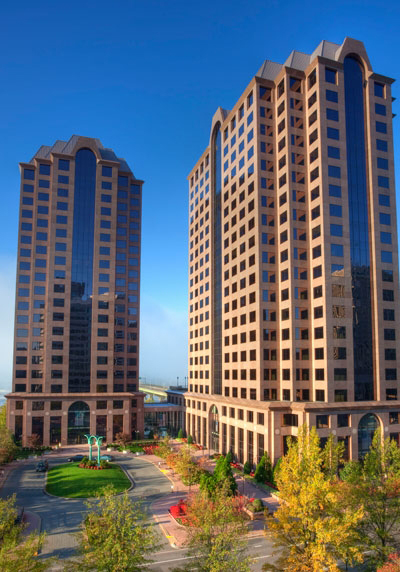 Riverfront Plaza in Richmond, originally built in 1990, will be the home of Owens & Minor's new Client Engagement Center, in the same community where the company got its start 135 years ago.
Photo courtesy of Hertz Investment Group

A global medical products distributor and healthcare services provider chooses to grow where it was first planted 135 years ago.

After considering 60 communities, leaders of healthcare services company Owens & Minor in February chose to locate a new Client Engagement Center in the same city where, in 1882, it opened its first storefront drug company, when opiates took the form of “Mrs. Winslow's Soothing Syrup” (for teething babies) and “McMunn's Elixir of Opium” (for nervousness).

The 300 new jobs being created for the 500-employee center will soothe the nerves of community leaders in a city on a major upswing: Since September both employment and the labor force have grown by more than 3,000 people. Last October, Washington, D.C.–based CoStar Group announced it would open a new 732-job research center in the city. And on March 17, the city not only retained its AA+ credit rating from Fitch, but also was named one of the South's Best Cities of 2017 by Southern Living.

“Virginia has been the home of Owens & Minor for 135 years, and we are very pleased to expand our presence in Richmond with this new initiative," said Cody Phipps, president & CEO of Owens & Minor. "This project will support our plan to build the most efficient and intelligent route to market for healthcare products and supplies. The downtown Client Engagement Center will support standardization and enhanced service to our nationwide customers, who are asking for our assistance in adapting to a changing healthcare market. The CEC will provide a scalable platform for future growth, as well as higher levels of service to our customers. We thank the City of Richmond and the Commonwealth for their help in bringing this initiative to life.”

According to a release, the Virginia Economic Development Partnership worked with the City of Richmond and the Greater Richmond Partnership to secure the project for the Commonwealth. Governor Terry McAuliffe approved a $1.5-million grant from the Commonwealth’s Opportunity Fund to assist the City with the project. The company is eligible to receive state benefits from the Virginia Enterprise Zone Program, administered by the Virginia Department of Housing and Community Development. Funding and services to support the company’s employee training activities will be provided through the Virginia Jobs Investment Program.

“This announcement is an outstanding example of our continuing work building a new Virginia economy,” said Governor McAuliffe at the event. “Stimulating growth in economic sectors that are not as reliant on federal spending helps diversify our economy and offset the impacts of defense cuts and sequestration. I thank Owens & Minor for its continued presence in Hanover County and the Williamsburg area, and congratulate the company on its decision to grow here in Richmond.”

"We welcome this industry leader to the city with open arms and look forward to the vitality they will bring to the downtown community,” said Mayor Levar M. Stoney. “Their decision is a testimony to their confidence in the quality of our local workforce and commitment to the region. The City’s Office of Community Wealth Building and Workforce Development will be working closely with Owens & Minor to develop training programs for the new jobs created by the company.”

"I really enjoy forgetting," the narrator of the 1986 film True Stories, played by Talking Heads lead singer David Byrne, told us. "When I first come to a place, I notice all the little details. I notice the way the sky looks. The color of white paper. The way people walk. Doorknobs. Everything. Then I get used to the place and I don't notice those things anymore. So only by forgetting can I see the place again as it really is."

“It was important for the site selectors and company representatives to see Richmond with a fresh pair of eyes,” said Bethany Miller, vice president of business development at the Greater Richmond Partnership. “We encouraged them to tour the region and meet with companies, as they had with competitor locations, and to explore how the region has progressed. Looking at things from a new perspective really made a difference.”

The multimillion-dollar investment includes the lease of 90,000 sq. ft. at Riverfront Plaza.  According to the Greater Richmond Partnership, the region successfully competed against Nashville, Tennessee, and Salt Lake City, Utah, for the project.

"In May 2016, the Partnership was contacted directly by Jason Hickey and Jason Rancadore of Hickey & Associates, a site selection firm with offices throughout the world, with an opportunity to compete for 'Project Engage,' " explained a Partnership release. "Hickey described Engage as a high-touch customer service operation related to the healthcare industry which was considering 60 locations. After working the project, it became clear that it was Owens & Minor, a Fortune 500 firm headquartered in Hanover, Virginia.

"In the site location process, the Partnership encouraged the project managers to evaluate the region with the same metrics and high standards as competitor cities," said the release. In other words: Don't do us any favors. But give us a fair shot.

“Four years ago the Partnership created a Site Location Consultants program with the goal of strengthening our relationships with these important gatekeepers,” said Barry Matherly, president and CEO of the Partnership. “Over the last year, more than $80 million in capital investment and 500 jobs have been brought to us from consultants, proving that these valuable relationships are paying off.”

David Wilkins, Trib Sutton and Matt Anderson of CBRE Richmond negotiated the lease for Riverfront Plaza’s landlord, Hertz Investment Group, a California-based firm that purchased the two towers in late 2015 from Hines for $147.5 million. Hines had acquired Riverfront Plaza, which originally opened in 1990, in 2006.

Mapping Out the Strategy

According to the company's investor day presentation in New York in March, the company's profile now encompasses $9.7 billion in revenue that comes from 7,900 employees working across a global portfolio of 68 distribution facilities — 44 domestic and 24 across 12 European countries — as well as six proprietary locations in the US, Ireland and Asia that help manufacturers and providers by sourcing and assembling procedure kits. The company's 1,100 manufacturer partnerships and 3,000 healthcare provider facilities served add up to dealing with more than 200,000 products, and annually shipping 2.2 million procedure kits and trays and supporting 5 million medical procedures.

Much of the company's growth over the years has come via acquisition. Among the Owens & Minor distribution facility investments tracked by the Conway Projects Database over the past five years are a $5-million expansion in Grimes, Iowa, in 2015; a $1-million expansion in the Chicago-area suburb of Carol Stream in 2013; a new $8-million, 55,000-sq.-ft. facility in Cleveland, Ohio, in 2013; and California expansions in San Diego and Ontario in 2013 and 2014, respectively. The company's last tracked headquarters expansion was a $20-million investment in 2005.

Among the company's key strategies is building the most intelligent route to market, in a healthcare arena with what the company calls "staggering" inefficiencies. As a point of comparison, the presentation pointed to a 0.4-percent increase in health services productivity vs. 3.9-percent improvement in US manufacturing and 1.1 percent in US services overall. The new client engagement center is among the global platform capabilities the company is investing in to pursue this strategy in particular.

Another strategy is expanding along the continuum of care and becoming the preferred outsources for leading medical product manufacturers (an area viewed as a $50-billion market opportunity). The new engagement center will especially help the company pursue its fourth and final key strategy as well: transforming through data, analytics and services, seen as a market worth more than $10 billion.

Those lofty opportunities beckon even after a major national healthcare-provider customer that generated $525 million in revenues to Owens & Minor in 2015 chose last year not to renew its distribution agreement.

But that — just like 135 years of company history in Greater Richmond — is in the past. Or as the True Stories narrator put it: "What time is it? No time to look back." 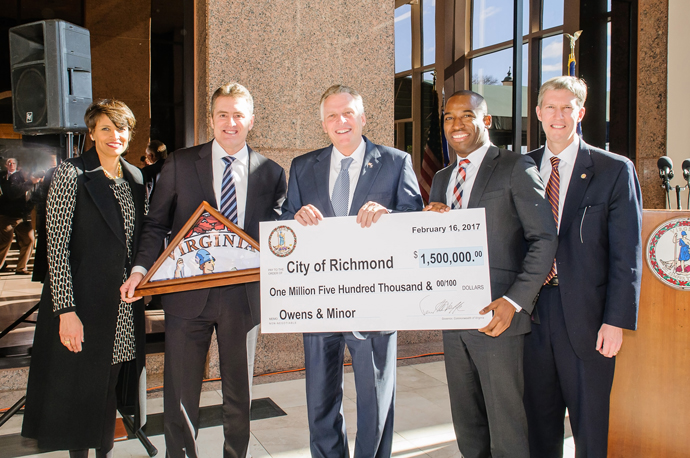