A new mega campus for ag-tech in North Carolina aims to foster solutions to world hunger and lead the way to a more urbanized Research Triangle Park. 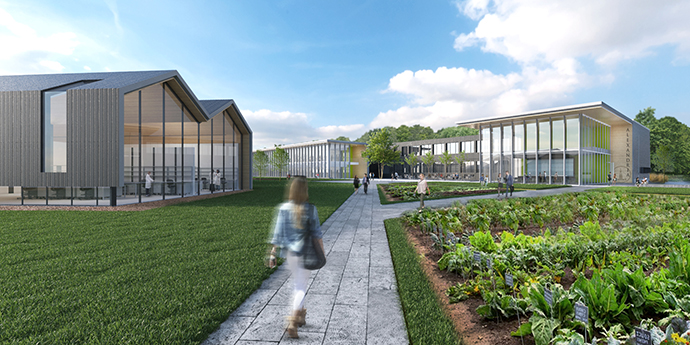 Alexandria says its AgTech – RTP campus's high-tech greenhouse and R&D facilities will enable Alexandria to fill a critical industry demand for greenhouse space, "a scarce resource not just in RTP, but also across the country."
Images courtesy of Alexandria Real Estate Equities, Inc.
by ADAM BRUNS

When Alcami, a contract development and manufacturing organization (CDMO) based in Wilmington, North Carolina, announced in July its decision to move its HQ to Durham in the state's Research Triangle Park, it was the latest in a long line of life sciences moves to RTP, attracted by the decades-long vitality one of the original US industry clusters. But Alcami wasn't alone.

Also in July, office REIT Alexandria Real Estate Equities announced the Alexandria Center for AgTech – RTP, a planned multi-tenant "mega campus" intended to attract companies and ideas focused around addressing global hunger as it impacts human health. Alexandria acquired the site, a former Syngenta complex, through an affiliate. And it just happens to be adjacent to an Alexandria site. The REIT anticipates overall development of 1 million sq. ft. on the two properties.

"Home to the largest assemblage of the world's leading industry crop protection and seed companies, renowned academic institutions, skilled talent and an expanding pool of ag-focused venture capital, RTP has been identified by Alexandria as the ideal location to develop the first multi-tenant, amenitized mega AgTech campus," said an Alexandria release. 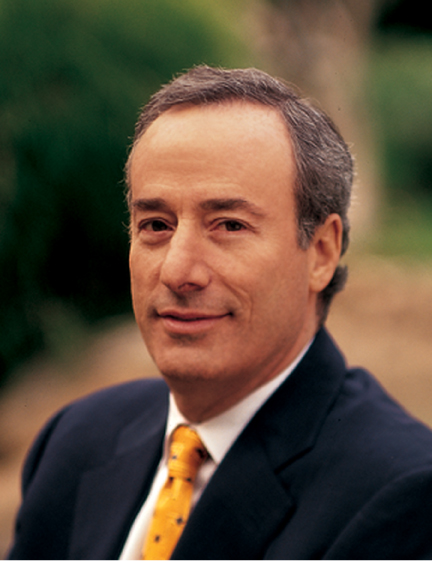 "Through our vision and development of the first multi-tenant, amenity-rich mega AgTech R&D and greenhouse campus, our strategic investment in agricultural innovation and our vanguard position of thought leadership in support of advancing the agricultural field, we are fostering the next generation of companies and technologies that are essential to the future growth of the AgTech sector," said Joel S. Marcus, chairman, CEO and founder of Alexandria Real Estate Equities, Inc. and Alexandria Venture Investments and chairman and founder of AgTech Accelerator Corporation, which happens to be one of the campus's first tenants.
Boragen, a small-molecule company pioneering next-generation novel chemistry solutions for plant and animal health, is the other.

In an interview, Marcus says his personal history in ag-tech goes back to 1985 when he represented a number of large investors (including major Japanese companies) wishing to invest in the US. The REIT's push to grow the niche in RTP began in 1998. Its tenant roster on another 1 million sq. ft. in the area includes Bayer Crop Science, Medicago (owned by Mitsubishi Tanabe Pharma), Monsanto and Novozymes, as well as Benson Hill Biosystems and Mimetics.

"Much like life sciences came in in 1978 but didn't boom until the '90s, ag-tech has begun to emerge over the last three to five years, and seems to have clustered in and around the RTP region," Marcus says.

Human health, says Marcus, is all about addressing disease on one hand and hunger on the other. Much of Alexandria's focus since its inception has been on the former, and now is the time to give world hunger the attention it needs. Marcus says Alexandria is doing so by focusing on three aspects: infrastructure such as R&D and greenhouse facilities; the cultivation of venture capital (its accelerator fund is now approaching $25 million); and coalescing industry leaders to address issues and policy — Alexandria hosted its first agriculture-focused Alexandria Summit® in February 2017.

Lynne Zydowsky, president & co-founder of the Alexandria Summit and chief science advisor to Marcus, says the goal is to have the event attain Davos-like status in the field. The inaugural event included CEOs discussing mergers, translation of innovation from universities to commercial products, and emerging sources of finance. That last topic is especially important, given that ag-tech doesn't have the same federal government ballast as health care gets from the NIH's $30 billion.

"There are some sources from the DOE or USDA, but no entity of that magnitude," she says.

"That's why we launched the accelerator," adds Marcus, whose investors include Syngenta and its new Chinese parent firm ChemChina. Asked if pursuing Chinese capital more broadly is part of Alexandria's strategy, he says, "There is plenty of capital here in the US. It just needs to be organized."

The summit also included diverse, sometimes opposing voices. So how do you develop an umbrella campus that can encompass GMO companies as well as biodynamic and organic ag companies whose aims are directly opposed to GMO?

"If you're trying to feed 5 or 6 billion people over the next decade or two and eventually 9 billion," says Marcus, the angst about GMO is really misplaced, "because virtually every drug that's come out of biotechnology is genetically driven. Somehow people think there's some Frankenstein sense to it, but it's foolish — you'd never feed this planet without these tools and techniques. Some of the most important innovations will transform genes of people and plants. You cannot have organic food to feed the planet. It just will not work."

Alexandria's known for its successful life sciences campuses at Mission Bay, California (2004); New York City (2005) and Cambridge, Massachusetts (2006). Marcus sees RTP as the next trophy campus in its portfolio, only with a different focus. He also sees the proverbial town-vs.-country dichotomy coming to an end, as the suburban office campus with siloed operations, long roads and acres of grand landscaping dies out.

Asked where else he'd see as strong candidates for ag-tech campuses, he says, "I think you'll see us expanding in the San Francisco Bay area. There is dense venture capital there, and a great array of engineering capability there. You'll see us foster additional ag innovation in the Bay area, and we've already started to seed that opportunity. The driving force is urbanization, collaboration, innovation — being together in a dense location" that has been fully amenitized. "Hopefully the [Research] Triangle, beyond what we're doing, will recognize they need to step into the 21st century and urbanize the park." 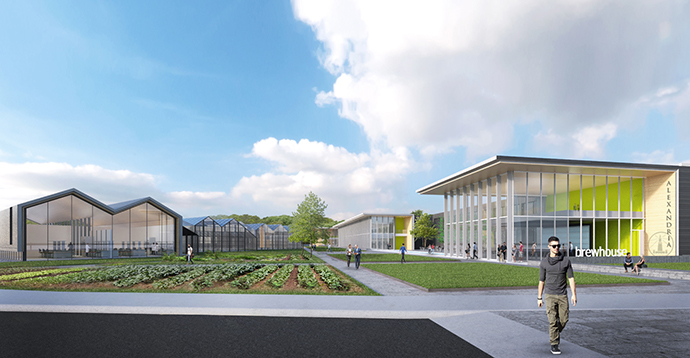 Alexandria Chairman, CEO and Founder Joel Marcus says the age of the siloed, expansive suburban office campus is over, and hopes to see further moves to urbanize RTP going forward.