Merck (MSD, the one based in New Jersey) in late November announced it would open a new “UK Discovery Centre” in London in 2020 that will eventually be home to around 950 employees — 800 from the company’s UK HQ in Hoddesdon and 150 new research positions. The firm is evaluating several potential sites in the London region.

“We believe London to be a unique bioscience center of excellence and a key component of the established golden triangle for academic science of London-Oxford-Cambridge,” said Louise Houson, managing director, MSD in the UK and Ireland. “This investment presents a major opportunity for us to work in collaboration with the UK Government to build on the forward thinking and ambitious Industrial Strategy White Paper published by the Government today.”

Medical supplies manufacturer and distributor Medline in early December announced it is nearly tripling its footprint in Maryland with the construction of a 1.1-million-sq.-ft. distribution center in the Principio Business Park in Perryville. The new distribution center, which will replace the company’s current Havre de Grace facility, will be LEED-certified and is expected to create more than 200 new jobs over the next six years, which, when combined with their current workforce, will provide jobs for more than 300 local residents. The site is one of more than 40 distribution centers in the US. Site Selection talked with Medline Vice President of Real Estate Dmitry Dukhan for this Q&A published in the magazine's November issue.

Hollister Incorporated, the Illinois-based global medical device manufacturer known for its ostomy-care and continence-care products, in November began construction on a manufacturing plant in the Kaunas FEZ (Free Economic Zone) region of Lithuania. The multi-stage project represents a company investment of over $58 million (€50 million) and is expected to create more than 300 jobs over the next several years. "Very early in the site selection process, our team realized that the Kaunas region of Lithuania offered an ideal European location, a welcoming business environment, strong community support, and an ideal combination of infrastructure and talent to meet our manufacturing needs," said Hollister President and CEO George Maliekel. Company officials declined to be interviewed about the site selection process.

The company noted the critical skills and cultural fit of the region with its aims, and noted its plans to work with Kaunas University of Technology and the Lithuanian University of Health Sciences, among others, to keep that talent pipeline filled. The first few engineers hired from Lithuania will work at the company’s plant in Ballina, Ireland, plant until the first phase of construction in Kaunas is complete in 2019.

“CDI @ TMC represents unprecedented collaboration between the scientists, business leaders, academicians and investors required to bring revolutionary medical devices from concept to market,” said Johnson & Johnson Group Worldwide Chair Sandi Peterson. “With all these resources in one zip code, medical devices may be developed, tested, moved to clinical trials and regulatory approval, then provided to the doctors and patients around the world who need them faster than ever before.”

“We are excited to build upon our collaboration with the Johnson & Johnson Family of Companies through the launch of the,” said William F. McKeon, President and CEO, Texas Medical Center. “We have already experienced tremendous growth within our ecosystem, and we believe that the CDI @ TMC will serve as a cornerstone for medical device invention and commercialization, further advancing our leadership in life sciences.” 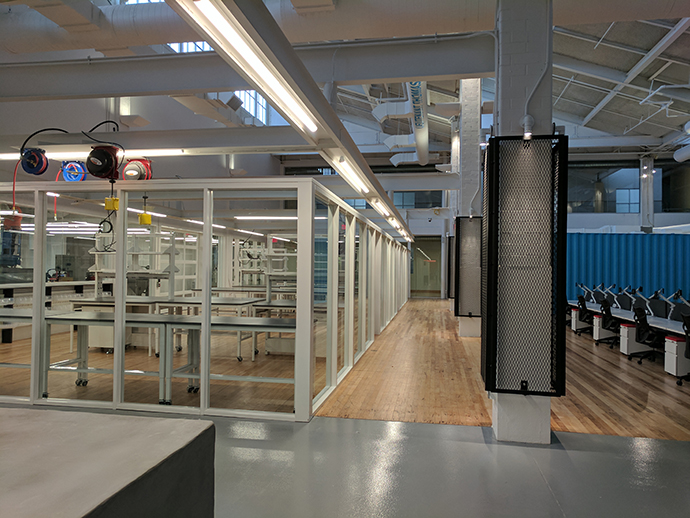 Described as an “engineering studio,” the new Center for Device Innovation at the Texas Medical Center is appointed with all the tools its staff may need to translate ideas to products, including a machine shop, a mechanical testing lab, an electronics workspace and compontent lab, a 3D printing lab and a virtual reality demonstration area.
Photo courtesy of J&J

If you haven't already seen or read the investigative story by 60 Minutes and the Washington Post about a DEA investigation of McKesson Corp. involving opioid distribution practices at some of its 30 warehouses, you might want to do so now.

The new University of Buffalo medical school and integrated transit station has opened in the mixed-use Buffalo Niagara Medical Campus downtown. Designed by HOK, the new medical school building features three research floors sandwiched between public areas on the lower floors and the more specialized, pedagogical components on the upper floors; and a common atrium with multiple collaboration areas. 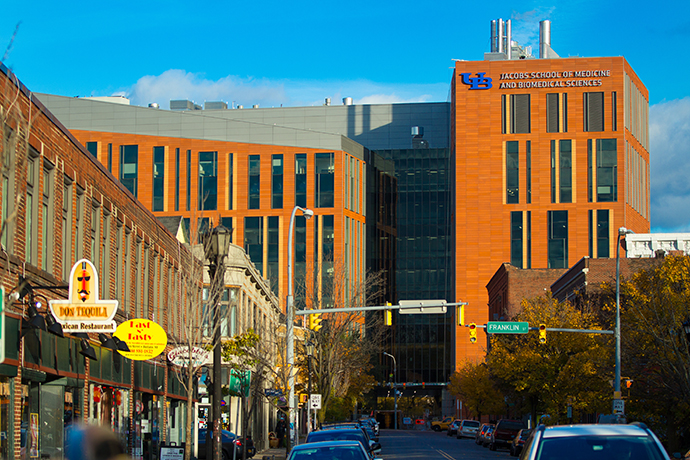 SCA Pharmaceuticals, which provides sterile admixtures and prefilled syringes to hospitals and surgery centers, opened its 90,000-sq.-ft. manufacturing facility in Windsor, Connecticut, on November 27, the same date that four years ago saw the signing of the FDA’S Drug Quality and Security Act into law. Section 503B of the law defines an “outsourcing facility” as a facility at one geographic location or address that is engaged in the compounding of sterile drugs, which under the law can qualify for exemptions from the FDA approval requirements and the requirement to label products with adequate directions for use, but not from current good manufacturing practice (cGMP) requirements.

SCA partners with hospitals as an extension of their own pharmacy, and also operates a location in Little Rock, Arkansas. The company employs more than 360 employees with over 140 in Connecticut. As the Windsor facility expands over the next three years as it serves East Coast clients, SCA plans to add over 200 additional full-time positions. 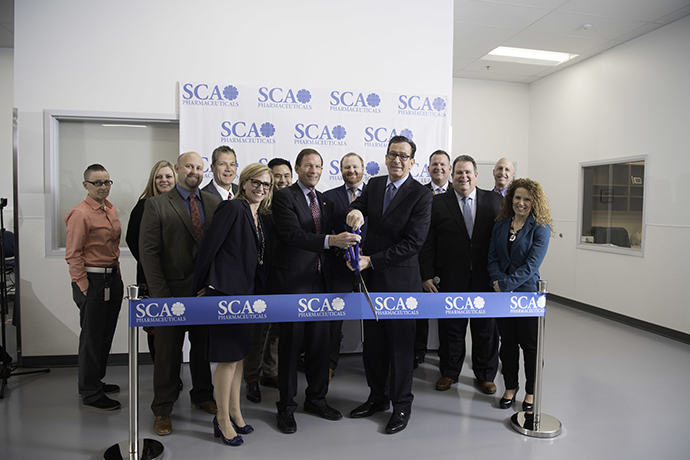 Another player in the pre-filled drug delivery system space is Vetter, whose growth in Chicago was documented by Site Selection last year. In November, the company officially opened its new branch office in the biologics cluster of the Songdo district in South Korea. The company established its APAC hub in Singapore in 2014, and subsequently formed a Japanese subsidiary by opening an office in Tokyo in 2015. 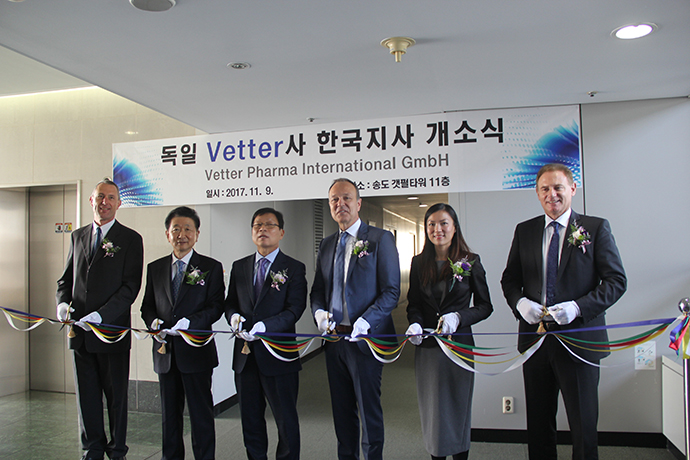 California’s Varian Medical Systems in November opened a new facility in Jundiaí, Brazil. The 50,600-sq.-ft. facility in Multivias Industrial Park will serve as Varian’s education and training HQ for Latin America, and currently features a demonstration room, two training classrooms and a fully-equipped Varian Trilogy® linear accelerator. In 2018 the manufacturing and warehousing areas of the facility will become operational.

"We are excited that this facility is now open and demonstrates our long-standing commitment and partnership with the Brazilian Ministry of Health in the fight against cancer and increase the access to advanced radiotherapy treatment in the country and across Latin America," said Humberto Izidoro, Varian Medical Systems' managing director in Brazil. "In the first year, we estimate that we will train up to 300 clinicians and therapists on the use of radiotherapy equipment, treatment plans and techniques."

Japan-based Terumo’s subsidiary MicroVention this fall opened a new innovation center at the Summit Office Campus in Aliso Viejo, California, returning to the city where it was founded 20 years ago. Site Selection documented the location decision when groundbreaking occurred in summer 2015.

The 205,000-sq.-ft. complex, which can accommodate more than 800 associates, consolidates the majority of MicroVention operations and functions, with manufacturing continuing in Tustin, California. MicroVention, which develops and markets medical devices that enable or significantly improve treatment of cerebrovascular diseases, was acquired by Terumo in 2006.