Two new rankings assess US states by overall well-being and by healthcare system flexibility. See where they overlap, and where they don't. 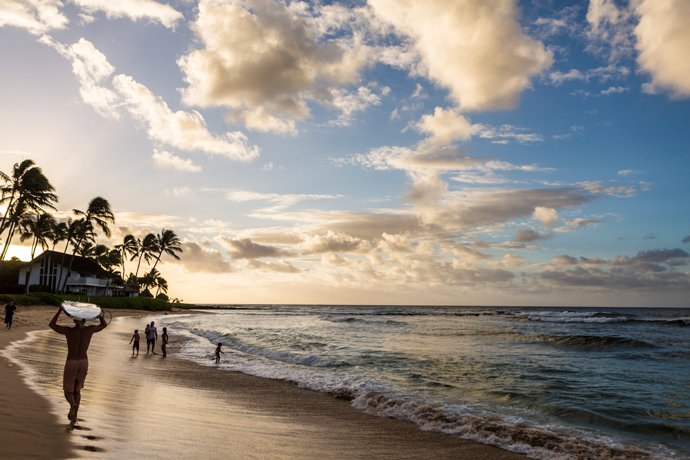 Walking this beach on Kauai in the No. 1 Well-Being state of Hawaii would make anybody's well-being skyrocket.
Photo by Tor Johnson courtesy of Hawaii Tourism Authority (HTA)
by ADAM BRUNS
"Feelin' good, feelin' good/All the money in the world spent on feelin' good."
— Ry Cooder, Fool for a Cigarette/Feelin' Good, Paradise and Lunch, 1974

Every summer, Site Selection's annual Sustainability Rankings index a number of factors to arrive at a comprehensive look at the most sustainable nations, cities and US states. One of those factors for the United States is the Gallup/Healthways Well-Being rankings, whose 2017 edition was just released today.

First, the good news: Well-being in general is at a record high. In 2016, the national Well-Being Index score reached 62.1, showing statistically significant gains from 2014 and 2015. "Also in 2016, Americans’ life evaluation reached its highest point since 2008, when Gallup and Healthways began measurement," says the report. "Now 55.4 percent of American adults are 'thriving,' compared to 48.9 percent in 2008."

"All national well-being trends are not positive, however," says the report. "Chronic diseases such as obesity (28.4 percent), diabetes (11.6 percent), and depression (17.8 percent) are now at their highest points since 2008. The percentage of Americans who report eating healthy all day during the previous day is also at a nine-year low."

But wait: You don't care about Americans in general. You want to know how your home territory ranks, and if that ranking squares with how you feel right now. 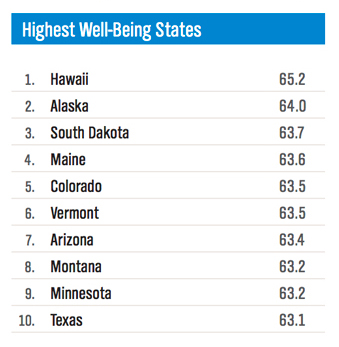 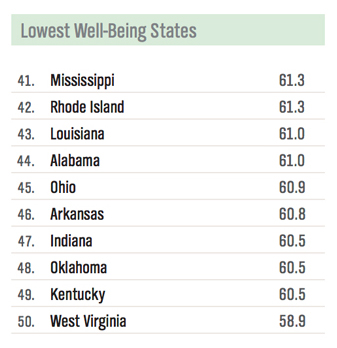 By the report's five standards of well-being (purpose, social, financial, community and physical), people are feeling their best in Hawaii, Alaska and South Dakota — two of which, coincidentally, were ranked No. 1 and No. 2 in the recently published American Dream Composite Index appearing in the January issue of Site Selection.

"As in prior years, well-being follows a regional pattern," says Gallup in a release. "Outside of Hawaii and Alaska, the states with the highest well-being are located in the Northern Plains and the Mountain West, in addition to pockets of the Northeast and Southwest. The states with the lowest well-being are found in the South and the industrial Midwest." Trend-buckers include Florida, which defies the South's low-ranking trend by coming in No. 12, and Nevada, which defies the West's high-ranking trend by ranking No. 33. 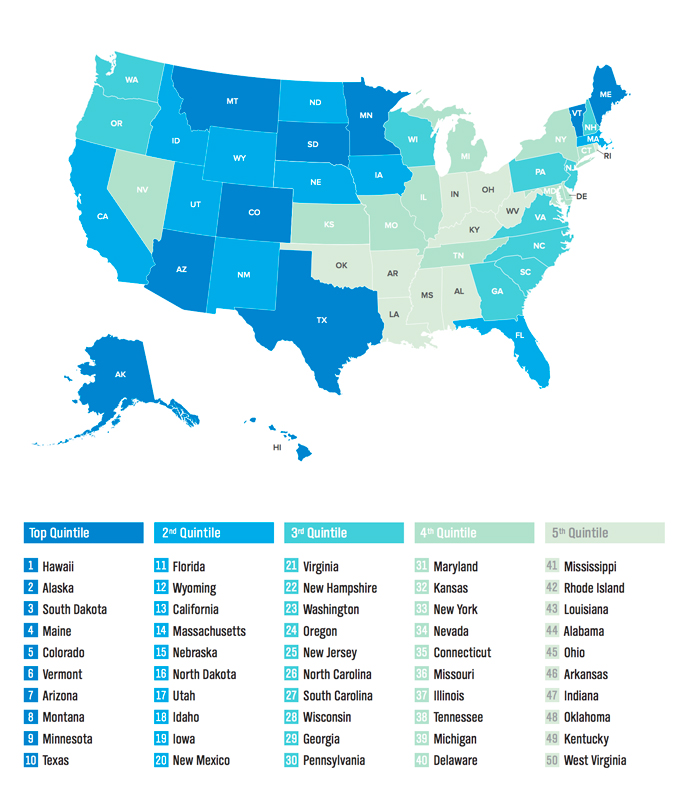 Gallup saluted Hawaii, Alaska, South Dakota, Colorado, Montana and Minnesota for setting a consistent leadership standard when it comes to well-being, and pointed to the Blue Zones Project Initiatives launched in California, Oregon, Iowa, Texas, Florida and Hawaii as models for improving your state's ranking — and thus improving your state's health at the same time. The Blue Zones Project includes such measures as working with restaurants and grocery stores to make it easier for residents to select healthy choices. 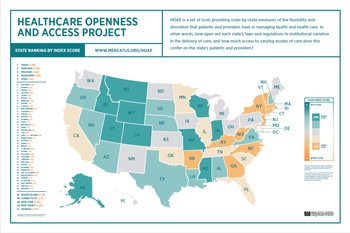 Click on this image to view a full-scale map showing how every US state ranks for healthcare openness and access.
Image courtesy of Mercatus Center

That word — access — figures prominently in another major ranking having to do with well-being: the Healthcare Openness and Access Project (HOAP) produced by the Mercatus Center at George Mason University. HOAP is a toolkit that allows each state to compare its laws, regulations, and markets with those of other states. "It is intended to spur conversation on what works — and what doesn’t work — as the country moves to improve Americans’ healthcare quality, options, and access," said a release announcing the toolkit's launch.

Rankings are based on 10 sub-indexes:

Mercatus Center Senior Research Fellow Robert Graboves noted the main impetus behind the project, which ranks all 50 states and the District of Columbia: "States control the most intimate aspects of health care and can alter them without seeking federal government approval," he said. "The actions that states take in these areas have an enormous effect on the cost and quality of health care."

Click here to view the interactive map and breakdowns of each state, and here to read the related op-ed.