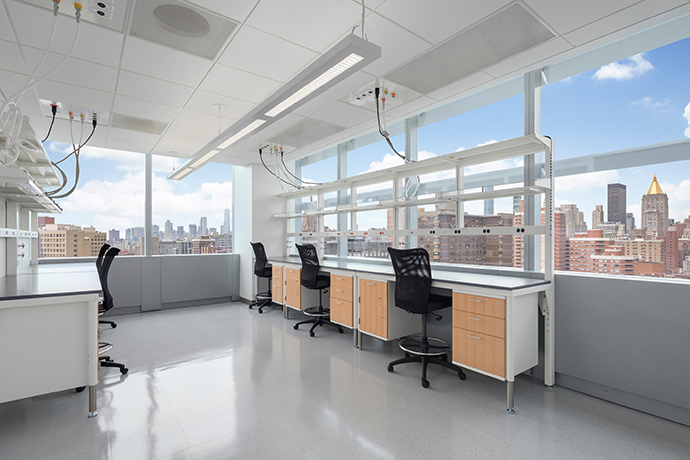 Alexandria LaunchLabs, located on the 14th floor of the West Tower (430 East 29th Street) at the Alexandria Center for Life Science in New York, opened its doors to its first 13 member companies on June 1.
by ADAM BRUNS 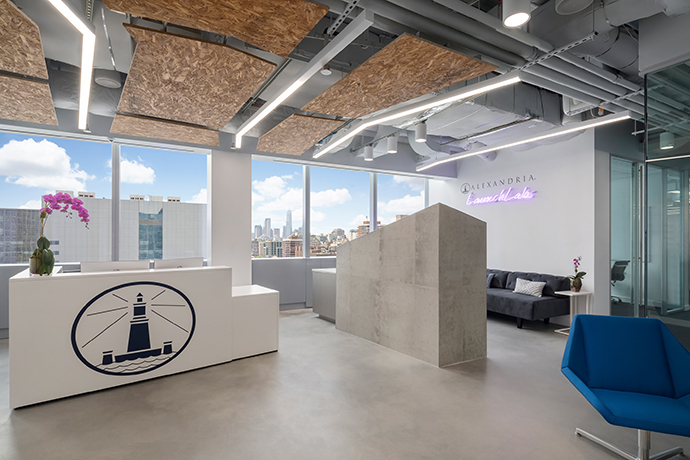 As the 2016 Life Sciences Outlook from JLL reported in December, the Big Apple's life sciences cluster is growing rapidly: Some 3.6 million sq. ft. of Class A lab space was under construction, and Cornell University's 2.1-million-sq.-ft. applied sciences campus will be delivered this year.

The latest life sciences workspace from Alexandria Real Estate Equities was delivered this week, as the REIT's new startup platform LaunchLabs held its grand opening at Alexandria Center for Life Science – New York City. The occasion was punctuated by the awarding of the inaugural Alexandria LaunchLabs $100,000 Entrepreneurship Prize to Neochromosome, a company that Alexandria in-house scientist Jenna Foger said has “the ability to change the face of science.”

According to an Alexandria release, the idea of LaunchLabs is "to satisfy key unmet needs for turn-key office/laboratory space and access to strategic risk capital for seed-stage life science companies, many of which have spun out of NYC’s academic medical institutions."

To date, 13 initial member companies have been accepted to Alexandria LaunchLabs from a competitive pool of over 115 applicants. They represent intellectual property from as close as Cornell, Columbia and NYU, and as far away as University of Maryland, Oklahoma, Ohio, Vienna and Paris:

“Alexandria is proudly committed to providing dedicated startup space as well as significant human and strategic risk capital to ensure the continued growth and success of the NYC life science cluster,” said Foger, senior principal of science and technology of Alexandria Real Estate Equities, Inc. and Alexandria Venture Investments. “Through Alexandria LaunchLabs and our Seed Capital Platform, we will help catalyze the next generation of life science companies in NYC to develop biomedical breakthroughs that will treat and cure so many otherwise life-threatening diseases.”

The JLL report ranked New York City's cluster No. 11 in the US, just behind New Jersey and just ahead of Minneapolis, Denver and Chicago. The NYC submarket saw nearly 20-percent growth in year-over-year lab rents, and attracted 6.1 percent of VC funding among the 16 clusters JLL ranked (including No. 9 Westchester County just to the north, and No. 16 Long Island).

The life sciences sector in New York City has seen 16 percent growth in jobs since 2009.

The 2017 Global Startup Ecosystems report published by Startup Genome and the Global Entrepreneurs Network ranked New York second in the world, based largely on its financial and technology clusters and its attractiveness as a launch pad for entering the US market. Though the report hardly mentioned the city's life sciences cluster, Flight VC Partner Lou Kerner told the report's authors that the creation of CornellTech will increase the supply of engineers in an area where they're hard to come by and, therefore, high-priced. According to the report, New York City is the second largest ecosystem in the world by number of startups, with about 6,300-7,800 startups. (Watch for further coverage of global startup ecosystems in the July issue of Site Selection.)

The City of New York Early-Stage Life Sciences Funding Initiative, backed by a public-private partnership, is expected to back the creation of 2,000 life sciences jobs over the next few years. In May, New York City Economic Development Corporation (NYCEDC) announced the official formation of the Mayor’s Life Sciences Advisory Council, a group of experts from academia, commercial R&D, finance, and philanthropy that will provide guidance and secure strategic partnerships as the city executes on LifeSci NYC, a $500-million initiative (see chart) to create an estimated 16,000 good-paying jobs and establish New York City as a global leader in life sciences research and development.

“New York City has always been a premier location for breakthrough scientific ideas and access to visionaries willing to invest in them,” said Dr. Bader. “Alexandria LaunchLabs fills a crucial need for lab space at the intersection of high tech and biotech." 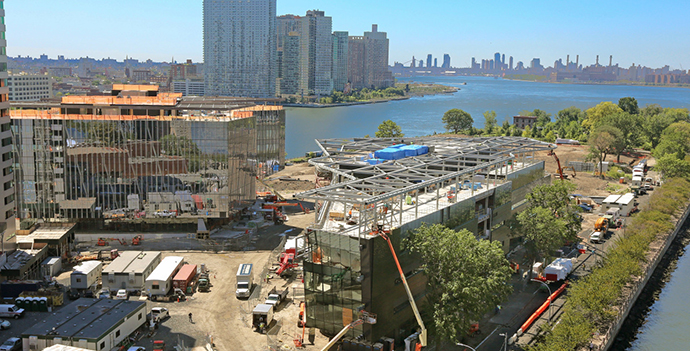 This view of Bloomberg Center at the new Cornell University applied sciences campus on Roosevelt Island was taken from the Queensboro Bridge in August 2016. The campus's first phase will be delivered this year. 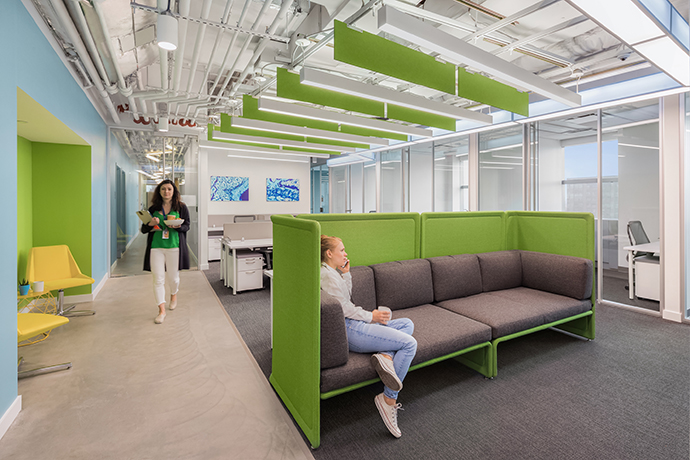 In addition to a full complement of shared equipment, LaunchLabs offers on-site lab training and access to Alexandria personnel with C-14 lab safety certification, as well as amenities such as a lounge and cafe, and shuttles to Penn Station.