The medical distribution giant’s global HQ will leave the Bay Area for the DFW suburb of Irving. 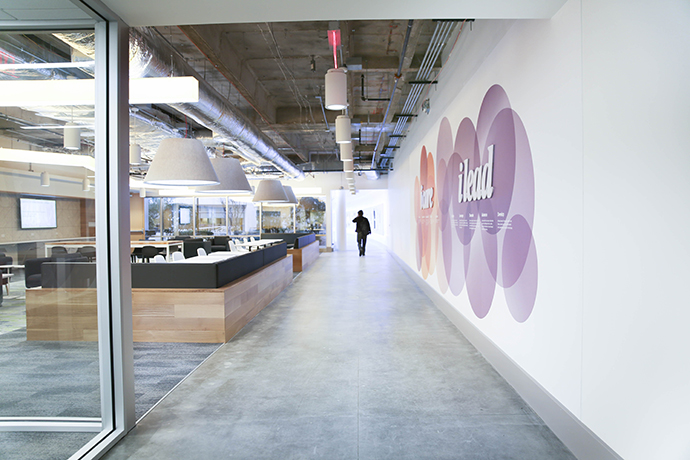 Since opening in 2016, McKesson’s regional office in Las Colinas already has been executing many functions associated with a headquarters.
Photo courtesy of McKesson
by ADAM BRUNS

From a small seed a mighty trunk may grow. If you don't believe the words of the Greek tragedian Aeschylus, then just ask leaders in any community where a small company presence blossomed into something bigger … and decidedly non-tragic.

Two years ago, McKesson Corporation, a Fortune 6 company founded in 1833 that employs more than 78,000 worldwide, decided to locate a regional operation in Las Colinas, Texas, part of the Irving-Las Colinas area in Greater Dallas. A week ago, that admittedly already large seed turned into an entire crop-filled field, as McKesson announced it was moving its global headquarters there from San Francisco, effective April 1, 2019 (no fooling).

"Governor [Greg] Abbott and the Irving/Las Colinas community have provided tremendous support since we opened our Las Colinas campus last April," said John H. Hammergren, the McKesson chairman and CEO who soon will step down from the position. (Indeed, Abbott has told Site Selection about the significance of the project.) "Making this move will improve efficiency, collaboration and cost-competitiveness, while providing an exceptional work environment for our employees."

Staff at the Las Colinas site already perform vital functions for the company in areas such as operations, information technology, finance and accounting, marketing and sales, administration and support, purchasing, and project management. Moreover, the campus has achieved sustainability goals as a LEED-Gold site and has earned a WELL Building Silver certification, the first building standard focused solely on human health and wellness.

A similar healthy and sustainable workplace vibe can be found at the headquarters of McKesson affiliate McKesson Medical-Surgical, whose new site in Richmond, Virginia, opened a month ago. 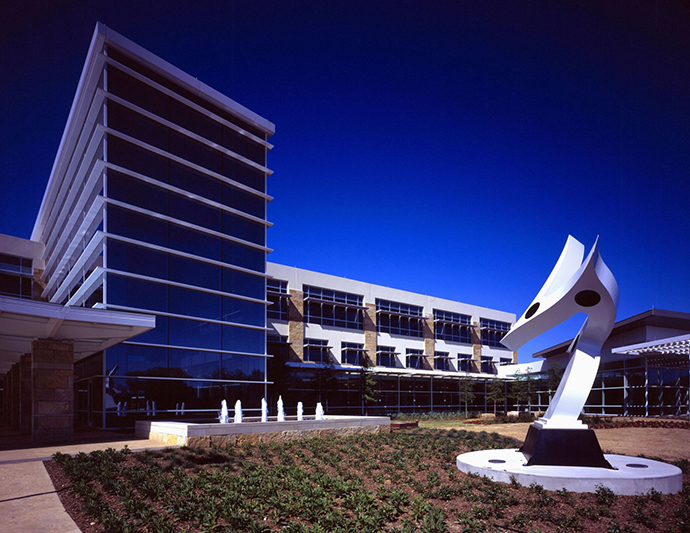 Global engineering and infrastructure firm Fluor is one of several Fortune 500 companies with global headquarters in Irving-Las Colinas.
Photo courtesy of Fluor

Irving/Las Colinas, a community of 240,000 that likes to call itself the "Corner Office of the Metroplex" now can boast that it's home to the global headquarters of six Fortune 500 companies: McKesson, ExxonMobil, Celanese, Commercial Metals, Fluor Corporation and Kimberly-Clark. Fifty-three Fortune 500 corporations have a presence in the area, which is home to almost 8,500 businesses in all.

"We would like to thank McKesson for its continued commitment to the Irving-Las Colinas community," said Beth Bowman, president and CEO of Irving Economic Development Partnership and the Irving-Las Colinas Chamber of Commerce. "Over the past two years, the company has been great stewards in the community, giving back and volunteering. I'd specifically like to thank David Evangelista, serving on our Board of Directors, for his time, leadership, and commitment to our Chamber and its mission."

Noting the Partnership's readiness "to work with the McKesson team as it evaluates potential job growth and future real estate needs," Bowman also thanked a list of elected officials from Governor Abbott to Irving Mayor Rick Stopfer and city council members to Lieutenant Governor Dan Patrick and Texas House Speaker Joe Straus for their pro-business approach. In an interview this week, she refrained from getting into McKesson specifics — though she did note the company's original project code name in 2016 was "Project Wiley." Asked with which locations Irving competed for this project, for instance, she demurs: "We believe we compete with a variety of communities regionally and nationally every day." Then she reiterated that it's business as usual in Irving.

"We truly are very excited for the commitment and announcement the company made publicly," she says. "But for the servant-leaders and committed men and women here, it's business as usual. We'll continue to be a resource for this company as well as others. We want to do everything we can to be sure their needs are met, and we understand those needs may change. We want to continue to be a resource however we can be utilized, but this is a normal business day for our team."

Well, maybe not that normal. But normal enough for a north Texas region seeing some 400 new people arrive every day — "which is healthy," Bowman says, "but we also want to make sure it is sustainable."

For one thing, that means a place that strives to be as friendly to startups as to giants. Bowman says in addition to big-company success, "50 entrepreneurs have determined to have a startup in our community in the past 12 to18 months. Coupled with our well educated, diverse population and workforce, in a community where diversity is celebrated [13th nationally in economic and racial diversity, according to Niche.com], we're giving you every reason to pack up and move." 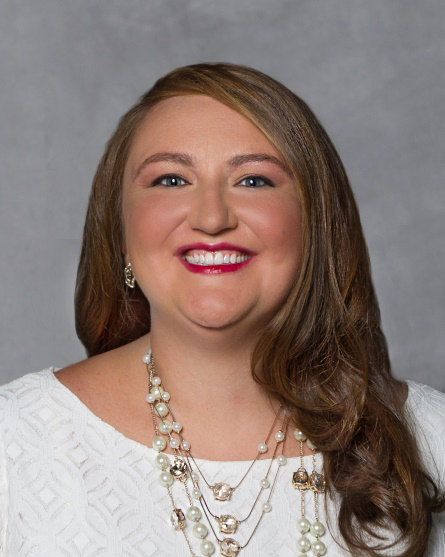 Beth Bowman is president and CEO of Irving Economic Development Partnership and the Irving-Las Colinas Chamber of Commerce.

She says there is demand for more quality-of-life amenities, and the community has delivered, from the Toyota Music Factory entertainment venue to the Water Street mixed-use development located in Las Colinas Business Park, which boasts an employment base of more than 120,000. Bowman also says the community is focused on providing a variety of housing options, in a community known for its diversity and, she says, for its sense of inclusion. She says general employer feedback shows companies are attracted to the area because of "access to a talented and diverse workforce, access to housing options, and within those housing options in the North Texas region, an abundance of quality-of-life amenities, couple with our central location and our business-friendly local elected leadership."

The cost of living is rising in the area — nearby Arlington and Fort Worth were among four Texas cities in the top 10 fastest-rising U.S. city costs of living in October analysis by Forbes — but it's fair to say it's not climbed to the heights reached in the Bay Area.
Among the 268 urban areas that participated in the third quarter 2018 Cost of Living Index published in November by C2ER – The Council for Community and Economic Research, metro San Francisco, with a score of 191, had the second highest after-tax cost for a professional/managerial standard of living after New York (with 100 being the average across all 268).

Site Selection has documented McKesson's growth over the decades, including exclusive interviews with corporate leaders and naming its original Las Colinas project in 2016 as one of our Top Deals of the Year (hey, what did we know?). But a McKesson spokesperson declined a request for an interview and declined to respond to questions about cost savings related to the move, employee takeup on relocation offers and how the company is approaching the departure from its Bay Area HQ.

The company in its press release pledged to continue having "a strong presence in California, employing more than 1,400 people, primarily in distribution operations and sales. The company opened a new distribution center for its medical-surgical division in Roseville, California, earlier this year. McKesson Ventures will remain in San Francisco, along with a technology development team for McKesson's U.S. Oncology Network."

McKesson last April launched a multi-year strategic growth initiative, "inclusive of plans to optimize the company's operating and cost structures. The company expects these initiatives and actions will generate approximately $300 million to $400 million in annual pre-tax gross savings that will be substantially realized by the end of Fiscal 2021," said last week's release.

"As part of our strategic growth initiative, we've developed a hub location strategy, co-locating people based on the type of work they do to improve teamwork, advance innovation and increase efficiency," said Brian Tyler, McKesson's president and COO, who will soon take Hammergren's place as CEO. "Bringing employee groups together in key locations will make McKesson a more streamlined and agile company, complementing our investments and improving operating profit growth for the organization. 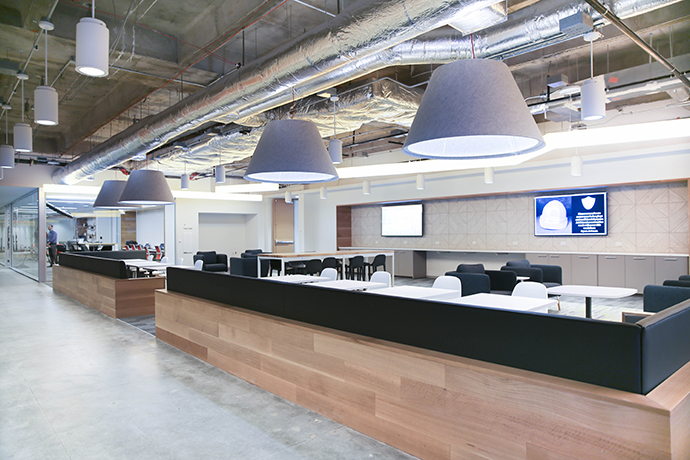 The McKesson campus is LEED-Gold certified and, like its sister McKesson Medical-Surgical affiliate’s HQ in Richmond, Virginia, has earned a WELL Building certification.
Photo courtesy of McKesson

"We are taking great effort, care and consideration to make this transition as seamless as possible for our associates who will be affected by this transition," Tyler said. "It is important to us that every employee is treated with dignity and respect, consistent with McKesson's ICARE shared principles. San Francisco-based employees are being offered the opportunity to relocate to Las Colinas and other hub locations. We look forward to bringing even more of our team together in our new, world-class global headquarters."

Irving will be ready.

"Friday was a five-star day for us in Irving-Las Colinas," the Chamber's Beth Bowman says, referencing her organization's five-star rating by the U.S. Chamber of Commerce. "It doesn't get much better than that. It's truly so rewarding, but we're on to the next opportunity."