Recent reports on obesity, diabetes and lifelong exercise offer looming clouds of concern and a few bright rays of encouragement. 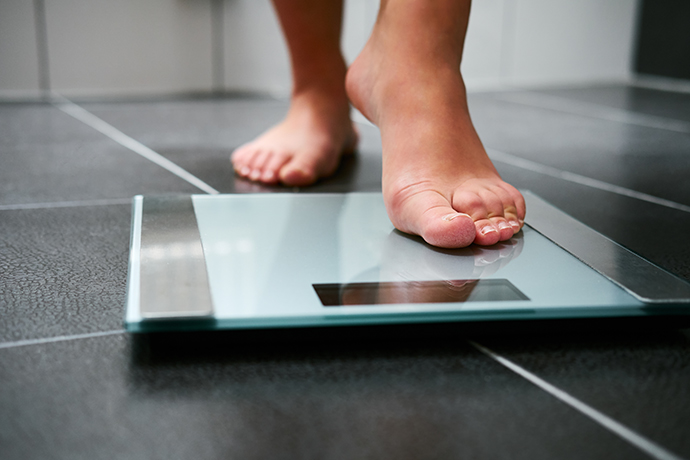 A batch of recent reports point to the economic as well as quality-of-life impacts associated with obesity and related chronic diseases and conditions.
Photo: Getty Images
by ADAM BRUNS

Properly evaluating a place usually involves creating a customized and prioritized scorecard that, depending on the business, might seek to measure anything from commute scattergrams and numbers of engineering graduates to seismic risk and availability of flatbed trucks.

Until robots fully take over, however, all companies have humans in common. So insights in health and well-being can be profound indicators for such factors as healthcare cost, absenteeism and productivity. A handful of reports released this fall sheds light on U.S. healthcare problems and potential, and they all have shedding weight in common.

One of them, released in November, is the latest report in the Gallup-Sharecare "State of American Well-Being" series, which ranks the 50 states and 186 metro areas by prevalence of diabetes. "The percentage of adults diagnosed with diabetes at some point in their lives has risen in 18 U.S. states in less than a decade, while declining in none," the report states. Alaska (8.4 percent), Colorado and Montana (in that order) had the lowest prevalence of diabetes in 2016-2017, while West Virginia, South Carolina and Mississippi had the highest — part of a long list of mostly southern states with prevalences over 14 percent.

In the obesity category, Colorado (with a prevalence percentage of 20.2) is the leanest, followed by Vermont, Massachusetts and California. Only two states showed a drop in obesity percentage between 2008-2009 and 2016-2017: Vermont (-1.1 percent) and Oregon (-0.7 percent). 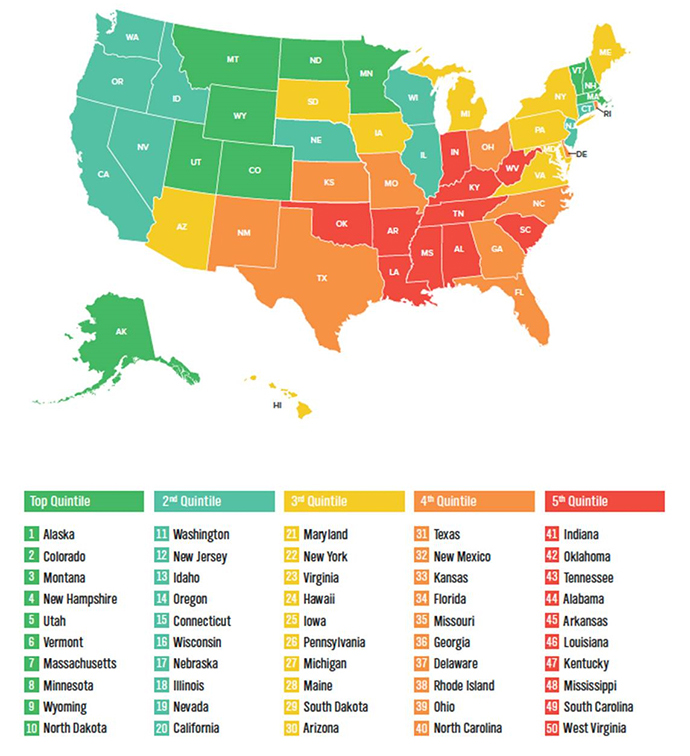 Calibrated by their obesity prevalence, Boulder comes in at No. 1 with a sick (in the best sense of the word) rate of 9.8 percent, followed by Santa Cruz-Watsonville at 16.2; Prescott, Arizona, at 17.5; and Santa Rosa, California, at 17.6.

Why do these things matter? A Gallup blog this month excerpted from a paper published in October by Science called "Well-Being in Metrics and Policy" by Gallup Senior Scientist and Brookings Senior Fellow Carol Graham, London School of Economics Fellow Kate Laffan and University of Maryland doctoral student Sergio Pinto offers some answers:

"Traditional income-based metrics that measure economic growth are necessary, but they do not tell us enough on their own," they write. "Metrics such as GDP do not explain, for example, why life expectancies in the U.S. are falling even as the stock market is booming and unemployment is dropping to new lows. Nor do they tell us why suicides are up in India when extreme poverty has fallen a lot."

While well-being survey results are viewed as "soft metrics," the authors say, they "add a dose of personal reality to these 'hard numbers' because they monitor what is actually happening in people's daily lives." Such metrics not only can inform social policy and environmental sustainability/quality-of-life factors, they also can indicate where income-based cost-benefit analysis falls short, the authors argue. "For example, closing a remote, rural post office that does not manage much mail and is expensive to reach may make fiscal sense," they write. "However, well-being surveys in the United Kingdom show that daily visits to the post office are important to residents in isolated areas, particularly older Britons, and a decision like this would have high costs to their welfare."

In some locations such as perennially low-ranking Mississippi, these costs are sparking action and even new real estate development. Among his other titles, Joseph C. Canizaro is the founder, president and CEO of Columbus Properties; a trustee and former chairman of the Urban Land Institute; and a founder and co-chairman of the Committee for a Better New Orleans. In an interview this week, he says his company’s Medical City at Tradition development in his hometown area of Biloxi was driven precisely by his home state’s perennial low rankings, specifically in diabetes prevalence. The request for his involvement came straight from Mississippi Governor Phil Bryant.

“His mother died from it, and I have Type 2,” Canizaro says. “Healthcare has always been an interest of mine.”

Originally the master-planned development was going to be a shopping center. Now, as new medical and nursing schools and other amenities open up, it's gradually becoming a place where people can shop for better health.

"I'm doing this because I'm trying to help," says Canizaro, a devoted Catholic who says his prayers at daily Mass include a focus on helping others. "I'm here to help the quality of life of all of our people," he says, "And if we can cure diabetes, we'll help millions if not hundreds of millions."

Cost-benefit analysis of the effects of obesity and chronic diseases on the U.S. economy is producing some hard — and hard to swallow — numbers. In late October, the Milken Institute report America's Obesity Crisis: The Health and Economic Impact of Excess Weight, reported, "The impact of obesity and overweight on the U.S. economy has eclipsed $1.7 trillion, an amount equivalent to 9.3 percent of the nation's gross domestic product" and driven mostly by lost productivity (more than $1.2 trillion of the total).

The report's estimates are based on an analysis of data compiled by the Centers for Disease Control and Prevention, the National Center for Health Statistics, the U.S. Agency for Healthcare Research and Quality, and the Bureau of Labor Statistics. The report relies on the World Health Organization's definition of overweight as a body mass index of 25 to 29.9 and obesity as a BMI of 30 or higher. The study draws on research that shows how overweight and obesity elevate the risk of 23 diseases such as breast cancer, heart disease, and osteoarthritis, and estimates the cost of medical treatment and lost productivity for each disease. 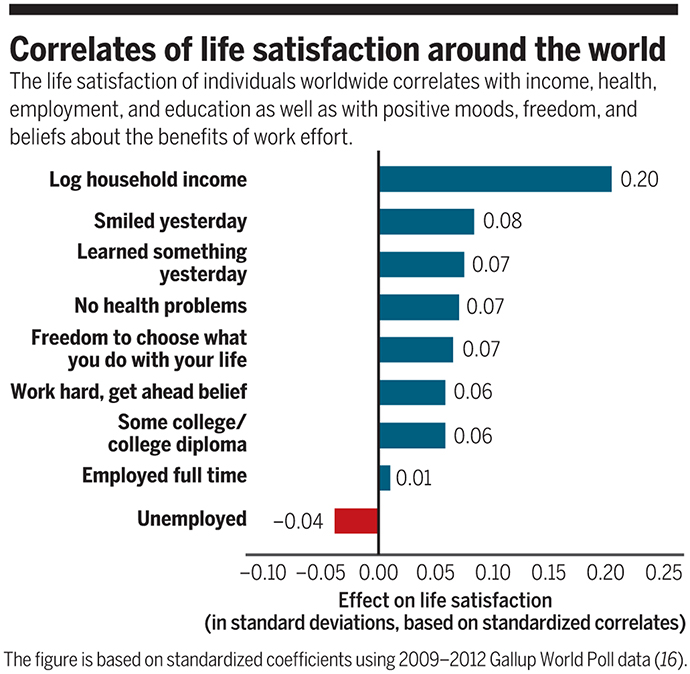 Health figures prominently among correlates for life satisfaction of individuals worldwide, according to recent Gallup research.
Graph courtesy of A. Kitterman/Science

"For example, the treatment cost for all type 2 diabetes cases — one of the most prevalent chronic diseases connected to excess weight — was $121 billion, and indirect costs were $215 billion," Milken reports. The findings suggest that more effective weight-control strategies could reduce both the health and economic burdens of chronic diseases, according to co-author Hugh Waters, director of health economics research at the Milken Institute.

"Despite the billions of dollars spent each year on public health programs and consumer weight-loss products, the situation isn't improving," Waters said. "A new approach is needed."

Lest one lose all hope as the next holiday party looms, it might be time to take some advice from your elders — if you can catch up to them.

New research from Ball State University in Muncie, Indiana (a state tied with Oklahoma with the 9th-highest prevalence of diabetes at 13 percent) , analyzed septuagenarians who have been exercising for decades, and found that they have heart and lung capacities and muscle fitness like healthy people in their early 40s.

Cardiovascular and Skeletal Muscle Health with Lifelong Exercise compared male and female exercisers in their 70s with their younger counterparts and sedentary people their own age. The study was published in August in the Journal of Applied Physiology.

" 'Exercise wins' is the take-home message," said Scott Trappe, director of Ball State's Human Performance Laboratory at the university's College of Health and leader of the 11-person research team.

With the average study participant, characterized as a lifelong exerciser, working out is a hobby, the research found. On average, each exercised about five days a week for about seven hours in total. 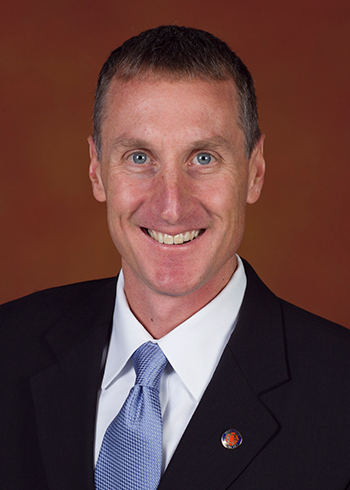 “ ‘Exercise wins’ is the take-home message.”
— Scott Trappe, Director of the Human Performance Laboratory at the Ball State University College of Health

"For some of the variables, the performance group had some metrics that were superior to the fitness people, and cardiovascular capacity was one of those," Trappe said. "But things like muscle health and capillaries to support blood flow, they were equivalent between the two groups. Higher intensity didn't necessarily take them to a higher place."

Researchers at the lab have been studying athletes since its creation in the 1960s. For this project, they recruited people who have been regularly training for decades by running, biking, swimming or whatever exercise they enjoyed.

"What was really interesting about this study is these folks came out of the exercise-boom generation, which really started in the 1970s when running and tennis became popular to the masses," Trappe said. "When we started this project, I didn't know if we'd find enough of these lifelong exercisers, and once we got into it, I was signing up for local races and introducing myself. But then what would happen is they would recruit — they'd bring in their training buddies. We had a husband and wife team who rode a tandem bicycle together. They've ridden 4,000 to 5,000 miles together outdoors since the mid-1980s. There's tons of people like this out there."

Trappe also noted that women who've exercised since the '70s were almost as plentiful as men, attributing that to not only the exercise boom of the 1970s but also to the passage of Title IX in 1972. The federal law opened the doors to competitive sports to millions of young women across the nation.

In a Ball State release, Trappe said the benefits of the study should be obvious for anyone: 30 to 60 minutes of exercise a day may be the key to a healthy life.

"If you want to put 30 to 45 minutes of walking in one day, the amount of health benefit you are going to get from that is going to be significant and substantial," he said. "Will it equal the person training for competitive performances? No. But, it will outdo the couch potato."

Hear that, couch potatoes? If these reports are any indication, it appears your friends and family aren't the only ones who care — so do your employers.