Among other products, the company has made cannula in the Cornhusker State for 51 years. What’s a cannula, you ask? 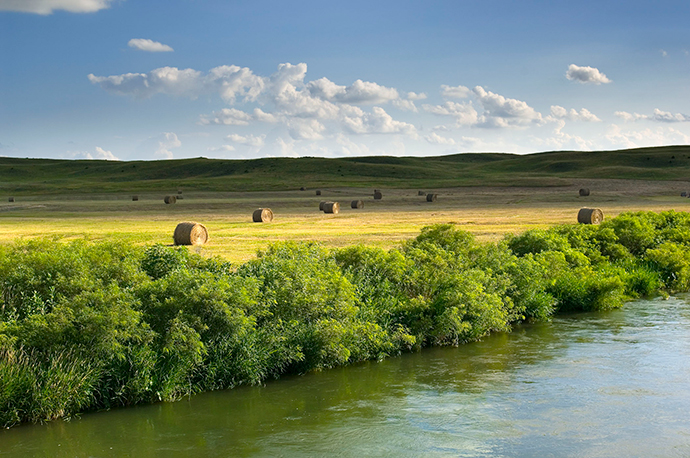 Among the Nebraska cities receiving investments from BD is Broken Bow, where the South Loup River flows through sandhill country, the crops and hunting are plentiful, and the company is helping grow the state’s workforce by partnering with the Nebraska Developing Youth Talent Initiative.
Photo courtesy of Nebraska Tourism
by ADAM BRUNS

Among the 90 or so facility investments by med-tech giant Becton, Dickinson and Co. (BD) that Site Selection's Conway Projects Database has tracked globally over the past 25 years, nearly 9 percent have occurred in Nebraska.

The proportion continues to climb, as the company in October announced a $200-million investment across its Nebraska portfolio of sites that will support the creation of 300 new jobs. That means the company has chosen to invest more than $340 million in the state over the past two years alone, a release explained, with new investments in Columbus joining a $100-million investment in 2016 in Holdrege and over $40 million spent on equipment, facility upgrades and infrastructure improvements in the company's manufacturing facility in Broken Bow.

"BD has been a part of growing Nebraska since 1949, and today marks yet another historic milestone for the company and its commitment to our state," said Nebraska Governor Pete Ricketts. "With more than 300 diverse job openings across BD facilities in Columbus, Holdrege and Broken Bow, there are many tremendous career opportunities for Nebraska's skilled workforce."

BD highlighted the fact that the company actively participates in Broken Bow in the state's Nebraska Developing Youth Talent Initiative (DYTI), which connects young Nebraskans to careers in the manufacturing and technology sectors. Nebraska has one of the lowest unemployment rates in the country — the U.S. Department of Labor's preliminary estimate for October was 2.8 percent. Thus, the release explained, "to achieve this significant hiring goal, programming support and partnership by the state will focus on continued housing development, workforce training and recruitment efforts heavily focused on the Veterans community and transitioning service members, ripe with engineering backgrounds."

"The ongoing public-private partnership between BD and the State of Nebraska has been extraordinary and is a testament to the rapid expansion across BD's footprint in Nebraska," said Jim Borzi, executive vice president and chief supply chain officer of BD. "The talented and dedicated people of Nebraska, who have made it possible for BD manufacturing operations to thrive for nearly 70 years, are to credit for allowing us to continue to expand and create new and diverse job opportunities. The 300 additional jobs created from today's investment will drive BD employment across the state to more than 3,000 people, and I encourage everyone to help spread the word and come join our growing team."

At an October 2017 event to break ground on the company's $60-million, 69,000-sq.-ft. expansion and upgrade of its Columbus-East facility (to be completed by 2021), Duane Ostdiek, plant manager for the BD Columbus-West facility, highlighted the 50th anniversary of cannula manufacturing at that facility. A cannula (from the Latin for "little reed") is a tube inserted into the body for delivery of medicine, removal of fluids or insertion of a surgical instrument, and is used in a variety of healthcare applications.

"BD is one of the largest users of plastic injection molded products in the world, with hundreds of billions of units produced internally each year," Borzi said then. "The new facility will centralize a majority of BD's North American plastic molding production and will support multiple business units in the U.S. and around the world."

Laurie Reagan, the plant manager for the new plastic molding facility, highlighted BD's plans to invest $7 million to retain and retrain its associates for the different skill sets needed for plastic molding manufacturing or to facilitate their transfer to its other manufacturing facility in Columbus or other sites across the BD network. BD partners with Central Community College to create customized curriculum for its retraining needs.