In late May, pharmaceutical company AbbVie donated $100 million to Direct Relief and Habitat for Humanity International to be used in the reconstruction of Puerto Rico health care system and to ensure access to affordable disaster-resistant housing. The company has operated on the U.S. territory for nearly 50 years. "It's time to act and work for Puerto Rico," said Felipe Palacios, general manager of the commercial affiliate AbbVie Puerto Rico. "We invite other companies to collaborate and contribute to the reconstruction of the new Puerto Rico."

Since Hurricane Maria, Direct Relief has been the largest non-governmental donor of charitable medical resources to Puerto Rico, providing more than 247 tons of requested medicine and medical supplies to 61 healthcare facilities across the island.

The Boston Globe fills us in on the 4.5-mile running loop that connects the denizens of the Cambridge biotech cluster to one another — depending, as it does in business, on who can keep up with whom.

Also in the land of the BIO conference, Thermo Fisher Scientific on June 4 opened its U.S. Precision Medicine Science Center (PMSC) in Cambridge, Massachusetts. But it wasn't the company's first: In 2017, Thermo Fisher opened its Precision Medicine Science Center in Guangzhou, China, where it was among the partners who hosted 450 people at a precision medicine conference in March.

At the Global Entrepreneurship Congress in Istanbul, Turkey, Heartstrings, an artificial intelligence technology made by the Swedish-German company Hippogriff AB that screens and provides early diagnoses of heart disease, took first place in the Global Entrepreneurship Network's 2017 Startup Open – defeating more than 1,000 startups from 82 different countries. Through the Startup Open competition, recognizes the top promising young firms that have yet to raise any outside capital from angel investors, venture capital firms or other formal sources of seed funding. 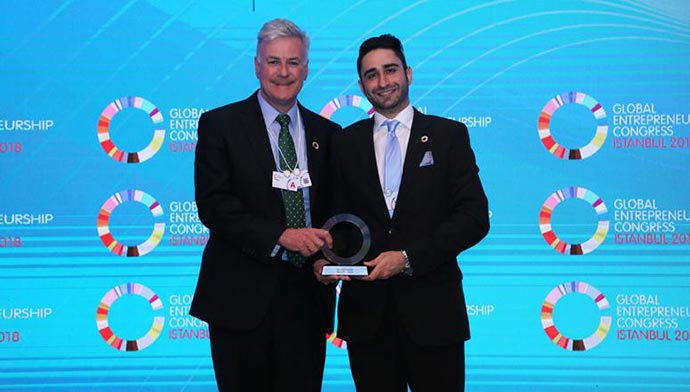 One year after opening at the Alexandria Center for Life Science – New York City, Alexandria LaunchLabs on June 14 hosted the NYC Life Science Innovation Showcase in order to award the second annual $100,000 Alexandria LaunchLabs Seed Capital Prize today to one of 25 emerging innovators and entrepreneurs. LaunchLabs now is home to over 20 life science startups — including firms from Vienna, Milan and Paris — selected from a pool of over 175 applicants, many of which have spun out from NYC's leading academic medical institutions.

JLABS NYC officially opens in the city next week, becoming the third biotech incubator to open after Alexandria LaunchLabs and BioLabs@NYULangone (December 2017). Meanwhile, based on the success of the NYC model, Alexandria LaunchLabs "will expand to Cambridge, Massachusetts, in the fall of 2018 to meet the cluster's critical demand for life science startup space and access to seed capital."

In a different part of the Empire State, med-tech firm Hill-Rom in May inaugurated its 100,000-sq.-ft. campus addition in Skaneateles Falls. One year after completing its $2-billion acquisition of Welch Allyn, the company announced in September 2016 its commitment to bring more than 100 new jobs to Central New York, where Welch Allyn has maintained a significant presence for more than 100 years. Hill-Rom's new facility in Onondaga County accommodates these new positions, a large portion of which are R&D and engineering roles, and the growth of Hill-Rom's Front Line Care business, of which Welch Allyn is the largest component. It also allows for centralization of local warehousing and distribution operations.

Medical cannabis, meet Medicine Hat. Alberta-based Aurora Cannabis, whose recent financials showed 200-percent year-over-year earnings growth, in April announced it is acquiring approximately 71 acres of land in Medicine Hat, Alberta, where the Company intends to build a 1.2-million-sq.-ft. high-tech hybrid greenhouse cannabis production facility it will call "Aurora Sun." The firm has signed a memorandum of understanding with the City of Medicine Hat that includes a prospective 10-year, 42-MW energy supply agreement. The new site will be 50 percent larger than Aurora's Sky, a 100,000+ kg per year Health Canada-licensed facility the company is completing at Edmonton International Airport. The new facility is intended to serve both the pending legal Canadian adult consumer market, and the quickly expanding international market.

With help from Binswanger, AmerisourceBergen has chosen to consolidate its headquarters via a mixed-use facility in Conshohocken, Pennsylvania, where the company will consolidate and expand its current operations in Conshohocken and Chesterbrook. “It is extremely exciting that Pennsylvania’s largest company by revenue is making a long-term commitment to the region in a way that will optimize operations and collaboration within the company," said David R. Binswanger, president and CEO of Binswanger. "In addition, Conshohocken gets a new landmark that will be a catalyst in its continued growth as a semi-urban environment.” AmerisourceBergen plans to house approximately 1,500 employees at the site, which will include a 400,000-sq.-ft. office building, an approximately 125-room hotel, a 1,500-space parking garage, public spaces and restaurants. 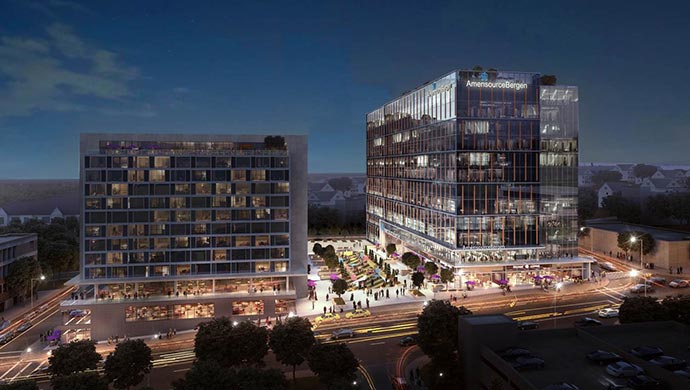 Med-tech firm BD (Becton, Dickinson and Company) on June 13 announced a $150-million investment in its existing Sumter County manufacturing facility in South Carolina. The company is projected to create an additional 125 new jobs over the next several years. The facility has been in operation since 1970, manufacturing blood collection devices. Some of those devices might eventually be put to use in Peru, where BD and WeRobotics recently completed a study evaluating deliveries to communities along the Ucayali River using drones.

On the same day in early June that it announced nearly 1 million sq. ft. in newly signed leases across three West Coast markets, Kilroy Realty Corporation said it has completed the $308-million acquisition of a life science development site (“Kilroy Oyster Point”) in South San Francisco. The site is fully entitled for 2.5 million square feet. “It offers all the advantages we look for in new development — a strong location in a world-class market serving a dynamic industry with all the services and amenities required to attract today’s young, urban innovative workforce," said John Kilroy, KRC’s Chairman and CEO. The firm plans to develop a laboratory and office complex that will eventually encompass 11 buildings spread across a nearly 40-acre waterfront site. South San Francisco is home to more than 200 biotech companies, including Genentech and Amgen. Even with 12 million sq. ft. of biotech lab and office space in the market, the region’s Class A office and laboratory space vacancy rate is less than 3 percent.