New Jersey–based Glenmark Pharmaceuticals announced this week it will enhance its capabilities in translational research by opening a new discovery center at the Biopôle campus of Lausanne. “Glenmark will continue to invest in, and operate its process development and biologics manufacturing center out of La-Chaux-de-Fonds, Neuchȃtel,” said the company. “Approximately 20 percent of current employees will be housed in the discovery group at Lausanne.” That equates to around 32 of the 160 employees at the Neuchâtel research center. "The Biopôle is one of the most vibrant ecosystems for life sciences innovation in Europe.” said Dr. Kurt Stoeckli, Glenmark’s president and chief scientific officer. “This expansion opens a universe of opportunity to foster our innovation capabilities by collaborating with the world class research centers, academic groups and hospitals in the Lausanne vicinity.”

The Canton of Vaud — the fourth largest of the 26 states that make up the Swiss Confederation — is home to more than 37,000 companies, with 16,000 people employed in the life sciences sector in the Lausanne Area. That’s one quarter of the total number of life sciences workers in Switzerland.

State-owned oil & gas giant PTT is joining forces with another state-owned entity — the Thai public health ministry’s Government Pharmaceutical Organization — to invest around $32 million in the country’s first-ever cancer drug production plant. According to multiple reports, production of chemotherapy and other therapeutic drugs will start by 2025 at PTT’s Map Ta Phut industrial estate in Rayong.

If big oil & gas can do it in Thailand, American ethanol can do it at home. According to the Nebraska Department of Economic Development (DED), bioscience companies employ more than 16,000 people in Nebraska, and the Nebraska Ethanol Board is one reason why. Nebraska is the nation’s second largest ethanol producer with 25 plants. “Ethanol and its co-products can serve as the foundation for many next-generation bioproducts from green chemicals to nutraceuticals and animal feed supplements,” says DED.

“Ethanol plant locations have a steady and abundant supply of grain, oilseeds, biomass and livestock, on which many bio-based technologies depend,” says Todd Sneller, Nebraska Ethanol Board administrator. “Nebraska has all the raw materials necessary to create strategic partnerships with bio-based companies.” Among the bioscience firms already located in Nebraska are NatureWorks (corn-based plastics), Novozymes (enzyme technology), Purac (lactic acid), Laurel BioComposite (bioresins from distillers grains) and Pharmgate (animal pharmaceuticals).

The Ethiopian Biotechnology Institute (EBTi) in Addis Ababa and genomics research organization BGI in February announced the signing of a Memorandum of Understanding (MoU) in the field of Scientific and Technology Cooperation in Genomics and Biotechnology, with the goal of developing critical genomics infrastructure in Ethiopia. “Ethiopia, because of its geographical position, ranges of altitude, rainfall pattern and soil variability has immense ecological and biological diversity with many species endemic to the country,” said Dr. Kassahun Tesfaye, director general of the EBTi. “The EBTi is therefore excited to formalize its partnership with BGI in order to help facilitate critical genomics research in Ethiopia to unlock this potential.”

‘There are many challenges affecting genomics research implementation in Ethiopia, and Africa more generally, including ill-equipped facilities, poor accessibility to research centers/infrastructures and lack of local expertise. Our partnership with EBTi is about local capacity building and empowering local researchers to address some of these challenges,” said Matt Poulter, BGI’s business development director for Africa.

Heraeus Medical Components, part of the German technology group Heraeus Group, on February 1 held the grand opening of a new manufacturing facility at its site in La Lima Free Zone & Business Park in Cartago, Costa Rica. The company expects to produce over 2 million cardiovascular access guidewires alone in 2018, in addition to other interventional medical device products. “With expected growth in the future, the site in Cartago was designed with the ability to double the manufacturing footprint for future expansion,” said the announcement from the Costa Rican Investment Promotion Agency (CINDE). “With Cartago's skilled workforce and Costa Rica's strong business climate and med-tech community, we are excited to expand our presence here," said Jan Rinnert, chairman of the Heraeus Board of Management.

The site replaces the company's first Costa Rica location in San Jose, which began operations in 2012. The larger facility, which was completed in June 2017, has allowed Heraeus to triple its workforce to over 160 employees including roles in engineering and operations. The company is expected to double the number of jobs by 2020. 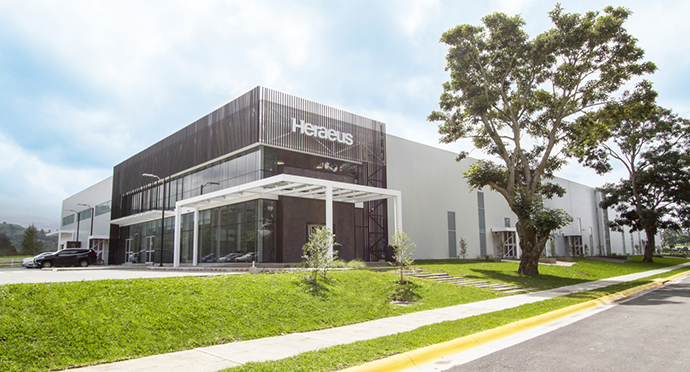 The Heraeus Medical Components site in Costa Rica employs more than 160, and may double that number by 2020.
Image courtesy of Heraeus 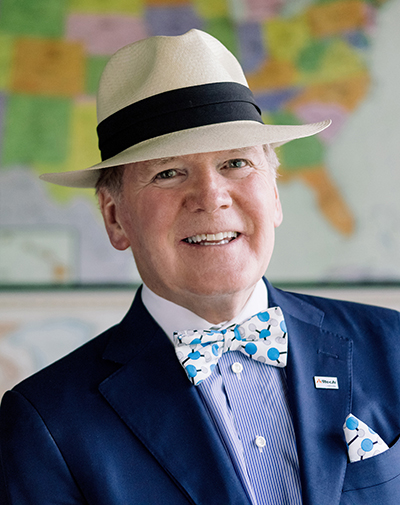 Dr. Pearse Lyons (pictured), the Irish-born entrepreneur who founded animal nutrition and genetics firm Alltech, passed away on Thursday, March 8, at the age of 73.  “We are all deeply saddened by my father’s passing,” said Dr. Mark Lyons, Pearse’s son and chairman and president of Alltech, lauding the “extraordinary team” (now numbering 5,000 around the world) that his father built. “He planted seeds that will produce a bountiful harvest for the world in the years to come.”

In lieu of flowers, the family is encouraging donations to the Alltech ACE Foundation, a 501c3 nonprofit organization that funds a variety of philanthropic endeavors, including the primary schools in Haiti we documented in “To Life!” published in this newsletter in 2011. An interview with Alltech VP Mike Castle is the centerpiece of an agribusiness spotlight in the March 2018 issue of Site Selection, and will be posted on March 15, two days before Dr. Lyons’ funeral in Lexington on St. Patrick’s Day.

In response to “growing demands from biopharmaceutical manufacturers, diagnostics companies, laboratories, distributors and care providers to ship specialized commodities when security, time and temperature control are a high priority,” UPS has essentially doubled the number of countries and territories to which customers can ship biological substances, dangerous goods in excepted quantities, and shipments utilizing dry ice via its International Special Commodities program. Among the more than 100 places now added to the program are India, Egypt, Nigeria, Bahrain and Kazakhstan. UPS has approximately 7 million sq. ft. of cGMP- or cGDP-compliant healthcare distribution space.

One of the companies making equipment for that specialized healthcare and life sciences supply chain is Terso Solutions, Inc., which just opened its new US production facility based near the company’s headquarters in Madison, Wisconsin. The move from the current 6,000-sq.-ft. facility to a 30,000-sq.-ft. production facility considerably increases Terso's manufacturing capacity and plays a fundamental role in the company's overall global manufacturing capabilities.

"Our investment in the new US production facility reflects the strength of our business as well as the growing adoption of RFID systems as the most proactive and viable solution for solving complex inventory issues in healthcare and life science," said Joe Pleshek, Terso Solutions CEO and president. The facility is expected to increase the company’s production team by up to 200 percent. 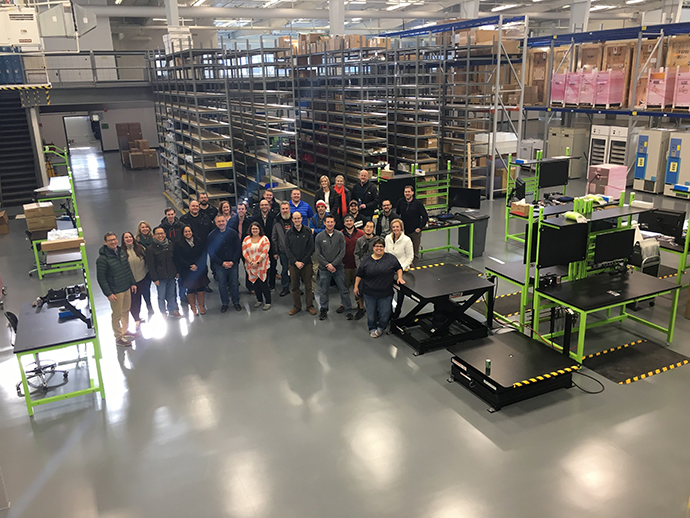 At the Asia Biomanufacturing and Biologistics conference and exhibition held in Singapore in late January, organizer IMAPAC and its judges announced that Netherlands-based Buck Consultants International (BCI) had been chosen by global biopharma and medical device companies operating in Asia as the top Supply Chain Consulting Partner. “Healthcare is a fast growing industry in the Asia Pacific region,” said Sui Leng Khoo, BCI’s Singapore-based vice president for the region. “Countries to watch in the next years are Singapore, South Korea, China, Taiwan, Thailand and India.”

The “A”s have it in Atlanta, where in early March, Art Deas, CEO of Alora Pharmaceuticals, LLC — parent company of Avion Pharmaceuticals, LLC, and Acella Pharmaceuticals, LLC — announced the relocation of the corporate headquarters of its two companies to a new 58,000-sq.-ft. facility in Alpharetta. Not to be outdone, Portman Holdings recently secured financing through SunTrust, Regions and PCCP for its $150-million, 21-story office development for healthcare provider Anthem in the thriving Technology Square neighborhood by Georgia Tech’s campus in Atlanta, not far from Portman’s Coda tower. Visionary architect and developer John Portman died in December at the age of 93. 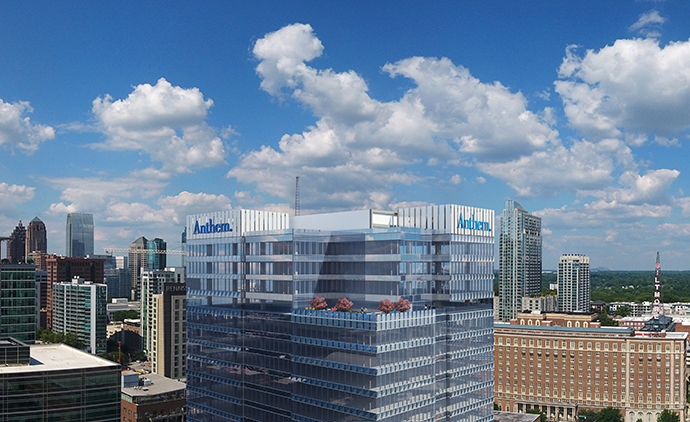 Anthem Technology Center will be a 352,000-sq.-ft. build-to-suit building near Georgia Tech in Midtown Atlanta.
Rendering courtesy of Portman Holdings