Five years from now, a new neutron source in southern Sweden will try to give Oak Ridge a run for its money. 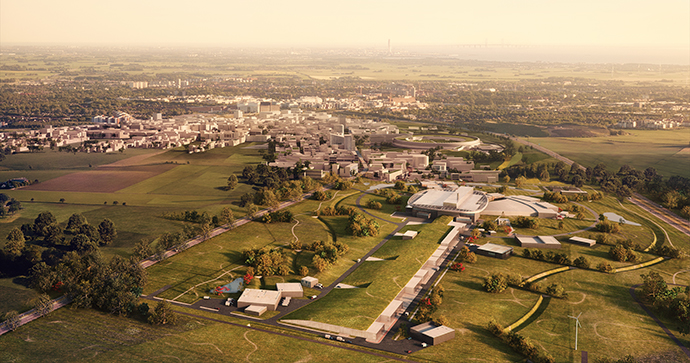 A digital model of the European Spallation Source in Lund, Sweden, showing the MAX IV synchrotron and the anticipated Science Village development project.
Image courtesy of ESS
by ADAM BRUNS

The word of the day? Spallation. It's what happens when high-energy particles strike a nucleus, causing the ejection of the fragmented materials therein (the spall), which may contain protons, neutrons or new nuclei. The applications of the work can apply across a host of disciplines, including environmental technology and the life sciences.

Earlier this month, the Nordic Investment Bank (NIB) and the special-purpose vehicle SKR Spallation AB signed a 23-year loan agreement of €30 million for the construction of offices and laboratories at the site of the European Spallation Source in Lund in southern Sweden. 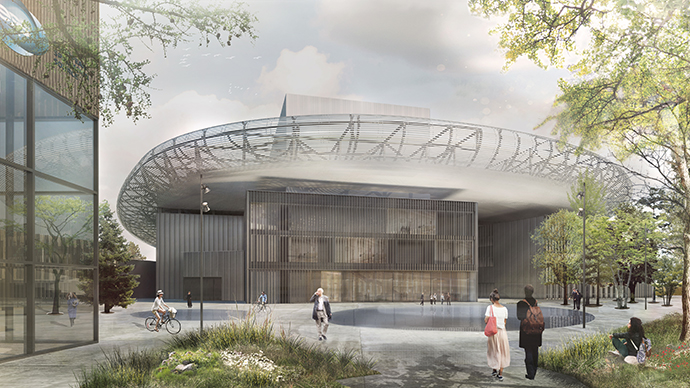 According to the bank, the ESS Campus includes the construction of laboratories and workshops, office premises with up to 450 work places and a canteen for 200 people.

"ESS is based on what will be the world’s most powerful neutron source yet constructed and, upon completion, will provide research opportunities in fields such as life sciences, energy, environmental technology, telecommunications and fundamental physics," said NIB.
Construction will be completed in 2020, with the ESS opening for researchers in 2023.

“Together with the neighboring MAX IV synchrotron lab, ESS forms one of the largest research centers in Europe, and will provide research opportunities for up to 5,000 scientists every year, ” said Henrik Normann, NIB president & CEO, in a release.

How does spallation work?

"The Hubble Telescope, Voyager 2, and the Very Large Array allow us to directly and indirectly investigate the distant places and hidden elements of our universe," the ESS explains. "In the same way, a neutron source and its instruments enable scientists to see and understand basic atomic structures and forces. It can be compared with a giant microscope for the study of different materials—from plastics and pharmaceuticals, to engines, proteins, molecules and nanotechnology."

The facility design and construction includes the most powerful linear proton accelerator ever built, a four-metric-ton, helium-cooled tungsten target wheel and a supercomputing data management and software development center. The accelerator already is 43 percent complete.

Construction of the pan-European project (15 nations, with Sweden and Denmark as hosts) began in summer 2014, with a data management and software center located in Copenhagen, about 35 minutes away by car. According to ESS, between 2,000 and 3,000 guest researchers will carry out experiments at ESS annually, some from European universities and institutes, and some from industry.

"Scientists and engineers from more than 100 partner laboratories are working on updating and optimizing the advanced technical design of the ESS facility, and at the same time are exploring how to maximize its research potential," says ESS. One research example is the work of PhD student Swati Aggarwall to optimize crystallization methods for proteins key to understanding the basic biological processes of proton pumps. Membrane proteins form more than 85 percent of drug targets, but just 600 unique membrane protein X-ray crystal structures have been determined, says ESS. The site's NMX macromolecular diffractometer will open new avenues for structural biology with neutrons.

ESS is working with nearly 40 European partner institutions, and more than 120 collaborating institutions worldwide under the in-kind model. "As the success of ESS to a great extent depends on schedule performance, in-kind agreements are on the critical path," says ESS. "In total, it is estimated that more than 35 percent of the €1.843-billion [US$2.27 billion] ESS construction cost will be supplied through in-kind contributions. Work packages actively under discussion with potential partners amount to approximately €385 million [US$474 million], 55 percent of the total estimated in-kind value of ESS."

"These partner laboratories, universities and research institutes are also contributing human resources, knowledge, equipment, and financial support through In-Kind Contributions that will comprise up to 40 percent of the construction budget.

The machines and mechanisms at the ESS can sound like they're straight out of a good sci-fi novel. Take the organization's January 3 news, when the ESS Target Division announced that manufacturing of all three Butterfly V2 cold moderators was completed in December, thanks to in-kind partner Forschungszentrum Jülich (FZJ). "The optimized design is estimated to increase neutron flux at ESS by up to a factor of 2.5 over the original 2012 design," the ESS informed us. "The team at FZJ has successfully electron-beam-welded and leak-tested the three moderator vessels, making them ready for assembly in the Moderator & Reflector Plug."

According to a December release, one of the key benefits of the high neutron flux at ESS is that it will significantly expand opportunities for studies of soft matter and other biology and life sciences research key to fighting a wide range of diseases, including Alzheimer’s, cancer and the threat of humanity’s increasing resistance to existing antibiotics.

If spallation sounds vaguely familiar, you may b thinking of the Spallation Neutron Source (SNS) at Oak Ridge National Laboratory, which began operation in 2006 and is the most powerful accelerator-driven neutron source in the world, operating at a power of 1 MW. "Sub-microsecond 60 Hz proton pulses from the accelerator complex impinge on a liquid-mercury target, generating pulses of neutrons that feed 19 operating instruments," with space for a maximum of five more, Oak Ridge expolains. "The number of unique users served has grown rapidly, reaching 900 in 2014. Beam time is oversubscribed by factors of two to five, reflecting both the demand for this facility and the overall lack of capacity in terms of neutron instruments in the U.S."

The life sciences applicability of spallation is repeatedly evident at SNS too. In February, the site announced that a team of researchers led by national lab used neutron macromolecular crystallography to investigate the different states of three glaucoma drugs as they interact with the targeted enzyme, human carbonic anhydrase II (hCA II). 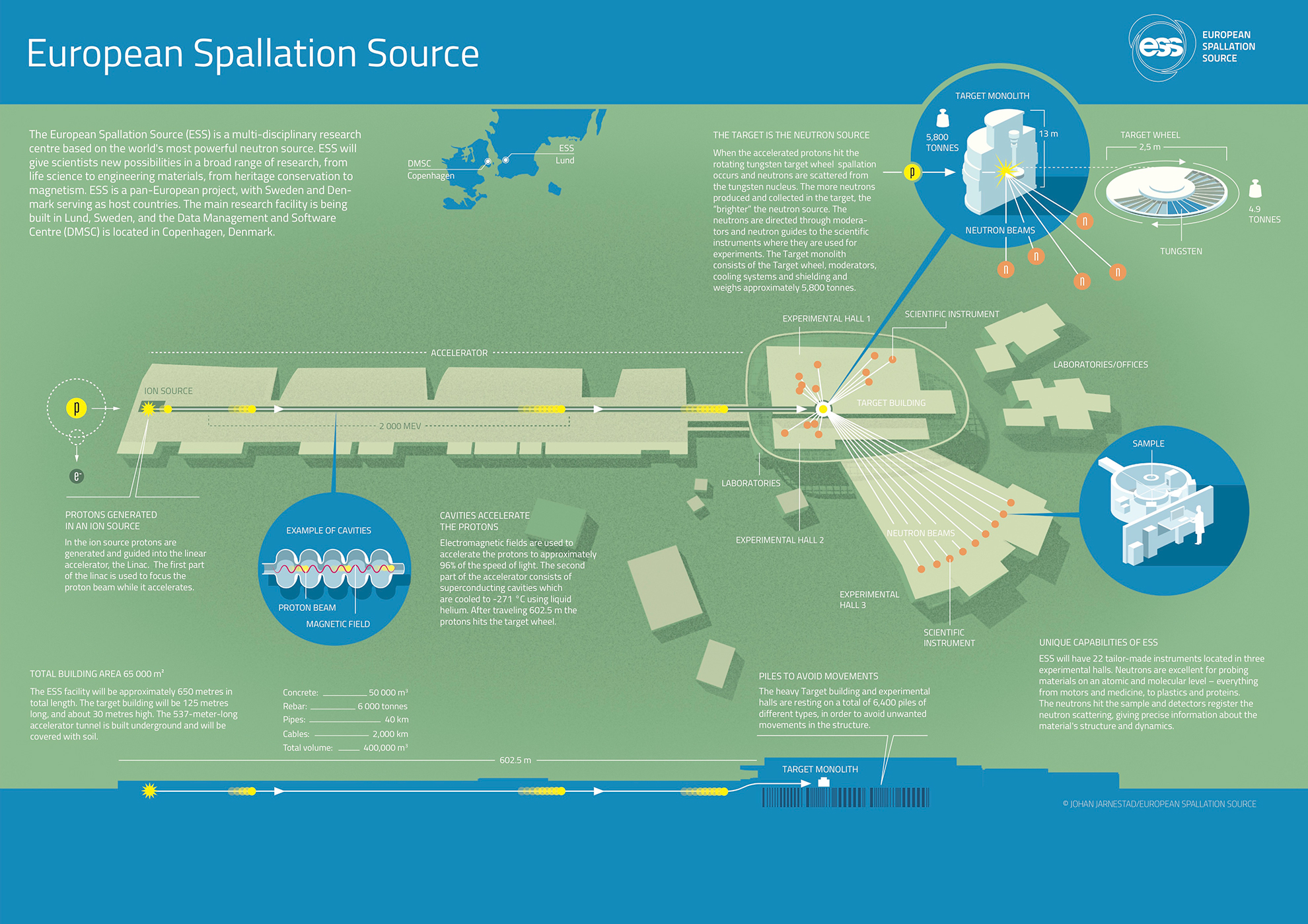 How does ESS work? Click to enlarge (+)
Infographic courtesy of Johan Jarnestad/ESS

“Our goal was to observe differences in the presentation of three clinically used glaucoma drugs while they are bound to the hCA II enzyme,” said Andrey Kovalevsky, an instrument scientist at ORNL and a senior co-author of the study. “By looking at how well these drugs target hCA II in protonated, neutral and deprotonated states, we hoped to obtain insights that would make it possible to improve these medicines so they can better target enzymes linked to cancer.”

Protonation refers to the presence, addition or loss of a proton, which gives the drug a neutral, positive or negative charge, respectively. Altering a drug’s charge could change its ability to recognize and bind with its target protein and consequently, its effectiveness.

“We want to exploit the difference in charge, pH and temperature to see if we can design drugs that are more effective at targeting these enzymes,” said Kovalevsky. “If we can understand binding at the atomic level, we can redesign drugs and turn them into stronger and more selective ‘magnets’ that will be attracted to cancer-associated enzymes."

“When you use neutron diffraction you don’t have radiation damage, so you can do your study at room temperature,” said Robert McKenna, a professor at the University of Florida and a senior co-author of the study. “In addition, freezing crystals may alter the drug and enzyme, introducing a false view into the study, while room temperature studies more closely resemble the environment the drug will be used in.” 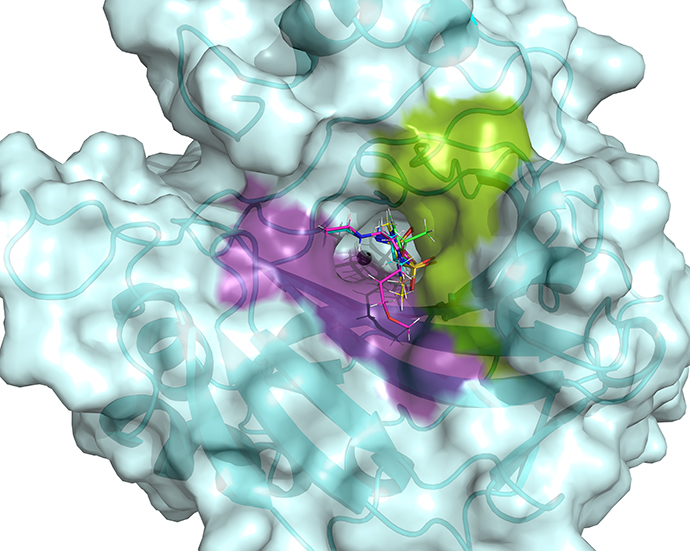 In an experiment carried out with the Spallation Neutron Source at Oak Ridge National Laboratory in Tennessee, the hCA II active site is flanked by hydrophilic (violet) and hydrophobic (green) binding pockets that can be used to design specific drugs targeting cancer-associated hCAs. Five clinical drugs are shown superimposed in the hCA II active site, based on room-temperature neutron structures.
Image courtesy of Andrey Kovalevsky/Oak Ridge National Laboratory, U.S. Dept. of Energy