Genetic Engineering News has shared its top 10 European biopharma clusters, which overlap pretty consistently with the analysis KPMG provided in this space in August.

According to new analysis by Jonathan Dworin for the State Science & Technology Institute (SSTI), federal funding for science and engineering (S&E) R&D grew by $7.2 billion from 2002 to 2016, reaching more than $31.6 billion. “This represents a 29.4 percent increase during the period, or approximately 2 percent per year, according to an SSTI analysis of data from the National Science Foundation’s National Center for Science and Engineering Statistics,” he wrote. “Among states, California ($4.3 billion), New York ($2.4 billion), and Maryland ($2.3 billion) received the most in federal funds for S&E R&D in 2016, while Baltimore ($2.0 billion), New York City ($1.7 billion), and Boston ($1.3 billion) led among metropolitan areas.” Late September brought further data from the National Science Foundation showing that businesses spent $375 billion on R&D performance in the United States in 2016, a 5.3 percent increase from 2015. Pharmaceutical and medicines R&D spending comprised 17 percent of the total ($64.6 billion).

Life Sciences Forum 2018 took place in San José, Costa Rica, this week, where day one featured a $5-million project investment announcement by Precision Concepts Medical Technologies. Two videos from both days of the conference (where Site Selection served as a media partner) feature ample testimony by company leaders and experts, as well as evidence of young talent on hand.

The 2018 World Robotics Report – Service Robots, issued by the International Federation of Robotics (IFR) from Tokyo this week, found that the sales value of service robots for professional use increased by 39 percent to US$6.6 billion in 2017, while the total number sold in this robot category rose by 85 percent. While logistic systems accounted for 63 percent of the total units and 36 percent of the total sales (in value), the total value of sales of medical robots increased to US$1.9 billion, accounting for 29 percent of the total sales value of professional service robots in 2017. The most important applications, said the IFR, “are robot-assisted surgery or therapy and rehabilitation robots, which assist people who have a disability with necessary activities or provide therapy to people with the aim of improving their physical or cognitive functions.” 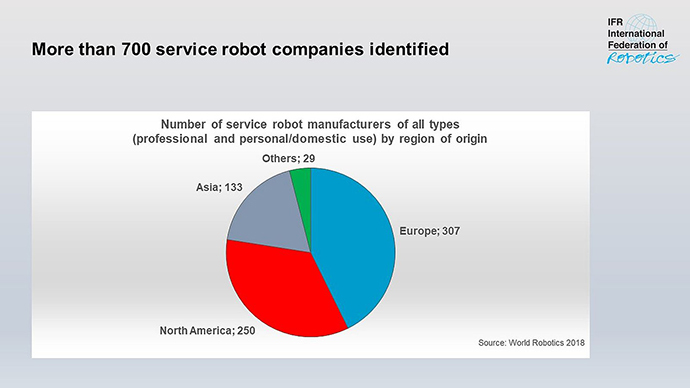 Some of those robots might be on hand in Memphis, Tennessee, and Waalwijk, Netherlands. Those are the two locations where HealthLink Europe & International, part of the Base Logistics Group since a 2017 acquisition, is expanding its operations, moving activities in Memphis to a 110,000-sq.-ft. warehouse and in Waalwijk to a 170,000-sq.-ft. warehouse by the first quarter of 2019. Rick Hughes, managing director of HealthLink International, said proximity to FedEx (less than seven miles from the Super Hub) was the deciding factor in the decision to base HealthLink's North American operations in Memphis: "We are able to reach both coastlines overnight for next-day deliveries with excellent freight rates."

The new Waalwijk facility will replicate and enhance all warehouse activities that are now taking place in the current HealthLink warehouses in 's-Hertogenbosch and Rosmalen. The new temperature-controlled warehouse in Waalwijk has a range between 59 and 77° F and also contains a large space with a temperature between 35 and 46° F. In addition, says Joost van den Heuvel, managing director of HealthLink Europe, "We will be offering services there such as cleaning and disinfecting of instrument sets." Globally, HealthLink has 120 employees and works with over 150 medical device customers.

A survey released this week by the U.S. Green Building Council (USGBC) reports that employees who work in LEED-certified green buildings are happier, healthier and more productive than employees in conventional and non-LEED buildings. Among the findings:

In June, Stryker Corporation —Michigan’s best-known medical device firm — committed to a $109-million expansion of its 79-acre global headquarters site in Portage in Kalamazoo County. In support of Stryker’s private investment to expand its manufacturing, the Michigan Strategic Fund (MSF) approved a $2.6-million Michigan Business Development Program performance-based grant. In addition to the 253,000-sq.-ft. expansion, Stryker is expected to add 260 jobs by end of 2025, said a release from Michigan Economic Development Corporation, with an annual salary of $73,000.

This week, MEDC announced that Healthmark Industries Inc., which aids healthcare facilities in their delivery of surgical instruments and other lifesaving medical devices to patients, plans to construct a new facility in its home of Fraser, Michigan, expanding its own global headquarters, manufacturing and assembly operations. The project is expected to generate more than $12 million in private investment in the Fraser Industrial Park and create 139 jobs, resulting in a $1-million Michigan Business Development Program grant, as well as a property tax abatement offer from the city. “Michigan was chosen over competing sites in Washington, D.C., Arizona and Florida,” said MEDC. 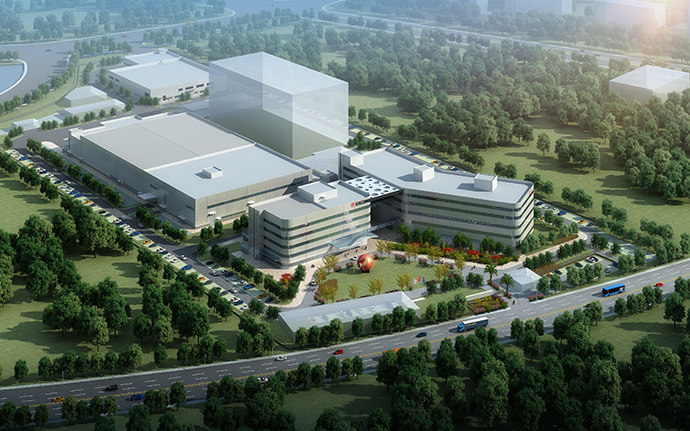 GE says the KUBio can be constructed, assembled and fully fitted-out to current Good Manufacturing Practices (cGMP) standards in approximately 18 months — “up to 50 percent faster than traditional manufacturing facilities that usually require approximately three years before they are fully commissioned and qualified.” The GE division has delivered three KUBios to China and over 50 FlexFactories globally. 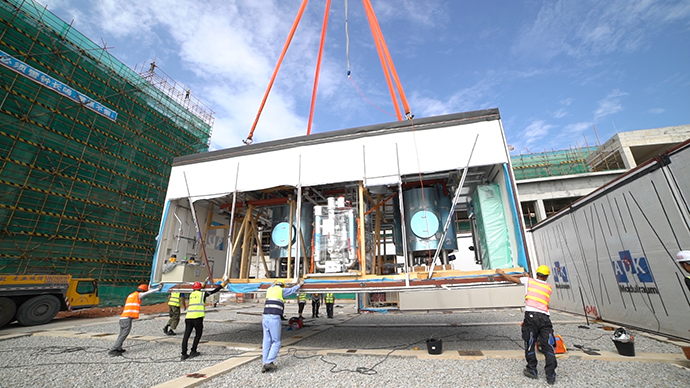 BeiGene is moving fast on a new site in Guangzhou thanks to use of the KUBio modular biomanufacturing product.
Images courtesy of GE

West Pharmaceutical Services, Inc., the Pennsylvania-based maker of solutions for injectable drug administration, has officially opened its new global center of excellence in Waterford, Ireland. "Our investment in Waterford, in addition to our previously announced investments in Kinston, N.C., Jurong, Singapore, and Dublin, Ireland, enable West to provide the highest levels of quality across the products and services we provide for the global customer base we serve,” said President and CEO Eric Green.

The new, 20,500-sq.-m. (220,667-sq.-ft.) facility, situated on a 44-acre (18-hectare) campus, will produce West's proprietary elastomeric laminate sheeting, which is used to package insulin for use in pen injectors. Additionally, it will offer high-value finishing for components, including stoppers and plungers, produced at other West facilities around the world. West's Waterford facility currently employs approximately 100 people in both local and global functions, with plans for additional hiring. West also has a manufacturing and development center in Dublin that provides design, development and manufacturing services for pharmaceutical and medical technology customers. The Dublin site recently completed an expansion to accommodate new customer programs and employs approximately 600 people.

In late September, Datwyler, a supplier of customized sealing solutions to global biotech and pharmaceutical markets (among other divisions), celebrated the official opening and start of production of its new facility with First Line standard in Middletown, Delaware, where the company is investing more than $100 million and creating 120 new jobs. With the expansion — which the company calls “the industry's most advanced production facility of its kind in the United States” — Datwyler will be able to increase its global First Line production by 50 percent by 2020. Datwyler's two other facilities with First Line standard are located in Alken, Belgium, and Pune, India, enabling the company to cater to all major healthcare markets in Europe, the Asia Pacific region, and the Americas. 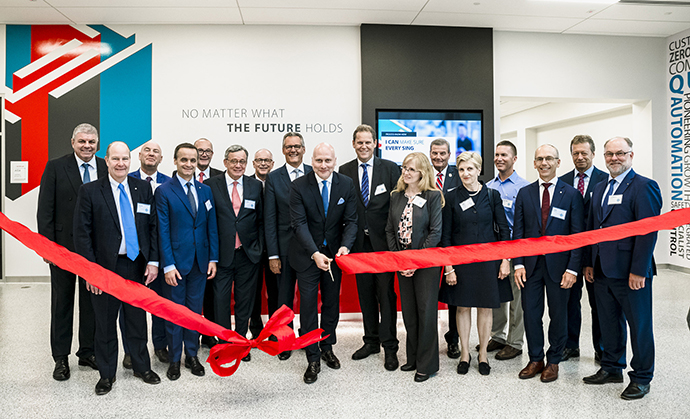