If drugs are the lifeblood of the life sciences, their abuse and misuse by the workforce is a health crisis. 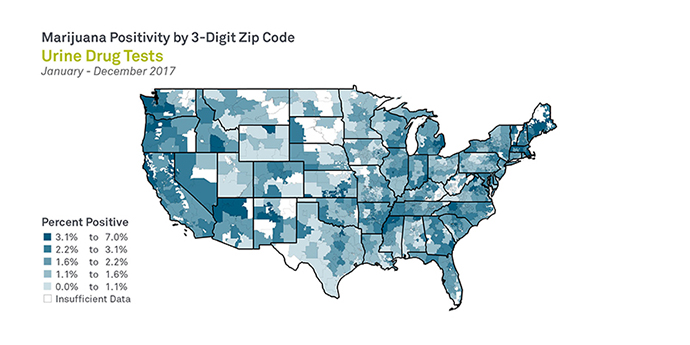 Maps and charts courtesy of Quest Diagnostics
by ADAM BRUNS

The number 420 is everybody's favorite code for marijuana use. A relevant number for employers, however, may be 620.

That's the percentage by which medical marijuana use in the U.S. increased in 2017 vs. 2016, according to the Health Trends report released in September by Quest Diagnostics entitled "Drug Misuse in America 2018," based on 3.9 million de-identified test results performed for patients by Quest between 2011 and 2017.

Recreational marijuana use actually decreased by 5 percent. However, the overall recreational rate of use, at 14.7 percent, was still higher than medical marijuana's. Analysis of workforce drug use and misuse that Quest released in May showed marijuana positivity in drug tests rose considerably last year in states that recently enacted recreational use statutes (surprise, surprise).

2018 marks thirty consecutive years of the Quest Diagnostics Drug Testing Index™ (DTI), an analysis of national workplace drug positivity trends based on the company's de-identified laboratory data. In 1988 when it began, the DTI analysis found that the overall drug positivity rate among American workers was a jaw-slackening 13.6 percent. In 2017 and 2016 that rate was 4.2 percent, which Quest labeled "a dramatic increase over the 3.5 percent positivity rate from 2012, which represented a 30-year low." (A spokesperson says the drug testing index does not address misuse of alcohol.) 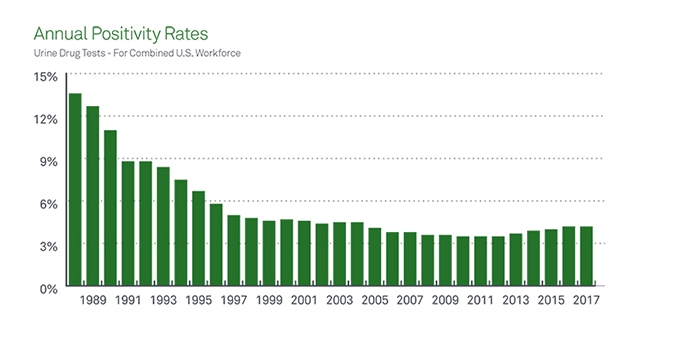 The larger concern is opiates. Recent interviews bear this out. One expert on the shale boom told me there's an opiates crisis even in states where shale work is driving positive economic momentum, observing that many energy companies "are amenable to unionized labor" because unions' screening means it's largely opioid-free labor. "We have a difficult time getting people to pass a drug test," a company leader told me. "It is affecting us," as well as other companies in his region. Business leaders don't want to sound negative about their region, but then again, the problem is not confined to any one area. "It's a widespread problem," he said. "It's not just here."

The good news? Opiate misuse and abuse rates are dropping.

"Thirty years in, this year's results again demonstrate the ever-evolving threat that substance abuse poses to workplace safety. With the prescription opiate crisis filling the headlines, the significant drop in opiate positivity is a promising sign," said Matt Nieman, general counsel, Institute for a Drug-Free Workplace and Principal, Jackson Lewis P.C. "Yet, the 10-year high in positivity rates — spurred by nationwide surges in cocaine and methamphetamine positivity as well as double-digit marijuana spikes in states with newly implemented recreational laws —serves as a stark warning that efforts to prevent substance abuse in the workplace are as important today as ever." 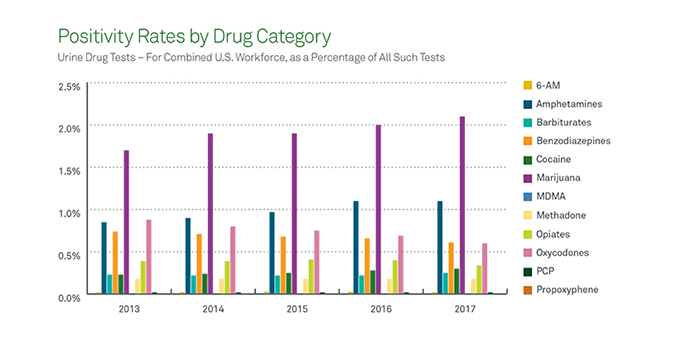 "We're encouraged by a decline in the use of non-prescribed opioids and other drugs among general care patients, but alarmed by sharp increases for certain drugs among patients in treatment for substance use disorders (SUD)," said lead author F. Leland McClure, director, medical science liaison, medical affairs, Quest Diagnostics.

"Among patients in treatment for SUD, the data show use of non-prescribed and illicit drugs surged across almost all drug classes," said the Quest report. "Additionally, for this group of patients, misuse of heroin and non-prescribed fentanyl increased nearly 400 percent."

Meth, Cocaine and Your Backyard

Quest Diagnostics performs a range of services in addition to drug screening. Headquartered in Secaucus, New Jersey, the company annually serves one in three adult Americans and half the physicians and hospitals in the United States; employs 45,000 worldwide; and reported 2017 revenues of approximately $7.7 billion.

The percentage increase in these four divisions ranged between nine percent and 25 percent between 2016 and 2017."

Cocaine positivity in urine testing increased significantly in certain states, with double-digit year-over-year increases in at least four of the five past years in the states of Nebraska (91-percent increase between 2016 and 2017), Idaho (88-percent increase), Washington (31 percent), Nevada (25 percent), Maryland (22 percent), and Wisconsin (13 percent).

On a more positive positivity note, the positivity rate for opiates in the general U.S. workforce in urine drug testing declined 17 percent between 2016 and 2017, said Quest, with opiates other than codeine at their lowest positivity rate in more than a decade. Nevertheless, struggles continue, especially in rural areas. This graph from the CDC shows suspected opioid overdose rates per 10,000 visits to ERs by U.S. region:

A new NPR/Robert Wood Johnson Foundation/Harvard T.H. Chan School of Public Health poll released this week finds that rural Americans cite drug/opioid abuse as the biggest problem facing their local community (25 percent), followed by economic concerns (21 percent). The poll of 1,300 adults living in the rural United States found that a majority of rural Americans (57 percent) say opioid addiction is a serious problem in their community, and about half (49 percent) say they personally know someone who has struggled with opioid addiction.

"What has been widely recognized is the serious economic problems facing rural communities today. What has not is that drug/opioid abuse in rural communities is now viewed with the same high level of concern as economic threats," said Robert J. Blendon, co-director of the survey and the Richard L. Menschel Professor of Health Policy and Political Analysis at Harvard T.H. Chan School of Public Health.

Chill Out or Sound the Alarm?

As for what seems like the less scary drug of marijuana, some see it as a tool to fight the opiates scourge, at least in medicinal form. Josh O'Neill, chief business development officer at Vireo Health, told me last year that his vision is to bring medical cannabis into the mainstream through his company's pharmaceutical-like processes. "One of the biggest opportunities is to counter the opioid epidemic sweeping the nation," he said, noting the primary use of medical cannabis as a pain treatment. 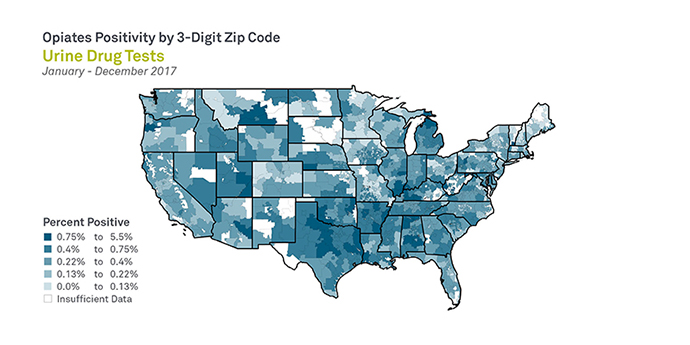 On the recreational side, "increases in positivity rates for marijuana in the general U.S. workforce were most striking in states that have enacted recreational use statues since 2016," Quest said. "Those states include: Nevada (43 percent), Massachusetts (14 percent) and California (11 percent). These three states also saw significant increases in marijuana positivity in federally-mandated, safety-sensitive workers: Nevada (39 percent), California (20 percent), and Massachusetts (11 percent). Federally-mandated, safety-sensitive workers include pilots, rail, bus and truck drivers, and workers in nuclear power plants, for whom routine drug testing is required by the DOT.

"These increases are similar to the increases we observed after recreational marijuana use statues were passed in Washington and Colorado," said Dr. Barry Sample of Quest Diagnostics. "While it is too early to tell if this is a trend, our data suggests that the recreational use of marijuana is spilling into the workforce, including among individuals most responsible for keeping our communities safe." 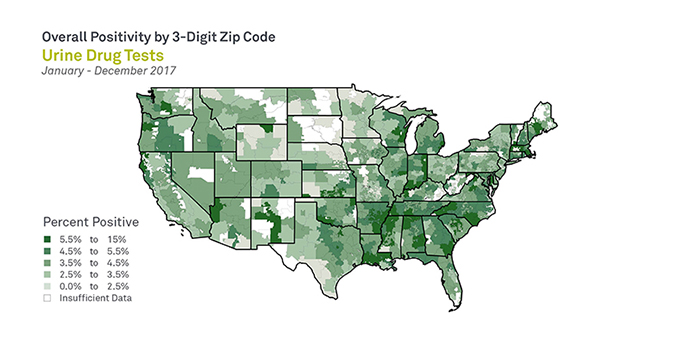