A new global corporate entity in animal health makes its home in Maine.

When’s the last time you heard about a global sciences company headquartered in Portland … Maine?

The East Coast’s Portland is so frequently overlooked that most media reports referring to that other Portland out west don’t even bother to specify it’s the one in Oregon. But the Maine metro area of just over half a million people was founded in 1786 — about 65 years before its eponymous twin in the Pacific Northwest. And it isn’t being ignored by newly formed animal health company Covetrus.

Approximately 1,200 of those positions will be at corporate headquarters in Portland, where Vets First Choice was headquartered. (Henry Schein is headquartered in Melville, New York.) A company fact sheet explains that Covetrus has 23,500 customers in the U.S., or 90 percent of U.S. veterinary practices, and boasted estimated annual revenue of more than $2 billion in North America in 2018. The company has 45,000 customers in Europe and more than 3,000 in Australia/New Zealand.

As for the growth opportunity ahead, “Based on industry analysts’ estimates, the global animal health market was in excess of $150 billion in 2017, with overall pet spending in the United States increasing approximately 4 percent,” says the company.

In a January presentation to the J.P. Morgan Chase Healthcare Conference, Benjamin Shaw noted that Vets First Choice employed around 850 people as of the end of 2018. The merger, in addition to providing a $1.1-billion dividend to Henry Schein, is expected to generate more than $100 million in revenue growth and operational synergies by the end of year three.

That answers the question “Why grow?” But why Portland, Maine?

You have to go back to September 2018, when Vets First Choice received city approval to commence construction of a new 170,000-sq.-ft. headquarters to support more than 1,500 employees, including a pharmacy facility, enhanced software and data science labs, and office space.

“We’re thrilled to announce this major expansion in Portland, Maine to support rapid growth, a new IT R&D effort and improved service to our northeast customers. We expect to add more than 1,000 new high-quality jobs in southern Maine and believe this downtown location will be critical towards attracting world-class talent,” said Benjamin Shaw, the co-founder and CEO of Vets First Choice who now serves as Covetrus president and CEO

Company leaders said they anticipated the project would serve as the corporate headquarters for the planned new company following official completion of the merger. So many of the assertions in that announcement still apply:

“The project will create hundreds of new professional jobs for Maine residents in areas like software development and pharmacy,” said Vets First Choice in September, noting that the firm “will be collaborating with the University of New England College of Pharmacy for residency, training and development programs.

“On behalf of the Vets First Choice organization, I want to express how exciting this is for us to build our new headquarters in downtown Portland,” said David Shaw, co-founder and chairman of the board of Vets First Choice. “I’ve been a part of the Portland business community for the past 30 years and I’ve watched our great city evolve and grow. With this new building we’re making it clear we plan to evolve and grow with the city.”

As the announcement explained, a large part of the project will be funded by the Maine Technology Asset Fund 2.0 (MTAF 2.0) in partnership with the Maine Technology Institute (MTI). VFC was awarded a $9-million grant toward the cost of this project, which will be completed in two phases, with the pharmacy and fulfillment centers expected completion in October 2019. The remainder of the project is expected to be complete by April 2020. The project was facilitated by Bateman Partners with CBRE | The Boulos Company, which represented Vets First Choice.

David Shaw — who founded IDEXX Laboratories in the area 35 years ago, serves as managing partner of Black Point Group and is the founding CEO and chair of critical care pharmaceutical company Ikaria — wants to spread the winning around. Concurrent with the public listing of Covetrus, he stepped forward as the sponsor of a new $25,000 prize for entrepreneurship that will be part of the Maine Center for Entrepreneurship’s Top Gun program designed to support the next generation of great Maine-based companies through pitch competitions held in five Maine cities.

“Entrepreneurial businesses are the engine of our economy - driving growth, innovation, and opportunity locally and across the world,” said Shaw. “I am pleased to join MCE in supporting the next generation of great Maine-based companies.” 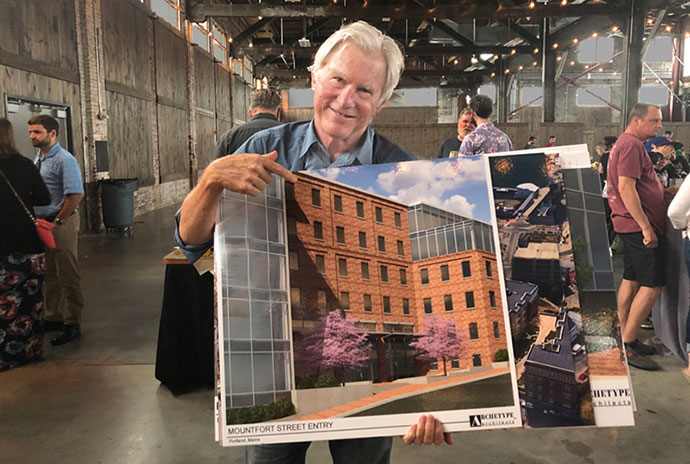 David Shaw in September couldn’t hide his enthusiasm for the new building approved by city officials. Conceived for Vets First Choice, it was planned to be the home base for the newly merged company after an agreed-upon merger with Henry Schein Animal Health.
Photo courtesy of Black Point Group