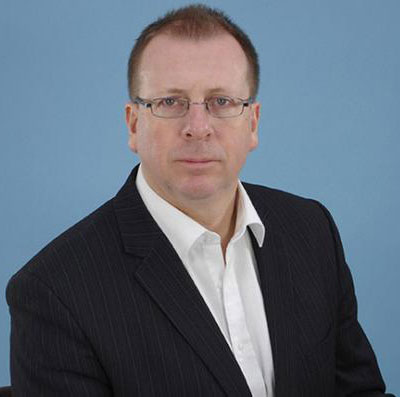 Jeremy Taylor is the gregarious CEO of Gatwick Diamond Business, a business advocacy organization with about 350 members.
by TREVOR WILLIAMS

Using a beat-up trombone purchased for £35 on eBay, the gregarious chief executive blasts a slurred call to order. The crowd cringes, but they can't help but smile and pay attention.

Perhaps unwittingly, Mr. Taylor's antics are a metaphor for the region he promotes and the airport that makes it attractive for global companies like Nestlé and Boeing Co., which have operations minutes from the terminals.

Overshadowed in recent years by Heathrow Airport, its rival to the northwest, Gatwick has taken to tooting its own horn as the United Kingdom enters a critical season of debates over how to meet a projected shortage of aviation capacity in the coming decades.

The U.K. government last November appointed an airports commission chaired by Sir Howard Davies to gather plans from airports and feedback from stakeholders with the goal of offering recommendations after parliamentary elections in 2015.

Gatwick, with only about half of Heathrow's 70 million annual passengers, is seizing this opportunity for a full-on offensive toward its larger competitor, which argues that adding a third (and possibly fourth) runway is the only way to ensure a hub airport in London.

"Because we're kind of the challenger, there's some energy and a sort of hunger for the business," Andy Lewis, head of marketing for Gatwick, told Global Atlanta in an interview at a Hilton hotel adjacent to the airport.

Before 2009, Gatwick was under British Airports Authority, the group that also owned Heathrow. That kept Gatwick, seen as a leisure airport, from getting the investment it needed to become more of a business hub. Now Gatwick feels in control of its destiny, which is starting to see as intertwined with the vibrant $19 billion economy that has sprung up within the Gatwick Diamond region.

Swiss food giant Nestlé last year moved 840 employees to a new U.K. and Ireland headquarters in a business park in Manor Royal, an area near the airport where 30,000 people work. The company has invested nearly £400 million around the United Kingdom in the last five years.

Thales, a defense contractor that makes aviation simulators, also in part relies on Gatwick, which itself employs more than 23,000 people within the airport fence. Virgin Atlantic's headquarters is close by (ironic considering Delta Air Lines just bought a 49 percent stake in the company to ensure more slots at Heathrow). Companies in biotech, pharmaceuticals, even food products like pasta, have set up nearby factories and offices.

Gatwick also boasts access to emerging markets in Asia and the Middle East. It has nonstop routes to China, Vietnam and Moscow, with a nonstop link with Jakarta, Indonesia, returning soon. Korean Air is also planning a comeback, while Emirates Airlines has been at Gatwick for 25 years.

While many of these links are a result of slot availability and London's overall magnetism, Mr. Taylor sees a real chance for the Gatwick Diamond to capitalize on the connections.

"I always think of Heathrow as a place you go through to get somewhere else; Gatwick is a destination of its own," Mr. Taylor said in an interview. "A plane flight is not enough …You have to have something to do when you get there."

That said, the airport itself has to run smoothly to support those businesses.

Ian Woodland of Assurity Consulting flies all over the U.K. and Europe helping other companies comply with national workforce regulations. He'd like to see Gatwick have more convenient commuter flights throughout the continent.

"We want to be flying out in the early morning and we want to be returning in the early evening. We've got consultants that go to Europe – their flights don't get back until 10:00 at night. It's too late. That's where we're constrained," he said.

By July, Gatwick will ask the airports commission for a second runway sometime after 2019. Key to making its case will be to highlight the airport's benefit to the region, which is already one of England's best developed areas.

Similarly, Hartsfield-Jackson Atlanta International Airport is working with stakeholders in an ongoing movement to ensure that communities surrounding Hartsfield better capitalize on the airport as a growth engine.

Led by the Atlanta Regional Commission, the recently formed Atlanta Aerotropolis Alliance aims to unite the area under one brand, allowing disparate jurisdictions to speak with one voice when vying for inbound investment projects.

"I always think of Heathrow as a place you go through to
get somewhere else; Gatwick is a destination of its own.

Porsche Cars North America Inc.'s decision to relocate to the Aerotropolis Atlanta site just off the airport grounds was seen as a watershed moment for the initiative, which will hinge on communities' ability to work together. So far things have been amicable, but a funding model hasn't yet been discussed in earnest, and it remains to be seen how actively corporate heavy-hitters will participate.

Atlanta-area leaders have explored Gatwick as a model. Although the British airport is much smaller, the area has had a head start on balancing competing local interests to project a cohesive brand.

The Gatwick Diamond Initiative was launched in 2004 as a way to unite the business community in what was not previously defined as an economic region.

It has run alongside other economic development initiatives like the Coast2Capital Partnership, one of 39 privately led "local enterprise partnerships" (LEPs) across the U.K. designated by the national government to spur more cooperative local development.

John Peel, a retired executive from Varian Medical Systems, a Silicon Valley-based software company with U.K. operations near Gatwick, decided there were "natural industrial corridors" that weren't benefiting from political bickering. He began toying with the idea of a diamond with the airport at the center, which stretched from the southern end of London down to Brighton and extended horizontally along the main east-west highways.

"The diamond was simply a shape with an icon to bring businesspeople together. Because it did no harm, it began to be accepted by the politicians, and then it appeared in the government's strategic plan as a name and suddenly was adopted, so we had to launch it," Mr. Peel laughed in an interview with Global Atlanta.

Before the diamond, councils in the counties of West Sussex and Surrey didn't talk with each other about economic issues, but that has started to change.

Mr. Taylor, who counts Mr. Peel as a mentor, even changed the name of his local development agency to Gatwick Diamond Business, a sort of chamber of commerce that remains a separate entity from the Gatwick Diamond Initiative. Just as the borders of the diamond were sufficiently "fuzzy" to be inclusive, so was the ability to use the name.

During an interview with Global Atlanta, Mr. Peel was hesitant to offer recommendations for Atlanta's airport, but he noted that an aerotropolis needs an influential backer who has clout but is still removed from politics.

"I would always go to one thing first: Is there anyone who has sufficient visibility who you might call a champion who would be willing to put their head above the parapet and get it shot off?" he asked, echoing the admonitions of Mr. Kasarda, the aerotropolis guru.

Mr. Peel might have been referring to unelected officials like himself, but those in the borough governments find themselves balancing the need for growth with the "not-in-my-backyard" attitudes of some of their constituents. Even if they can agree on the general path toward growth, negotiations on how it's distributed will inevitably ensue, said Garry Wall, a councilor in the Mid-Sussex District Council.

"if we're honest politically, we have to actually approach growth in a sensible, constrained, thought-out way, because that's the only way forward," Mr. Wall told Global Atlanta.

Simon Bland, business and community engagement manager for the borough of Reigate and Banstead, said some local governments have started to share more information and work more cooperatively.

At the same time, smaller towns face the prospect of losing their voices in the larger Local Enterprise Partnerships set up by the national government. That can be challenging, particularly considering that LEPs get national funding for infrastructure and planning.

The Gatwick Diamond initiative has been a way for smaller communities to make their voices heard by a diverse array of stakeholders.

"We don't see a LEP that's interested in us, so we have to do something collectively to have an identity because of that scaling up of structures," Mr. Bland said.

Mr. Taylor also believes the Diamond gives local companies a voice. At the networking meeting, he solicited feedback about the airport's plans to ask for a second runway, welcoming even dissenting views.

In an echo of Atlanta's current efforts to craft an export plan based on its international assets, Gatwick also plans to survey local businesses about their international expansion plans, providing that information to airport officials to help them make case for more carriers and routes. He also plans to use Gatwick's connectivity to open doors for companies in emerging markets.

"It's actually not about saying we can go to Jakarta; it's a population of 250 million, some of whom are quite rich … It's also the fact that British manufacturing, British services, British skills, British abilities, are actually quite highly regarded," he said.