A $75-billion dream for a transport megahub could carry the
United Kingdom into the future. Will reality keep it earthbound? 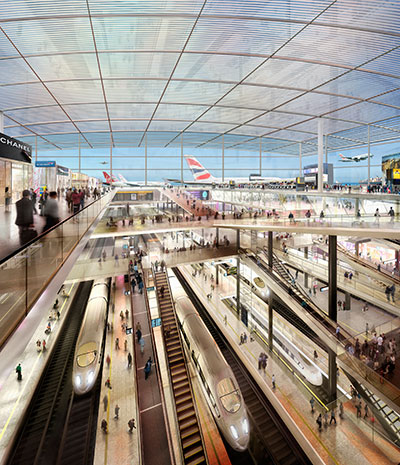 These renderings depict the vision of the $75-billion Thames Hub proposal, expected to be submitted formally to the UK Airports Commission by July.
Image courtesy of Foster + Partners

he Isle of Grain, located in the Hoo district of Kent at the confluence of the Medway and Thames rivers, is home to, among other things, an LNG terminal, old fortifications from World War I, and, not far away, a sunken World War II ship loaded with munitions, a familiar navigation hazard that it would cost some $40 million to disarm.

To some, such history might deem the place a suspect location for a global multimodal air, rail, freight and energy logistics hub. But to a visionary such as architect Lord Norman Foster, founder of Foster + Partners, it's the perfect place to locate the proposed self-funded Thames Hub, a concept first aired in 2011 that offers what the firm calls "a unique opportunity for an integrated infrastructure solution to rebalance the economy, stimulate growth and enable the UK to maintain its global hub status."

A separate proposal from London Mayor Boris Johnson involves the Shivering Sands area, and has come to be known as the "Boris Island" proposal. But the region it's planned for was designated a wildlife haven by the UK government in early 2012.

The idea of an estuary hub, whether from Foster or others, has spawned comments ranging from Prime Minister David Cameron's reserved "We should examine the case for an estuary airport" to Ryanair CEO Michael O'Leary's "It's absolutely nuts."

Earlier this month, the team of Foster + Partners and Halcrow (a CH2M Hill company) confirmed to the Airports Commission, the organization led by Sir Howard Davies investigating airport capacity in the UK, that it intends to submit a proposal to the Commission in July for a new hub airport in the Thames Estuary.

The UK government in November launched the Airports Commission, which has to report by the end of this year on its "assessment of the evidence on the nature, scale and timing of the steps needed to maintain the UK's global hub status" and "its recommendation(s) for immediate actions to improve the use of existing runway capacity in the next five years — consistent with credible long term options." By summer 2015, it has to report on its assessment of the options for meeting the UK's international connectivity needs, including their economic, social and environmental impact; its recommendation(s) for the optimum approach to meeting any needs; and its recommendation(s) for ensuring that the need is met as expeditiously as practicable within the required timescale.

"Decisive action must be taken in planning for future capacity if Britain is to remain competitive," said Lord Foster this month. "We believe that a new four-runway Thames Estuary airport can best provide the connectivity and future flexibility that Britain desperately needs, while improving the lives of the millions of Londoners blighted by Heathrow's flight path."

Supported by a bevy of professional experts and consultation with more than 100 stakeholders, the Thames Hub would only take 16 years to build, say proponents, who submit that the airport alone would take just two more years to build than the touted third runway at Heathrow, a proposal that's been denied in the past but continues to resurface, despite political obstacles to its fruition.

The Thames Hub has continued to evolve since its 2011 debut. Among its components:

The new airport "will largely eliminate the environmental, noise and security problems of aircraft over-flying London into Heathrow," says press material from Foster + Partners and Halcrow. Various infrastructure improvements would require another £4 billion (US$6 billion). 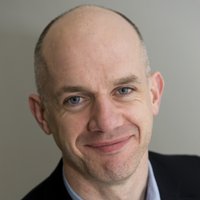 The Foster + Partners and Halcrow Thames Hub vision is supported by economist Bridget Rosewell, chairman of Volterra Consulting and founder member of The Thames Estuary Research and Development Company (TESTRAD), and by Douglas Oakervee, former chairman of CrossRail, who led the construction of Hong Kong's new Chek Lap Kok airport on reclaimed land and was a founder member of TESTRAD.

"Eventually we have to come down from the dreams and wonderfully rendered drawings," he says, and ask, "Would this ever happen?"

"It's a spectacular proposal as it is, because it proposes to link a hub airport and a rail network, and it shows the connections to the seaports," says Chapman, an engineer by training who admits to a weakness for ambitious/audacious plans. "It builds on a lot of things historically part of the culture of the United Kingdom. But the UK doesn't really do what the French would call le grand projet. The streets of London are still higgledy-piggledy, and almost on the same lines of a medieval city. There will be a huge challenge in getting the political will to do a project of this scale … and to do so in a commercially viable way."

Bringing what Chapman calls "the bright light of reality" to major megaprojects is one of the missions of the Major Programmes Management program, says Chapman. And the history of transport megaprojects is not punctuated by efficiency. 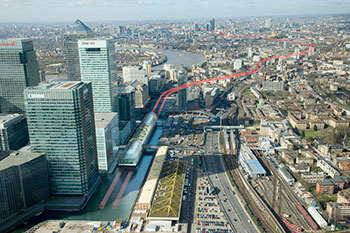 Among active major projects in the UK is Crossrail, a £16-billion scheme to provide a new east-west railway across London, providing a dedicated link between Heathrow Airport, the West End, the City, Canary Wharf and the Thames Gateway. Among the project team members is Halcrow, which is also championing the Thames Hub proposal. Crossrail, whose Canary Wharf station is rendered here, is expected to increase London’s public transport network capacity by 10 percent when it opens in 2017.
Image courtesy of Halcrow

"Generally for transport infrastructure, the costs spiral substantially above original estimates," he says. "The timelines take longer, so funding has to be stretched. And the revenues are generally much less than projected. From the private sector point of view, big infrastructure tends to not be a good investment."

That said, he does offer a shout-out to the Kansai International Airport near Kobe, Japan, which links regional rail with Kobe-area infrastructure. But the Thames Hub project, in incorporating everything from flood protection to green energy generation to catalyzing an island nation's economy, might be so grand as to be leaning toward grandiose.

Each component of the plan is challenging enough, says Chapman, without having to bring them to convergence in the right way and on the right timeline.

"With project delivery, as scale goes up, challenges and risks do not go up in linear fashion, but exponentially," he explains. "It introduces many more risks, particularly around the commercial viability of the proposal."

Now is the Time to Get a Grip

Another challenge is integrating the role of the UK government, he says, from transport to energy to environment and climate change. As Chapman spoke, the UK's Lord Browne, the government's chief non-executive, was releasing a report this week entitled, "Getting a Grip: How to Improve Major Project Execution and Control in Government." The headline in The Guardian: "Management of Major Projects Worryingly Poor." Less than a third of major projects, Browne's research found, ahve been delivered on time and on budget.

In a statement earlier today in response to the report, the Cabinet office and Treasury department said, "Britain is in a global race for the jobs and opportunities of the future. To succeed it is vital that our major investments in Britain’s infrastructure and services pay off ... this government will not tolerate such poor delivery and has already made real progress tackling long standing weaknesses. We launched The Major Projects Authority (MPA) in 2011 with unprecedented power to intervene in failing projects and support Treasury approval processes. We have also introduced world-class training for project leaders. At Budget we announced the creation of a central pool of commercial infrastructure specialists and the establishment of tough new Infrastructure Capacity Plans to drive forward progress in key government departments. But we are determined to go further. That’s why we asked Lord Browne to examine how best practice from the private sector can be applied to government. We will carefully consider Lord Browne’s recommendations; further announcements will be made in due course."

"Having the capability in government to regulate, guide and support a project like this is not easy," says Chapman.

Even with a "bit of a legacy" in the UK now with the successful delivery of the 2012 London Olympic Games, as well as the ongoing Crossrail project in London, he says, finding the right people to run the program would also be a challenge, notwithstanding the graduates his program seeks to produce. On the other hand, he says, there's an opportunity:

"Bringing the best and the brightest from around the world is never a bad thing," he says. "But if this is a project with a strong national identity to it, a legacy issue is developing the capability of people in the UK to deliver big projects." Like the Olympic Games, he says, the ideal would be to "leave a legacy of capability, not just have a big party."

Other air traffic capacity expansion proposals in the UK have included a mega-airport near Rugby, approximately one hour north of London and one hour south of Manchester. "It was put forward in a reasonably serious way, but it drifted and faded," says Chapman. Meanwhile, serious investment at Heathrow continues, most recently with the opening of Terminal Five. Those examples sound a note of caution. But he understands those who are growing tired of caution.

"The world of big projects is a fascinating one," says Chapman, whose school just hosted SpaceX founder Elon Musk a few months ago. "His angle is 'It's a commercial organization.' To do it economically is not easy. It has to have discipline about it."

Chapman finds projects such as Thames Hub genuinely inspiring, even speaking from the multiple perspectives of engineer, major project expert and boyhood dreamer. "But the grownup version is, 'Can it be done in a commercially viable way. It's a different skill altogether."

Lord Foster thinks the skill is there, waiting to be exploited in order to foster even more skills and more synergy.

"We believe that the economic case for the Thames Hub is compelling as Britain is already losing out to expanding European hubs," he said in January. "Our proposal comprehensively addresses the infrastructure needed to maximize the advantages of a new airport. The Thames Hub and proposed new airport project is part of a wider UK-wide initiative to bring together rail, freight logistics, aviation, energy generation and transmission, flood protection and regional development. It will shift more movement of goods to rail and reduce congestion on our road systems. Recognizing the synergies between these different strands, it reaps many benefits and economies from their integration." 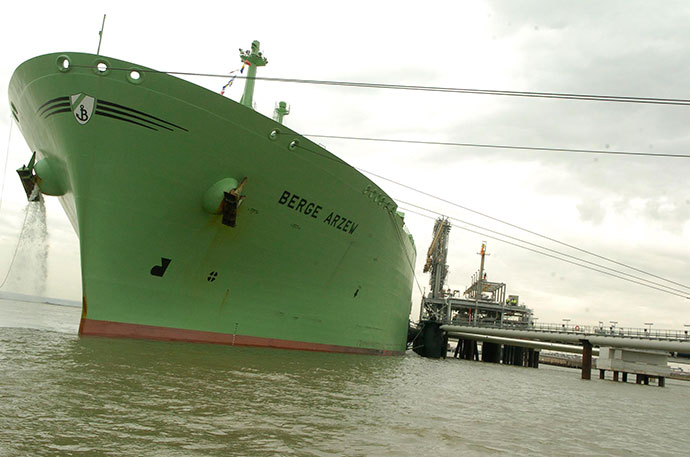 National Grid Grain LNG owns and operates the UK's first modern LNG importation terminal (pictured) on Isle of Grain. As with the grand Thames Hub proposal, this operation boasts optimum transport proximity, "close to the major ports and road networks in South East England and in close proximity to the proposed 'Blue Corridor' routes, which are intended to support LNG fuelled HGV fleets across Europe."
Photo courtesy of National Grid