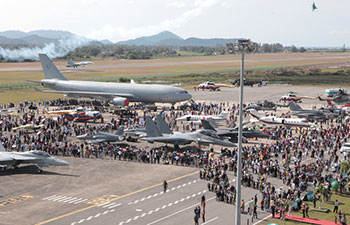 New players in a rapidly growing region are staking their claim to aerospace industry capital investment. 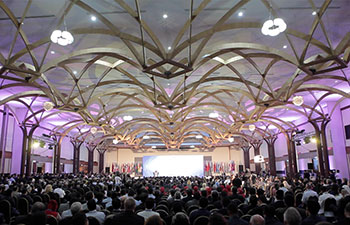 The Langkawi International Maritime and Aerospace Exhibition is taking place this week at the Mahsuri International Exhibition Centre in Malaysia. The conference in 2011 attracted 400 companies and some 150,000 visitors.
Photos courtesy of LIMA

here is nothing like new competition to keep a player on his game. And there are new kids on the aviation services block in Southeast Asia that other contenders in the region will want to keep an eye on.

Indonesia is building its aviation sector and is likely to become a stronger contender in this sector, noted site consultants at the just-concluded Global Free Trade & Special Economic Zone Exhibition & Summit in Kuala Lumpur, Malaysia. And Thailand intends to become a full-service aviation hub, according to its Board of Investment, with its new Bangkok Suvarnabhumi International Airport (September 2006) a key plank in the platform.

Thailand borders Malaysia, which is also cultivating an aerospace cluster. It's on a list of target industries there deemed by the government to be "high value added, high technology, knowledge intensive and innovation-based."

The two may end up simply complementing each other, as Malaysia seems interested in a higher-end sector that will eventually include more R&D and already sees companies like Strand Aerospace (Malaysia) Sdn Bhd training engineers for aerospace-related enterprises. Thailand wants to provide aircraft maintenance repair and overhaul (MRO) services and serve as a training center for regional pilots and air crew. Boeing predicts a market of more than 8,900 new passenger aircraft through 2028 in the Asia-Pacific region, so those crews will come in handy.

Thailand's current aviation sector is about air transportation services for passengers and cargo and ground-support activities, such as refueling, catering, repair and maintenance. Bangkok Suvarnabhumi International Airport was ranked the world 13th busiest by passenger traffic in 2012 (up from 16th in 2011) and the world 20th busiest by cargo traffic in 2010. The Thai government plans to expand the second phase of Suvarnabhumi Airport to support increases in passenger traffic that already exceed its existing capacity of 45 million passengers per year. The expansion will allow a capacity of 80 million passengers by 2019.

Regarding aircraft repair and maintenance, Transport Minister Chadchart Sittipunt has assigned the Department of Civil Aviation to conduct a study on making Nakhon Ratchasima Airport northeast of Bangkok a new aircraft repair and maintenance and service center. Training for personnel supporting the aviation industry is undertaken by Thailand's Civil Aviation Training Center (CATC). CATC supplies the Thai aviation industry with qualified personnel for the ground support, repair and maintenance of aircraft as well as pilot training programs for airplanes and helicopter. Thailand's national airline, Thai Airways, was recently negotiating a plan with Airbus to build a corporate training center at the carrier's main facility.

In line with the government policy to make Thailand a full-service aviation hub, the BOI promotes the manufacture, repair or conversion of aircraft, including aircraft parts and equipment. These activities are classified as a priority activity of special importance and benefit to the country, according to the Board, which means that projects in the aircraft maintenance industry are eligible for exemption of import duties on machinery and an eight-year corporate income tax exemption.

Malaysia's aerospace manufacturing sector, meanwhile, is one of the country's fastest growing industries, according to the Malaysian Industry-Government Group for High Technology (MIGHT). In 2012, it recorded more than RM2.5 billion (US$896 million) of turnover and employed approximately 5,100 workers. The sector is home to numerous Tier 2 suppliers to Boeing, Airbus and others and is becoming increasingly known for its resident composites expertise. Recent investments from Spirit AeroSystems, CTRM, ACM and Upeca helped the aero-structure manufacturing sub-sector record 100-percent growth in turnover from RM0.6 billion in 2009 to RM1.2 billion in 2011, according to MIGHT.

Malaysia's aerospace industry was on display this week on the island of Langkawi off the country's northwest coast, which hosted the Langkawi International Maritime and Aerospace (LIMA) exhibition. Prime Minister Datuk Seri Najib Razak noted at opening ceremonies that Malaysia "has pushed aviation to the center of our industrial policy."

Among other measures, the government is investing in aerospace training programs organized and conducted by private industry, including Strand Aerospace (Malaysia) Sdn Bhd, based in Cyberjaya, an engineering company that provides analysis of aircraft structural components to Airbus and other aircraft manufacturers and is a growing employer of Malaysia's engineering talent.

The following is an excerpt from the September 2012 Site Selection Malaysia Investment Profile, "How Did Malaysia Do That?" making the case that this Southeast Asian nation intends to separate itself from other markets in the region with higher-end aerospace goals: 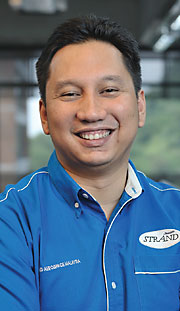 The company began operations in 2006 – Strand had 500 to 1,000 responses to each advertisement placed for new hires, says Naguib Mohd Nor, Strand Aerospace's chief operating officer.

"Malaysia produces about 50,000 engineering graduates from its local universities each year," he explains, "about 30 percent of whom are mechanical engineers." Many were not applying their expertise due to a lack of openings. But Strand and others seek engineers with more than just a degree – they require critical thinking skills and leadership capability and an appreciation of ethics – of doing something right, not just on time. Strand built an in-house training program to cultivate these qualities in its engineering staff, says Naguib. "We worked on how they were thinking, but we also gave them an environment where that thinking can thrive. We gave them responsibility but also provided strong support."

Other aerospace companies took notice of Strand Aerospace's engineers, and sent their hires to Strand for training. The program has since been adopted by the government as a way of accelerating the development of Malaysia's engineering community. "It's the added-value thinking that was missing in different industries, such as oil and gas, preventing their migration to a more services-oriented focus from a commodity basis," as called for in Malaysia's Economic Transformation Program, explains Naguib.

Strand and two other companies have been working with the government, which provides training grants and funding for IT, since 2010 to cultivate a new generation of engineering talent. Aerospace trainees now are largely hired by Strand, but other companies will benefit from the initiative starting next year. "The idea is that after 2013, Malaysia will know how this industry works, how to supply the right manpower to industry, and will be an option to high-end engineers working in other countries. Malaysia will play a very important role in the coming years – it is English speaking, but people also speak all the languages of the region. We can target areas that will take the rest of the region some time to catch up on."

Companies will notice this new supply of high-end engineering talent that Naguib is helping put in place, which will put Malaysia's aerospace industry on the fast track in due course. Companies in other industries benefit from Ministry of Human Resources funding, particularly strategic industries, so aerospace is not an island in this respect. "But it is an ecosystem that needs to be built," says Naguib. "Aerospace in Malaysia is a foregone conclusion. We have so much momentum and a 25-year history in aerospace composites, which is a huge part of the manufacturing of the latest aircraft. Malaysia is a key place to develop your manufacturing capability from a base that is already established. The maintenance side is here, and the R&D capability is now growing, too."

This industry growth is critical for two reasons – to meet Economic Transformation Plan targets for high-income industry sectors by 2020 and to be a player in the global aerospace industry's next supply chain iteration, which will include Southeast Asia. "We must be clear about what Malaysia is doing in order to be a part of that," says Naguib, adding that the country's aerospace sector is of a single mind about the importance of this. "We have everything to lose."