West Star is a beacon for an industry niche on the rise. 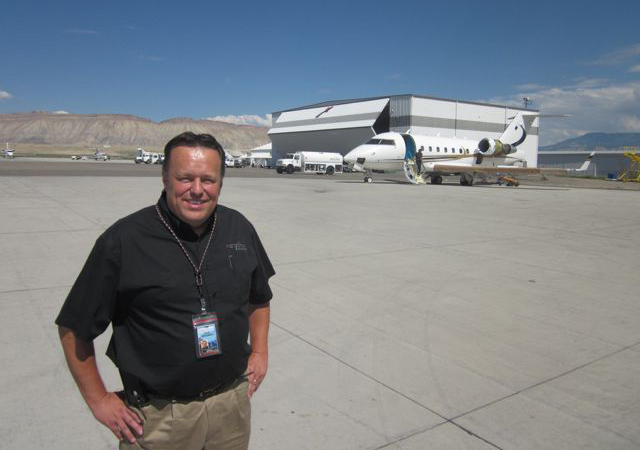 Dave Krogman sees a bright future ahead for West Star in Grand Junction, Colo., where the company is expanding on a campus that already occupies eight buildings totaling over 120,000 sq. ft. of office and hangar space on approximately 32 acres.
by ADAM BRUNS
I 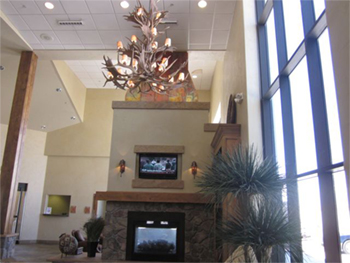 The West Star reception area in Grand Junction might convince pilots and aircraft owners they've arrived at a lodge.

"2013 promises to be a very busy year for us," CEO Robert Rasberry said in May.

The company offers everything from fuel and ramp services to repairs, maintenance, major airframe modifications, pre-buy inspections and paint. Plans call for adding approximately 160,000 square feet at West Star's two largest locations (in Grand Junction and East Alton) and at its location in Columbia. All facilities will be new with the exception of the maintenance facility in Grand Junction. That facility will be housed in a hangar that previously belonged to Mesa Airlines.

The facility in Columbia, SC, is poised for added capabilities with the addition of 10,000 sq. ft. of maintenance facilities.

Not all sites are expanding: West Star's location in Chesterfield, Mo. (SUS, or Spirit of St. Louis Airport) will continue to provide avionics and line service, with other services moving across the Mississippi River to East Alton. And to focus resources for maximum customer benefit, West Star will sell its small MRO facility in Dallas, Texas (DAL), to Waypoint Holding.

Meanwhile, out west, things couldn't be brighter. After all, Grand Junction Regional Airport does boast 346 VFR days (visual flight rules, where the weather is clear enough for the pilot to see where he's going) with visibility better than 20 miles and ceilings of 5,000 ft.

" We're working with the Grand Junction Economic Partnership, the airport board and the city to build a facility that will allow us to grow with the evolution of corporate flying."
— Dave Krogman, General Manager, West Star Aviation GJT

As West Star notes, Grand Junction has "virtually no air or ground congestion," even as businesses such as FedEx, West Star and POMA Leitner (a maker of ski lifts and related machines and gondolas) expand in the environs of Grand Junction Regional Airport. Not far from West Star's growing complex sits Lewis Engineering, a spinoff of Hamilton Sundstrand that makes jet parts and has secured its share of DoD contracts. Among other honors, the company's site in Grand Junction was where Gov. John Hickenlooper chose to announce his Colorado Blueprint for Economic Development

In addition to offering complete fueling support services, West Star Aviation GJT specializes in business aircraft maintenance, modifications, and refurbishment for aircraft ranging in size from turboprop to long-range business jets. West Star plans to expand the existing hangar at GJT, which will be utilized for maintenance and storage. Storage during the winter months is extremely important to support heavy aircraft traffic into the ski resort areas.

According to the Grand Junction Economic Partnership, the expansion includes building an $8-million, 45,500-sq.-ft. hangar and the lease of an additional 48,900 sq. ft. of existing airport space. This project will add 150 new, primary jobs over the course of the next several years to the current payroll of approximately 350.

GJEP, led by Executive Director Kelly Flenniken, began working with West Star nearly one year ago to determine the potential impacts the project could have in the community, said a recent GJEP newsletter, noting "innovative economic development and public-private partnerships with the Airport Authority, the Colorado Aeronautical Board and West Star." Aviation/aerospace is among the area's target industries, along with energy, healthcare/medical, IT and the outdoor recreation industry.

The new building will be about the size of the company's Bombardier hangar, and dedicated to large craft paint jobs. The market is evolving from small business planes, says Dave Krogman, general manager, during a tour of the West Star facilities earlier this month. "People want to travel the world, not just the United States," he says. "We're working with the Grand Junction Economic Partnership, the airport board and the city to build a facility that will allow us to grow with the evolution of corporate flying."

Smaller jets are still an important part of business. But these days, a Lear 35 jet that sold for $3 million just three years ago can be had for a paltry $625,000. So companies have made the move to larger planes with greater reach. Once clients are writing checks in that range, expenses aren't necessarily spared on the fit-out. Veneers for cabinetry can run as high as $400 per sq. ft. A complete paint, inventory and maintenance routine can take up to 10 weeks. And the facility runs full steam all but six hours every day.

The recent FedEx hub expansion at the airport was well timed for West Star's own growth.

"We're one of the largest FedEx users in town," says Krogman. "It's good to have a FedEx hub here. This is a business that's about time. We're always in urgent mode to get the plane back in the air."

Krogman says the company tends to hire locally and train on-site, citing the recent hire of a cabinetmaker in Aspeny. The facility has its share of ex-military personnel, he notes. And Redstone College in Denver cranks out aviation technicians. The company works with the local school district as well, including some apprentices.

West Star's growth comes as the City of Grand Junction this summer passed a sales tax exemption for aviation and aerospace businesses that extends a 2010 policy for another three years.

"Continuation of this exemption will allow Grand Junction's MRO facilities to remain competitive with MRO facilities located in other municipalities and states with such tax exemptions already in place," said David Ulane, Northwest Mountain Regional Manager for the Aircraft Owners and Pilots Association (AOPA), in a letter to the city earlier this summer. "Aircraft are highly mobile assets, and this extension will permit Grand Junction's MRO facilities to continue to attract valuable aircraft maintenance work from across the country. This in turn can create new skilled, family-sustaining aircraft maintenance jobs and much-needed additional economic development for the City of Grand Junction and Colorado's western slope."

The exemption allows for sales and use tax exemptions for parts that are permanently affixed to or attached, by the seller, as a component part of an aircraft. "This is a necessary ordinance in order for aviation companies to remain competitive in this industry, as owners of aircraft have great flexibility in where they can repair, restore or refurbish their airplanes," said GJEP. "This exemption is consistent with the state of Colorado and many other states all competing for growth in the aviation sector."

Krogman says the city exemption fits nicely with the State of Colorado's aircraft manufacturer tax credit of $1,200 per new employee for those companies located in a Colorado aviation development zone (ADZ). The credit is available for tax years beginning on or after January 1, 2006. The credit was set to expire January 1, 2017, but was reauthorized and expanded to encompass aviation maintenance, repair, and overhaul (MRO) businesses and signed into law by Gov. Hickenlooper late this summer. It is set to expire at the end of 2022.

Simon Fox, financial & program manager for the Colorado Office of Economic Development and International Trade (OEDIT), says any FAA-recognized airport is eligible to become an Aviation Development Zone. All they have to do is sign a quick one-page application. To date just 10 of the state's 49 eligible airports have become ADZs: Denver International, Centennial, Front Range and Jeffco in the Denver area; Fort Collins-Loveland Municipal in that currently flood-beleaguered area; Walker Field (Grand Junction Regional Airport) in Grand Junction; Greeley Weld County; Stevens Field in Pagosa Springs; Pueblo Memorial; and Erie Municipal Airport in the hot oil and gas territory of Weld.

According to the AOPA, MRO businesses safely maintain a fleet of more than 220,000 aircraft nationwide, including nearly 7,700 in Colorado. "Those aircraft are the backbone of a Colorado industry that generates nearly 341,000 jobs with an annual payroll of $11.2 billion," says the AOPA, "producing a total economic impact of $32.2 billion."

A search of the Colorado OEDIT's industry database shows 3,771 aerospace-related companies in the state. A search of Site Selection's New Plant Database shows recent MRO expansions across the United States from such firms as Aero-Mark in Fairhope, Ala.; Kalitta Air in Oscoda, Mich.; Sikorsky in Altus, Okla. (helicopters); BP Aerospace in Irving, Texas; Support Systems in Andalusia, Ala.; and N3 Engine Overhaul Services in Arnstadt, Germany.

Related growth is coming from Nextant Aerospace, which makes the world's only remanufactured business jet, the Nextant 400 XT, at its headquarters in Cleveland, Ohio. A release from that company this April aligned with the global reach and vision of West Star, noting that the entry-level business jet market in Asia has grown rapidly over the last decade with the five years to 2012 seeing a 74-percent increase in deliveries on the previous five year period (2003-2007). Globally, deliveries of business jets grew by just 6 percent between the same two periods.

Such growth figures to be a boon to regional airports looking for an industry niche to support. The National Air Transportation Association (NATA) represents some 2,000 companies such as fixed base operators, charter providers, maintenance and repair organizations, flight training, airline service companies and aircraft management companies, including those supporting fractional shareholders. According to its research, US general aviation contributes more than $150 billion annually in economic activity and supports more than 1.2 million jobs.

Across the country, there are over 5,000 airports of which only 500 have commercial airline service. According to the General Aviation Manufacturers Association, there are over 360,000 general aviation aircraft worldwide, ranging from two-seat training aircraft to intercontinental business jets flying today. Sixty-two percent of them (223,000) are based in the United States. 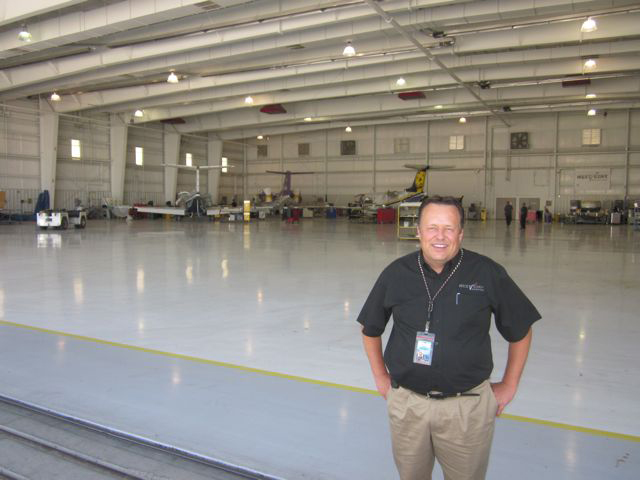 THAT WAS EPIC: A rollicking weekend of mountain biking and more on Colorado's Western Slope is only the trailhead for a national expansion. (Sep 12, 2013)