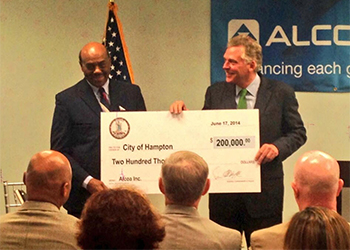 Alcoa is expanding in Virginia to capture demand for next-generation aircraft engine parts. The company is investing $25 million at its Alcoa Power and Propulsion facility in Hampton to scale-up a breakthrough process technology that cuts the weight of its highest-volume jet engine blades by 20 percent and significantly improves aerodynamic performance.

"We are deploying a state-of-the-art technology that will significantly improve the performance of some of the best-selling jet engines in the world," said Alcoa Chairman and CEO Klaus Kleinfeld. "This technology and investment further demonstrate how Alcoa is executing on our strategy to aggressively capture demand in the fast-growing aerospace market."

Alcoa will add equipment for a new production line and modify existing machinery at the Hampton facility to produce the blades. It will use the latest in advanced manufacturing technology such as robotics and digital x-ray for enhanced product inspection. The expansion began in June and is expected to be complete by the fourth quarter of 2015. Alcoa expects to add at least 75 new, full-time employees over three years.

Alcoa developed its process technology, called enhanced equiax (EEQ) casting, following five years of research and development at the Alcoa Power and Propulsion Research Center in Whitehall, Mich. The Alcoa Technical Center, the world's largest light metals research and development center based outside of Pittsburgh, Pa., also supported this work. Made primarily using nickel-based superalloys, the lighter and more aerodynamically efficient blades can be used to retrofit existing or build next-generation aircraft engines, such as the latest engines for large commercial aircraft, including narrow- and wide-body airplanes. Engines for narrow-body aircraft are among the top selling jet engines in the world. Alcoa will receive approximately $2 million in state and local incentives and an additional $1.3 million exemption on sales and use tax for selecting Hampton, Virginia for this investment.

Alcoa's Hampton facility currently employs 650 people who operate two production lines that produce turbine blades for the power generation market and large nickel and titanium structural castings for aerospace engines. In addition, the Alcoa Fastening Systems business has a sales office in Leesburg and Alcoa's Building and Construction Systems business has a drafting and engineering support office in Harrisonburg.

In May, Alcoa broke ground on its state-of-the-art, $100-million aerospace expansion in La Porte, Ind., where it will produce nickel-based superalloy jet engine parts, creating 329 jobs by 2019. The new 320,000-sq.-ft. (29,700-sq.-m.) facility will expand Alcoa's reach from structural engine components for business and regional jets to large commercial aircraft, including narrow- and wide-body and military airplanes. Engines for narrow-body aircraft are among the top selling jet engines in the world.

The plant will increase Alcoa's capacity to supply engines for narrow-body aircraft and enable it to produce parts nearly 60 percent larger than components it makes today, expanding its market reach to wide-body airplanes. These components are used in the compression and hot sections of the engine.

Construction of the plant is under way and is expected to be complete by the fourth quarter of 2015. Customer contracts underpin the new capacity. The facility will use the latest in high-tech advanced manufacturing equipment, including digital x-ray for real-time quality assurance, 3D printing of prototypes, blue light technology for more comprehensive dimensional inspection data, and automated casting furnaces with advanced controls to meet precise product specifications.

The Indiana Economic Development Corporation offered Alcoa up to $4 million in conditional tax credits based on the company's job creation plans. In addition, the city of La Porte has approved tax incentives worth $7.1 million over a 10-year period.

This is the second major aerospace investment by Alcoa in Indiana in two years. In 2012, Alcoa announced construction of a $90-million, greenfield state-of-the-art aluminum lithium facility at its Lafayette operations. The facility is on schedule to open later this year and will be capable of producing upwards of 20,000 metric tons of Alcoa's patented aluminum-lithium alloys used to build dramatically lighter and lower-cost airplanes versus composite alternatives.

SES to create 450 jobs with expansion of Huntsville operations

Science and Engineering Services LLC (SES) plans to add 450 jobs in Huntsville over the next five years as part of a nearly $70-million expansion of its Alabama manufacturing operations. SES officials made the announcement at the Farnborough International Air Show after a meeting with Alabama Governor Robert Bentley, Commerce Secretary Greg Canfield, Huntsville leaders and local economic development team members.

Columbia, Md.-based SES is a leading provider of maintenance, repair and overhaul services for airplanes, helicopters, unmanned aerial vehicles and ground combat systems. Key customers include the U.S. Department of Defense, the Department of Homeland Security and international governments.

"We are very excited about the expansion of our SES facilities and projected employment growth for Huntsville, Madison County and North Alabama," said SES Chief Executive Officer E.J. Sinclair, who said assistance from state officials, Huntsville Mayor Tommy Battle, the Madison County Commission, TVA, Huntsville Utilities, and the Chamber of Commerce of Huntsville/Madison County made the project possible.

"SES will continue to provide great support to our current customers, but we will also be bringing in some new key programs supporting the Department of Defense, aircraft original equipment manufacturers (OEMs), and foreign military customers," Sinclair added.

"The announcement of SES is great news for Huntsville and the entire state," Gov. Robert Bentley said. "We have positioned ourselves to be a leader in aerospace and aviation, and the SES expansion is further proof of that success. I appreciate the leaders at Science and Engineering Services LLC for the investment in Alabama, and I look forward to the company's continued success in Huntsville."

Once the expansion is complete, SES will occupy more than 1.3 million sq. ft. (125,970 sq. m.) of hangar, manufacturing, and integration space combined through four facilities in Huntsville. The company currently has 750 employees in the city.

"Huntsville remains a strategic hub in the aviation industry, and SES is proud to be a part of this community," said SES Senior Vice President for Aviation Derek Paquette. "We continue to see growth in our core mission areas and are pleased to be a part of the program successes of our many important customers. The expansion of our facilities and capabilities will allow us to even better support our customers and, ultimately, the young men and women who fly, drive, or operate the products we develop."

Commerce Secretary Canfield said the SES expansion project is moving forward because the company has confidence that it can assemble a skilled workforce in Alabama. "The capabilities of Alabama aerospace workers are so broad-ranging that our workforce can design, engineer, and manufacture just about everything that flies," he said.

"We are excited to expand into the Charleston region and believe our new site will create value to our largest customers by providing products just in time and point of use," noted Jerry Goodwin, CEO of Senior Aerospace - Aerostructures. "We are proud to be part of the growing Charleston aerospace industry and believe the local talented workforce will help us achieve our long-term strategic goals."

Senior Aerospace AMT plans to have the site operational by the end of 2014 with new positions to be filled immediately. The company is coordinating with readySC to create a pre-employment training program to begin filling job vacancies. The Coordinating Council for Economic Development approved job development credits for the project.

The Beacon Council announced on June 4th the expansion of LAN Cargo, the creation of 300 new jobs and $15 million in new capital investment within five years. LAN Cargo is building a new maintenance hangar facility at Miami International Airport.

The Beacon Council assisted the company with state incentives including the Economic Development Transportation Fund and Quick Response Training.

"We congratulate LAN Cargo on its new facility and commend all the groups involved in the effort to keep the jobs here," said Larry K. Williams, president & CEO of The Beacon Council. "LAN Cargo is a longtime employer in our community, so we are especially proud that they have chosen to continue to invest in Miami-Dade County."

The Miami-Dade Aviation Department was also instrumental in bringing the new facility to Miami.

"MIA has enjoyed a strong business relationship with LATAM Airlines Group and its affiliates for many years, so we're thrilled they have chosen to build their very first U.S. maintenance hangar facility at our airport," Miami-Dade Aviation Director Emilio T. González said. "This project is a major economic enhancement for MIA and Miami-Dade County as a whole, with $15 million in capital investment and hundreds of jobs generated."

Amerijet International's new coast-to-coast freight service operations took off at Rickenbacker International Airport, in Columbus, Ohio, on July 8. Rickenbacker is one of two key air cargo hubs for this new service; Reno, Nev., serves as the West Coast hub for this service. The inaugural freight-carrying flight out of Rickenbacker was honored with a ceremonial water cannon salute.

Rickenbacker's location, within a one-day truck drive to nearly 50 percent of the U.S. population, makes it an ideal selection for this new service.

"Rickenbacker is well-equipped and perfectly positioned to meet Amerijet's needs as a key hub for this service and we look forward to building a strong, successful partnership with them," said Elaine Roberts, President & CEO of Columbus Regional Airport Authority, which operates Rickenbacker.