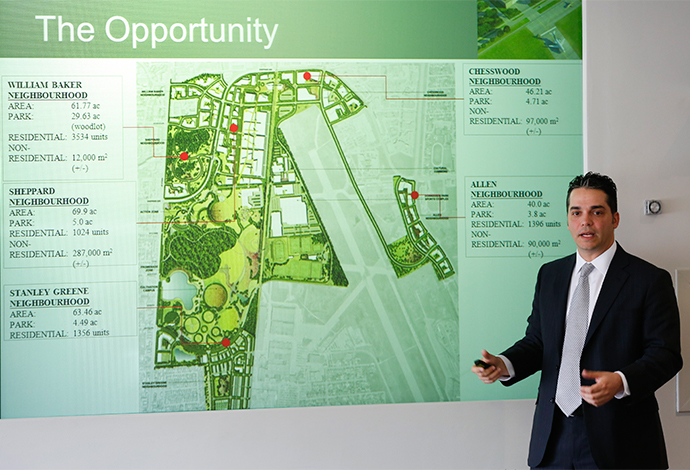 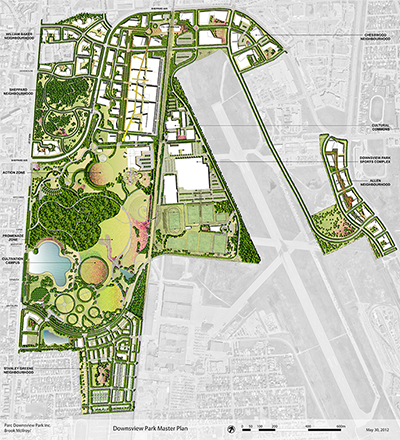 The plans for the DAIR research hub at Downsview Park include renovation of the old de Havilland aircraft manufacturing plant. The property is adjacent to the Bombardier Toronto manufacturing facility.
Credit: Centennial College

ntario has long been an aerospace industry hub for a host of reasons — an exceptionally well-educated and talented workforce, accessibility and a strong transportation infrastructure, an excellent quality of life, generous incentives to encourage innovation and reasonable operating costs. The province also boasts a diverse supply chain. Everything from avionics to landing gear, aircraft to engines and much more are manufactured by 350 aerospace companies located in Ontario.

In 2012, the Emerson Report, a review of the Canadian aerospace industry mandated by the Canadian government, called for development of an aerospace training and research hub in the province in order to further strengthen the sector. There were plenty of good reasons to do so, not the least of which is maintaining a steady flow in the talent pipeline. According to a survey by Deloitte, "The Economic Impact of the Canadian Aerospace Industry," Canada has the potential to double aerospace employment by 2020. Ontario currently provides 28 percent of Canada’s aerospace workforce — 22,000 people. But the workforce is aging.

Bombardier, the aircraft and rail manufacturer headquartered in Montreal, Que., also has a plant in Toronto, adjacent to Downsview Park, a former Canadian military base. The plant manufactures Bombardier global business jets and Q400 passenger aircraft. Bombardier Toronto has approximately 4,000 employees at an average age of 54. In a little over a decade, many of these employees will be ready for retirement. There is growing concern that the company will experience a significant drop-off of educated, trained workers at every level of manufacturing.

To address those needs, Ontario’s government is supporting a unique partnership between Bombardier and Centennial College to train more people to work in the industry. The province has allocated $26 million dollars to turn the former de Havilland aircraft manufacturing plant at Downsview Park into a new facility for Centennial, allowing the college to expand its aircraft and avionics maintenance education programs.

“For Ontario’s important industries to grow, we need to make sure
employers have the support and workforce they need.”
Ontario Premier Kathleen Wynne

“This building, the old de Havilland building, will be gutted and retrofitted to allow us to create new classrooms, workshops and hangar space,” says Ann Buller, the president of Centennial College. “We currently have 300 students; at Downsview we’ll have space for over 900 full-time students. In the big picture, it will bring all this capacity into one place, and it will be catalytic for the community.”

The Need for a Research Partnership

But that’s not all. The renovated building will also house offices for the Downsview Aerospace Innovation and Research (DAIR) working group, a coalition of education and industry partners creating a global hub for aerospace research. Academic partners include the University of Toronto Institute for Aerospace Studies (UTIAS), the premier academic institution for aerospace education in the province; the Ryerson Institute for Aerospace Design and Innovation (RIADI) at Ryerson University in Toronto; York University and Centennial College. Industry partners include Bombardier Aerospace, FlightSafety, Honeywell, MDA, Messier-Bugatti-Dowty, Pratt & Whitney Canada, Sumitomo Precision Products and UTC Aerospace Systems. The companies represent more than 9,000 direct aerospace jobs in the greater Toronto area. 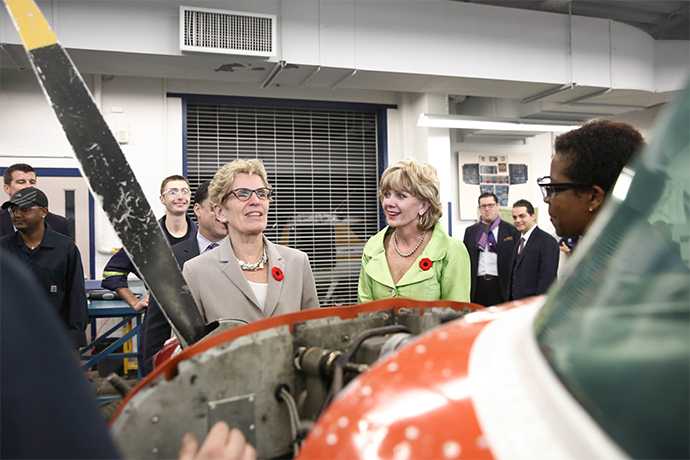 The provincial government, city leaders and an assortment of economic development entities stand firmly behind the venture. “For Ontario’s important industries to grow, we need to make sure employers have the support and workforce they need,” said Ontario Premier Kathleen Wynne. “This project is a great example of how we can help support continued growth in our aerospace sector while connecting more people with great careers.”

The idea is to build an aerospace ecosystem allowing education and industry partners to build relationships fostering innovation and collaboration. “We want to connect to [industry] knowledge by being close to the facilities and allowing activity — knowledge transfer, mentoring, collaborating, R&D — to occur in an ecosystem where we’ll see quicker response time, quicker interaction and faster learning,” says Andrew Petrou, executive director of the DAIR Working Group. “Students have been taught in isolation in the classroom for all these years, whether theoretical in the university or hands-on in the college. We’ve had university students visit Centennial and tell us they’d never seen a riveting lab before. These kids are getting into aerospace. You’d think they’d seen this stuff.”

DAIR will build on Ontario’s robust aerospace core capacities, while complementing the aerospace clusters in Quebec and Winnipeg. Generating R&D activities and providing access to R&D infrastructure for co-locators UTIAS, Centennial and other partners is more than a lofty goal. It’s an imperative.

“Students have been taught in isolation in the classroom for all these years, whether theoretical in the university or hands on in the college. We’ve had university students visit Centennial and tell us they’d never seen a riveting lab before. These kids are getting into aerospace. you’d think they’d seen this stuff.”
Andrew Petrou, executive director, DAIR Working Group

Petrou described an early-stages meeting during which industry leaders were asked what colleges and universities could do to keep companies from relocating elsewhere. “They told us if R&D is not occurring, you’ll lose everything,” Petrou said. “That’s why I go back to the ecosystem. If we don’t output research from Technology Readiness Levels [TRL] 1 all the way up, we will see everything disappear. You can skill people up, like we will through Centennial, but if you don’t have R&D activities on site, if we don’t create a reason for the companies to stay, we will lose a lot. And if you want to get philosophical, we will also begin to erode the middle class. What is the impact of losing the middle class in our country? It’s huge.”

The next major step for the project is finalizing the lease on the de Havilland building, which should happen by the end of March. Soon after, Centennial will put out an RFP for architectural and construction work. “Building will begin shortly thereafter,” says Petrou. “The goal is to open those doors by 2015, but more realistically it would be September 2016.” UTIAS is the only institution, other than Centennial, that will co-locate on the property. All partner institutions will manage their own programs. RIADI will maintain its presence in downtown Toronto, but its students, like York University students just one subway stop away, will attend joint programs at Downsview.

Petrou is chomping at the bit for the programs to begin. “We don’t really know what this is going to look like or even all the partnerships that will come from it,” he said, “But we know that we need to look ahead to the opportunities and how this will make things better for future generations.”

It seems DAIR is on to something. “I was asked to present DAIR to Aero Montreal, the biggest aerospace forum in Canada,” said Petrou. “We were presenting to show the collaborative model. Several hubs came to me, one from the US, another from Russia and one from Ireland. All wanted to come visit us and wanted us to visit them. We aren’t even physically there yet, but we all want the same thing, this gateway to a massive highway of opportunity that can exist.” 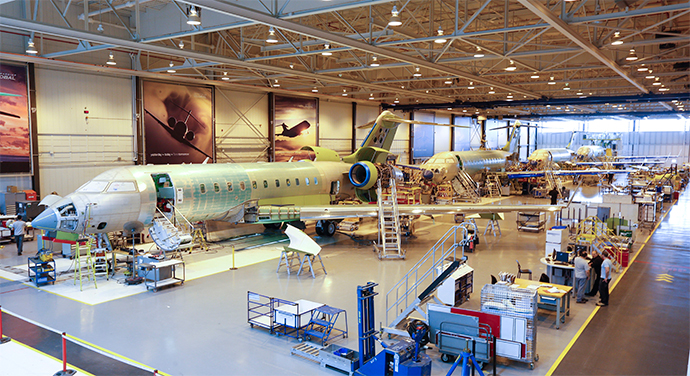 One of Bombardier’s Global Business Jets under construction at the Bombardier Toronto facility adjacent to Downsview Park. Bombardier is a key partner in the DAIR initiative.
Credit: Alex Urosevic/MEDTE