Rolls-Royce Picks Derby, UK, as the Production Hub for the Trent XWB 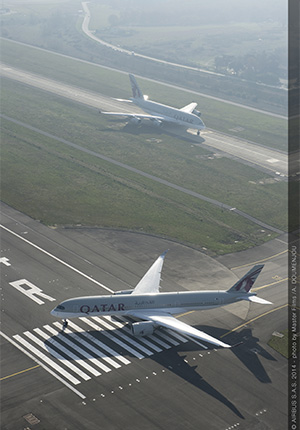 Airbus delivered the world’s first customer A350 XWB jetliner in December 2014, with the landmark A350-900 aircraft provided to Qatar Airways

Rolls-Royce announced December 18th that Derby, in central England, will be the production center for the Trent XWB, which the company says is the world's most efficient large commercial aircraft engine and the fastest-selling wide body engine ever, with more than 1,500 engines sold to 40 customers to date. It is the sole power plant available for the new Airbus A350 XWB.

Rolls-Royce has invested around £30 million (US$46 million) expanding its Derby Assembly & Test Facility and installing new equipment in order to meet customer demand for the engine. Over the next three to four years, Trent XWB production will grow to over 300 engines a year – the equivalent of one every working day – and will stay at that level for several years. The majority of these engines will be built in Derby. The engine is expected to be in service for many years, creating an annuity of aftermarket services that will generate revenues for decades to come.

Almost 10 years ago, Rolls-Royce made its commitment to Airbus that it would develop a new engine for its latest wide-body aircraft. Work on the engine began in 2006. Airbus delivered the first A350 XWB aircraft to launch customer Qatar Airways on December 22nd.

"The Trent XWB engine is fundamental to the future growth of Rolls-Royce,” said Tony Wood, Rolls-Royce, President – Aerospace. “It accounts for half of our civil aerospace order book, before the Airbus A350 XWB has even entered commercial service. That is a great vote of confidence in our abilities at Rolls-Royce."

Added Simon Burr, Rolls-Royce, Director - Trent XWB Programme: "The Trent XWB engine going into production is the exciting culmination of years of hard work by Rolls-Royce employees, partners and suppliers around the world. Many of the team who have been crucial to its development are based in Derby and it is great news for them, the local area and the wider UK economy that Rolls-Royce will build the bulk of the engines here."

Over 10,000 people worldwide, from academics, researchers and Rolls-Royce engineers to supply chain partners and other third parties have contributed to the Trent XWB programme over the years, to get it to a position where it is ready to power the first commercial flights of the Airbus A350 XWB.

The Trent XWB includes ground-breaking technology which has been developed in partnership with academics and researchers across the world through Rolls-Royce’s network of University Technology Centres (UTCs). For example seven UTCs in the UK were involved in the development of the swept fan blade. The Trent XWB is the result of work across 16 manufacturing plants and 11 engineering and testing facilities, as well as work with 12 engineering partners and 75 supply chain partners

Geneviève Fioraso, French Minister of Higher Education and Research, and Jean-Paul Herteman, Chairman and CEO of Safran, inaugurated Safran's new Research & Technology Center, Safran Tech, on January 27th at France's leading science and technology cluster, in Saclay, near Paris. Safran Tech will eventually house some 300 scientists and engineers dedicated to research on key disciplines for all of Safran's business sectors.

Safran Tech will take the Group's R&T to a new plane by facilitating open innovation. The center's staff will team up with universities, government organizations, industry partners and innovative startups, working in joint laboratories or platforms to form a top-tier scientific community, characterized by creativity and connectivity, and open to the entire world. Safran Tech is already working with leading national research organizations such as the Université d’Orsay, Ecole Centrale de Paris, Sup’elec, Sup’Optique and ONERA, and will soon house a joint laboratory with the French Alternative Energies and Atomic Energy Commission, CEA, dedicated to research on sensors and their applications. Another upcoming venture is a joint vehicle robotics laboratory, created by PSA (Peugeot-Citroën), Valeo, the École des mines de Paris engineering school and Safran. Two research centers belonging to the École des Mines ParisTech (Ecole des Mines de Paris) will eventually be located on the site.

"Safran Tech reflects Safran's ongoing investments to ensure the future of our businesses, our industry, the knowledge economy in Europe, innovation and growth," said Jean-Paul Herteman, Chairman and CEO of Safran. "Thanks to our predecessors' genius and pertinent investments, the European aerospace industry in general, and Safran in particular are rolling out a new generation of products offering unexcelled performance. We have an unprecedented backlog of orders, equal to an all-time record of seven years of business. But you can never take anything for granted, especially in our industry. Building on our long heritage, we have to create a future that is worthy of the legacy left by the pioneers in aerospace, defense and security."

Boeing and Embraer opened a joint sustainable aviation biofuel research center on January 14th in a collaborative effort to further establish the aviation biofuel industry in Brazil. At the Boeing-Embraer Joint Research Center in the São José dos Campos Technology Park, the companies will coordinate and co-fund research with Brazilian universities and other institutions. The research will focus on technologies that address gaps in creating a sustainable aviation biofuel industry in Brazil, such as feedstock production, techno-economic analysis, economic viability studies and processing technologies.

“Boeing and Embraer, two of the world’s leading aircraft manufacturers, are partnering in an unprecedented way to make more progress on sustainable aviation biofuel than one company can do alone,” said Donna Hrinak, president, Boeing Brazil and Boeing Latin America. “Brazil, a pioneer in the sustainable fuels industry, will play a leading role in establishing the biofuels industry and helping meet aviation’s environmental goals.”

“Our purpose is to support work on developing and maturing the knowledge and technologies needed to establish a sustainable aviation biofuel industry in Brazil with global reach,” said Mauro Kern, executive vice president, Engineering and Technology, Embraer. “Brazil has shown its potential and is already a benchmark for the clean-energy industry, having created very successful ethanol and biodiesel industries.”

Boeing’s biofuel collaboration with Embraer is led by Boeing Research & Technology-Brazil (BR&T-Brazil), one of Boeing’s six international advanced research centers. BR&T-Brazil works with Brazil’s research-and-development community to grow Brazil’s capabilities and meet the country’s goals for economic and technology development while supporting the creation of innovative and affordable technologies for Boeing’s business units. In addition to its collaboration in Brazil, Boeing has active biofuel-development projects in the United States, Middle East, Africa, Europe, China, Japan, Southeast Asia and Australia.

Boeing has begun construction on a 7,000-sq.-ft. (650-sq.-m.) addition to its research and technology center in Huntsville, Ala. Known as the Center for Applied Simulation and Analytics (CASA), the new lab space will serve as a hub for Boeing, its research partners and academic collaborators to create and develop simulation and analytics technologies, providing advanced simulation of Boeing products from concepts through operations.

"This lab will help us create flexible and affordable environments for modeling, simulation and analytics research," said Steve Swaine, leader of the Boeing Research & Technology–Alabama research center and director of Support and Analytics Technology. "Our goal is to bring the best and brightest in the support and analytics industry together in one location and give them all the tools they need to create the most effective simulations and analysis methods for validating new technologies."

The lab, which is scheduled to open in mid-2015, will consist of seven individual laboratories and a large collaboration center that will provide an immersive environment for technology development and customer interaction. It will take advantage of Boeing's extensive worldwide capabilities to enable geographically distributed teams to provide advanced math, analytics and simulation technology to improve the effectiveness and efficiency across the lifecycle of Boeing products and services.

"The growth in BR&T-Alabama shows that Huntsville is a leader in technological advancement," said Mayor Tommy Battle. "Advanced analytics skills are needed to create the next-generation capabilities in aerospace. With up to 300 jobs opening up over the next two years, Boeing is capitalizing on the talent, ability and incredibly educated workforce we have in Huntsville, further demonstrating why Huntsville is a great destination for talented engineers and technicians."

Global security and aerospace leader Lockheed Martin celebrated the opening of a new state-of-the-art collaboration center in Masdar City on December 8th to explore innovation, advance security and help to achieve the UAE's vision of building a strong resilient economy. The Center for Innovation and Security Solutions (CISS) is the first of its kind outside the United States. Located in the Incubator Building at Masdar City—Abu Dhabi's low carbon, sustainable urban development—the Center is a reconfigurable, multi-purpose facility. It will enable cooperation between Lockheed Martin and the UAE government, industry and academia to develop solutions that address challenges facing today's world, from climate change to resource scarcity, and advance scientific discovery.

Speaking at a ribbon-cutting ceremony for the CISS, Marillyn Hewson, Chairman, President and Chief Executive Officer of Lockheed Martin, highlighted the company's commitment to enhancing the development of the UAE's skill-base to deliver economic benefits. "We value the entrepreneurial, innovative spirit we see in the UAE and the commitment to real-world solutions and progress that Masdar represents," said Hewson. "We look forward to collaborating on innovations, growing technical expertise and contributing to economic development."

The CISS is the result of a long-standing partnership between Lockheed Martin and the UAE in programs that support government, industry and the development of skills and expertise. Ten separate projects are underway or in planning.

Dr. Sultan Al Jaber, Chairman of Masdar, Abu Dhabi's renewable energy and clean technology company, said, "By combining Lockheed Martin's 100 years of technology expertise with Masdar's holistic approach towards higher education, R&D and technology deployment, we will be able to deliver innovations that address the UAE's most important challenges. The Center will facilitate capacity building and stimulate knowledge transfer by enabling access to Lockheed Martin's extensive network of laboratories, research facilities and centers of excellence across the globe."

In addition to Masdar, Lockheed Martin has partnerships in the UAE with Khalifa University, UAE University and Abu Dhabi Polytechnic. In October 2014, 12 Emirati engineering students from Abu Dhabi Polytechnic visited Lockheed Martin facilities in the U.S. to participate in hands-on cyber security exercises in the company's labs. Lockheed Martin also provides support to Emirati organizations such as the Arab Youth Venture Foundation, to empower the region's next generation of scientists, inventors, business leaders and entrepreneurs. These partnerships strengthen Lockheed Martin's relationship with the UAE, which stretches back nearly 40 years. Initially focused on defense programs, this relationship has grown to apply the same focus and innovation to new challenges such as energy, cyber security and sustainability.