The groundbreaking also included a dedication of the 12-megawatt solar field currently under construction by Silicon Ranch Corporation on approximately 100 acres of adjacent land in Highland Industrial Park, in the city of East Camden. Through a unique contract, Aerojet Rocketdyne, Arkansas Electric Cooperative Corporation, Ouachita Electric Cooperative Corporation and Southern Arkansas University Tech collaborated to bring the first, large-scale solar project to Arkansas. Once complete, the facility will not only provide clean energy for Aerojet Rocketdyne operations, it will generate enough electricity to power the equivalent of 2,400 single-family homes.

“This solar project is a key part of Aerojet Rocketdyne’s commitment to operate all our sites in a sustainable manner,” said Rocketdyne CEO and President Eileen Drake. “Working with our solar partners represented here today we are helping bring the state’s largest solar field to life in order to provide a clean alternative energy source for our electricity needs and those of neighboring businesses and residences.” 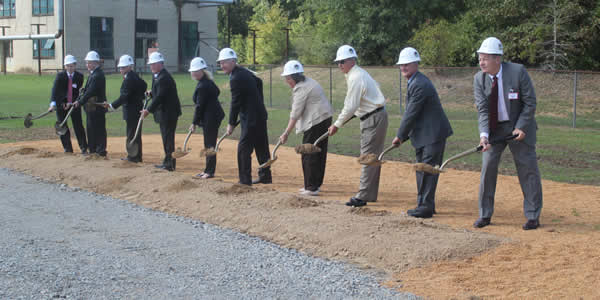 Boeing opened its research and technology center in South Carolina on September 24th. The 104,000-sq.-ft center leads the company's research and development efforts in areas of advanced manufacturing with a focus on composite fuselage and propulsion systems production. It includes lab spaces where scientists and engineers research and develop technologies in advanced production systems; nondestructive evaluation and inspection; production analytics and advanced test systems; structural repair technologies; electromagnetic effects; chemical technology; and composite fabrication and materials. The center also includes two autoclaves, which are used to cure parts made from composite materials; a paint booth with automation capabilities; and a clean room to combine composite layers together.

"Increasing our research and development footprint here demonstrates our continued commitment to the state of South Carolina, and will help Boeing and the region attract, develop and retain the best talent in the industry," said Beverly Wyse, vice president and general manager of Boeing South Carolina. BR&T-South Carolina joins the company's 10 other research centers around the world in Australia, Brazil, China, Europe, India, Russia and the United States, including Alabama, California, Missouri, South Carolina and Washington.

On August 27th, Gov. Bobby Jindal and Bell Helicopter CEO John Garrison highlighted the completion of the company’s Lafayette Aircraft Assembly Center, where Bell Helicopter plans to begin commercial production of the new Bell 505 Jet Ranger X aircraft in 2016. The new 82,300-square-foot assembly center is located at the Lafayette Regional Airport. Production will follow final certification of the assembly center and aircraft by the Federal Aviation Administration and other regulators. As the first modern-era aircraft assembly facility in Louisiana, the Bell Helicopter site will create 115 new direct jobs, with an average salary of more than $55,000 per year, plus benefits. LED estimates the aerospace project will result in another 136 new indirect jobs, for a total of more than 250 new jobs in Acadiana and surrounding areas.

Already, Bell Helicopter has received approximately 350 letters of intent from customers wishing to purchase the Bell 505. The five-seat, single-engine, turbine helicopter builds upon Bell Helicopter’s proven technology over a half-century of producing SLS (or short-light-single) helicopters, with more than 7,500 aircraft delivered in the SLS class.

The State of Louisiana funded construction of the $26.3 million facility that houses Bell Helicopter’s Lafayette Aircraft Assembly Center. The facility is owned by the Lafayette Regional Airport and leased by Bell Helicopter. The company will make an additional capital investment of $11.5 million in equipment and tooling at the 14.5-acre airport site, which is adjacent to U.S. 90. LED offered the company a competitive incentive package that includes performance-based grants of $4 million for lease support, $3.8 million for infrastructure and equipment, and $0.2 million to reimburse relocation expenses. Louisiana also is providing the comprehensive solutions of LED FastStart®, the nation’s No. 1 state workforce development program for six consecutive years.

Employment at the Lafayette Assembly Center will ramp up from approximately 40 positions in 2015 to 115 jobs by 2018. In addition to creating 115 new direct jobs at the assembly center, Bell Helicopter will retain more than 60 jobs in the Lafayette area at two existing facilities that perform rotor blade and composite repair and overhaul.

Rolls-Royce, Hispano-Suiza (Safran) Announce JV and a New Facility
Rolls-Royce and Hispano-Suiza (Safran) have named their joint venture Aero Gearbox International and announced plans in August to construct a new production plant in Poland. The news follows the signing of a final agreement, on 24 October 2014, to create a jointly-owned company that will design, develop, produce and support accessory drive trains (ADTs) for all of Rolls-Royce's future civil aircraft engines.

The new venture will capitalize on its parent companies’ combined experience and expertise, encompassing the capabilities of Hispano-Suiza in the design and production of accessory drive trains, and the engine design and propulsion system integration skills of Rolls-Royce.

The construction of a new production plant will start at the end of 2015. It will be located in the Podkarpackie Province in southeast Poland. This dedicated production facility will harness the region’s mechanical expertise and draw on the experience of the Hispano-Suiza Polska facility located in Sedziszow Malopolski. The new plant will initially grow to approximately 110 people and the first deliveries are expected in 2017. Rolls-Royce and Hispano-Suiza will manage Aero Gearbox International’s operations. The joint venture will initially have a total of 60 employees from the two parent companies spread across Colombes (near Paris, France), Derby (UK) and Dahlewitz (Germany). It is headquartered at Hispano-Suiza's site in Colombes.

Rolls-Royce to Invest in Its Scottish Aerospace Plant

“Our investment in Inchinnan demonstrates our commitment to innovative technology and world-class facilities which will improve performance and drive profitable growth for our business,” said Mike Mosley, Rolls-Royce, Chief Operating Officer – Supply Chain. “We recognize the dedication and flexibility of the Inchinnan workforce who continue to play a key role in the success of Rolls-Royce.”

Rolls-Royce initially invested £85 million ($129 million) in the facility at Inchinnan and has continued to invest over the last decade. The new location for the manufacture of shafts will provide Rolls-Royce with capacity needed to deliver on its multi-billion pound order book. It complements an existing facility in Derby and capacity in our external supply chain. The investment will potentially mitigate the impact of job reductions announced earlier this year in Inchinnan as part of the Aerospace restructuring programme.

Blue Origin, LLC, a privately funded aerospace company owned by Amazon.com founder Jeff Bezos, announced on September 15th the selection of Florida’s Space Coast as the site for the company’s next multi-million dollar manufacturing and processing facility. Blue Origin’s Orbital Launch Vehicle (OLV) will be designed, manufactured, launched and ultimately returned to Brevard County, Florida. This marks the first time all aspects of commercial spacecraft development and launch will be completed within the Space Coast.

The company plans to create 330 jobs with an average wage of $89,000, and will make a significant capital investment of $205 million over five years through the selection of a site in Exploration Park, just south of Kennedy Space Center in Titusville, Florida. The company is expected to break ground on the new processing facility in early 2016. Georgia, North Carolina, and other sites within Florida were considered for potential operation centers before ultimately selecting Brevard County during this competitive relocation process.

HAECO Cabin Solutions Announces Facility Expansion in N. Carolina
HAECO Cabin Solutions, a unit of HAECO Americas and part of the HAECO Group, announced August 11th that it will expand its design engineering and interiors product manufacturing capacity in a new, 259,000 square foot facility in High Point, N. Carolina, near its HAECO Americas' headquarters in Greensboro. The facility is expected to be operational in the first quarter of 2016.

HAECO says it is experiencing increased demand for the company's engineering capabilities, such as airline fleet retrofit programs, as well as interiors products like the company's new Vector-Y™ passenger seats and FeatherWeight™ galleys and lavatories. Up to 400 employees are expected to work at the new facility, including a mix of new hires and transfers from other existing HAECO locations.