To the Moon, Alice! 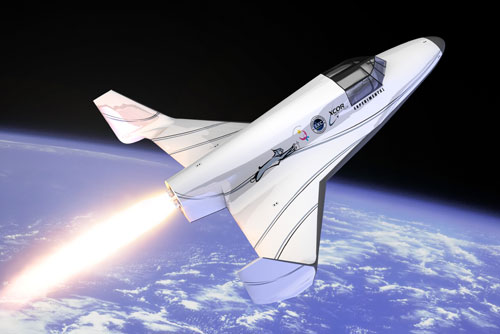 XCOR is developing and will begin testing in 2016 the Lynx family of manned spacecraft at the Midland Air & Space Port.
Photo courtesy of Midland Development Corp.
by MARK AREND
N

eed a ride outside the troposphere? Commercial air service will only get you so far. But one day, passengers will be able to change aircraft at Midland International Air & Space Port from a commercial flight to one of the spacecraft now in development, like the XCOR Lynx, a piloted, two-seat, fully reusable liquid rocket powered spacecraft that takes off and lands horizontally. XCOR Aerospace is one of two aerospace companies resident in the Midland Spaceport Business Park, where it’s establishing an R&D center. It plans to commence space flights at Midland International Air & Space Port in 2016. The other is Orbital Outfitters, which develops, manufactures and tests spacesuits.

In September 2014, the FAA approved the Midland International Airport as a licensed Commercial Space Launch Site, giving the private space sector industry a new location for spacecraft development, testing and flight. There are others — in Florida, California, Alaska, New Mexico, Virginia, Oklahoma and a second in Texas at Ellington Airport in Houston. But only Midland Air & Space Port is located at a commercial airport. And it’s the only launch site with MACC — the Midland Altitude Chamber Complex, a facility for testing space and pressure suits, payloads, subsystems and components operated by Orbital Outfitters.

Interest in and development of manned space flights are well under way.

“Humans need pressure suits to keep them alive at extreme altitudes and all the way into orbit,” says Livingston Holder, who administers MACC on behalf of Orbital Outfitters. “The ones used by NASA were very bulky and very expensive. An EMU [extra-vehicular mobility units] I put on was $1 million per copy, and hundreds of millions of dollars went into making that one copy. In the commercial space, a price tag that high is unsustainable.” Orbital Outfitters is bringing the price of manufacturing and operating space suits to an affordable level for companies, like XCOR, making the spacecraft.

“In Midland,” says Hunter, “we’ll be able to build the suits and test the suits, which is where MACC comes in. You can test that suit up to the most extreme conditions that one would ever expect in space flight, even in an emergency in space flight, and make sure that suit will protect its occupant. We can also put occupants in the suit in the chamber and get them acclimated to what wearing a suit under pressure feels like. It is not like walking around on the surface of the earth. The chamber allows two people to do that. We’re not just testing the suits, but we’re training the people that will be using the suits in the future.”

The government operates such chambers, and Hunter says he knows of one other commercially operated one, but it’s not equipped to test suits beyond about 30,000 feet. “Our chambers will take you to an infinite altitude — full vacuum.”

Midland Development Corp. owns MACC and is recruiting other space and aerospace companies to the Spaceport Business Park. “The altitude chamber gives us an advantage in that companies needing that kind of facility can locate near it,” says Pam Welch, executive director. “The commercial space industry is in the infancy stage, but it’s one of the fastest-growing industries right now. We’re getting in on the bottom floor so that we have an advantage in the future. Oil and gas is our main industry, and we’re working on diversifying our economy by bringing in a whole new industry.”