Walmart’s new home office is one of many corporate administrative hubs finding a comfortable fit with room to grow in the Natural State. 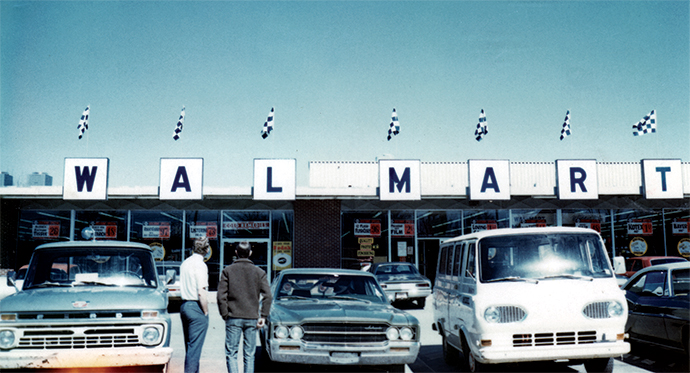 Walmart Store No.1 (above) opened in Rogers, Arkansas, in July 1962. Today the retail giant, which operates over 11,700 stores in 28 countries in addition to e-commerce websites, still calls Northwest Arkansas home.
Photos courtesy of Walmart
by ADAM BRUNS

The home office Sam Walton established back in 1971 in Bentonville was needed because the company had outgrown its original home on the Bentonville square. Nearly a half-century later, the growth is in the footprint of the office itself, which Walmart President and CEO Doug McMillon described in a recent open letter as a "patchwork of more than 20 buildings in Northwest Arkansas," many of which "are significantly beyond their shelf life. They are expensive and inefficient to maintain, costing millions of dollars of accelerating upkeep every year. And because they are so dispersed, they literally encourage us to work in silos and cause us to waste time and energy traveling between locations, many of which have inadequate parking options."

So a new home office is in order, still in Bentonville, this time along J Street, and with the sort of 21st century amenities today's knowledge worker has come to expect: lots of natural light, immediate access to fitness facilities and community trail systems, and higher-quality food services. Now the community coordination, planning and design process has just begun. But it's the next chapter in the success story that began when "Mr. Sam-" opened his first store in nearby Rogers on July 2, 1962. Today Walmart operates more than 11,700 stores in 28 countries and several e-commerce websites, employs approximately 2.3 million associates, and operates more than 150 Walmart and Sam's Club distribution centers in the U.S. alone.

"This is part of Walmart's strategy to win," the company notes on its website. "The new facilities will help accelerate change, accommodate a more digitally native workforce, and encourage more collaboration and speed. The combined changes will help us get the most out of our existing teams, and also help us attract the next generation of talent we need to compete."

Springdale is Where Tyson Foods' Heart Is

The company has been doing business in Arkansas for 83 years, and in April 2018 marked 50 years of continuous operation at its plant in North Little Rock, which today employs 200 people, 34 of whom have 20 years of service or more. The company's purchase of the plant "marked the start of our production of further-processed chicken, which became the cornerstone of our poultry business," said John Tyson, chairman of Tyson Foods' Board of Directors. "It also enabled us to enter the food service business."

Through its subsidiaries, Tyson Foods today operates facilities in 20 Arkansas communities, employing more than 23,000 team members (nearly 20 percent of the company's 122,000 globally) with an annual payroll of more than $1.3 billion. Annual payments to Arkansas-based family farmers who grow chickens for Tyson Foods exceed $260 million. The company estimates its total statewide annual economic impact to be more than $1.9 billion.

In November 2017, Tyson celebrated the grand opening of the company's new office building that will bring approximately 300 additional team members to Emma Avenue in downtown Springdale, where another Tyson building already is home to 100 team members.

Bank of the Ozarks Grows in Little Rock — Again

In Ozark in April 2018, Bank of the Ozarks announced it will construct its fourth operations building in downtown Ozark and create as many as 133 new jobs over the next five years. The bank recently was named the nation's best-performing bank, claiming the top spot in the S&P Global Market Intelligence ranking of regional banks for 2017. But that isn't all the bank is building.

In September 2017, the bank's CEO and Chairman George Gleason joined Arkansas Governor Asa Hutchinson and Little Rock Mayor Mark Stodola to formally announce the bank's plans to build a new 247,000-square-foot corporate headquarters in Little Rock. The bank acquired a 44-acre site at The Ranch located on Highway 10 in West Little Rock for initial development and future expansion, as needed over time, for its corporate headquarters campus to support the bank's continued growth. Approximately 500 employees are expected to move into the building when construction is completed in late 2019 or early 2020, with capacity to accommodate 800 to 900 employees.

"Our home state has provided a talented and dedicated workforce, enabling our company to thrive and grow," said Gleason. "Little Rock's southern charm, abundant arts and entertainment venues, beautiful and natural setting and rich heritage also contribute to our ability to recruit exceptional talent at a national level. Our new campus in Little Rock will provide capacity for our company's long-term growth over many years."