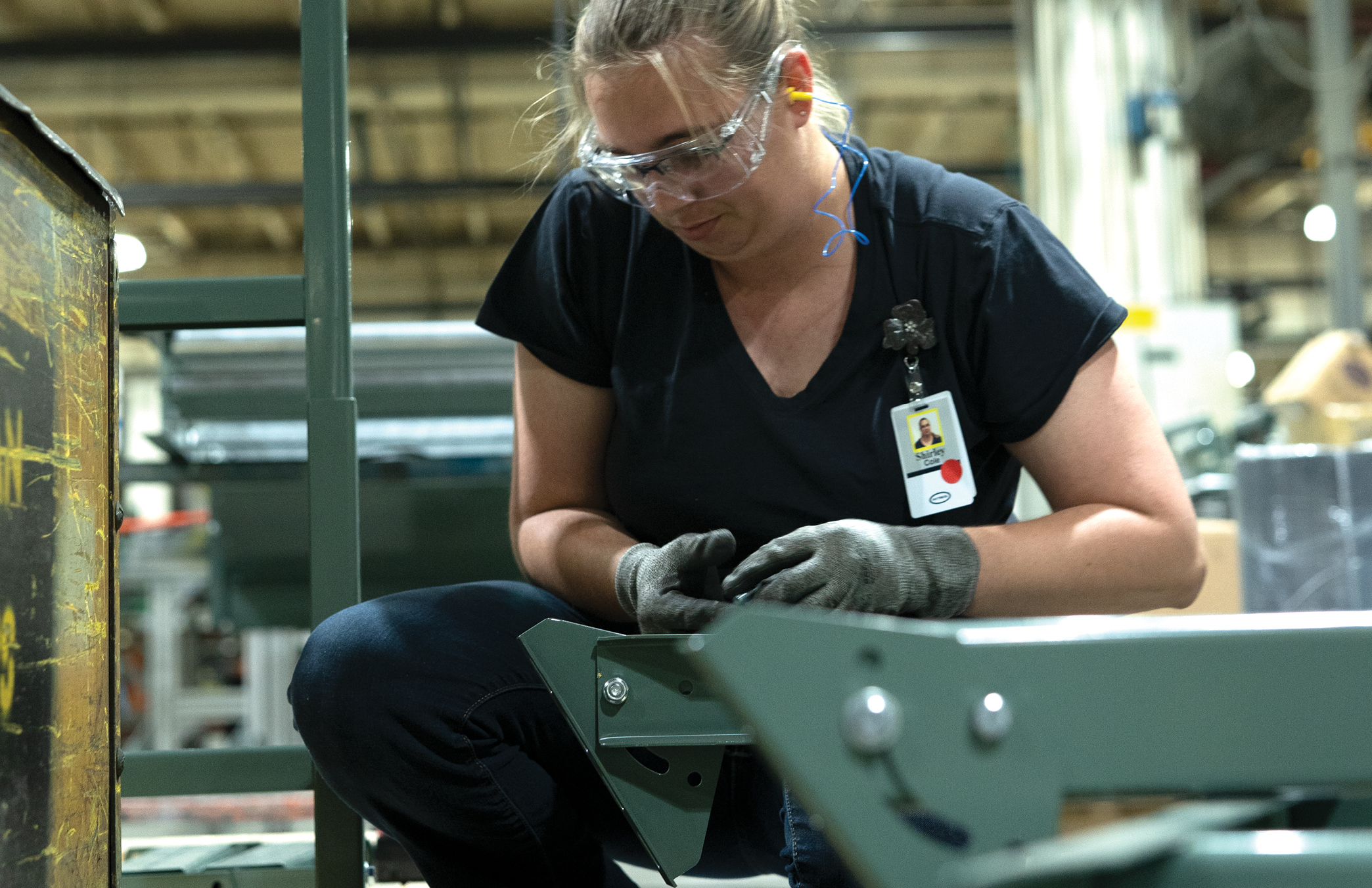 The Arkansas STEM Coalition is preparing workers for high-wage jobs in advanced manufacturing,
Courtesy of AEDC
by Gary Daughters
W

ith a deep bench of more than 40 colleges and universities, innovative workforce development programs and forward-looking partnerships with industry, Arkansas is rising to the 2020s challenge of staffing an increasingly tech-based economy amid generational changes to how and where people work.

Through its groundbreaking Computer Science Initiative, Arkansas became the first state in the country to require all public high schools to provide classes in computer coding. Since the program’s launch in 2015, Arkansas has increased computer science enrollment by more than 800%. Arkansas is one of three states that requires a computer science credit to graduate.

As the initiative has drawn the attention of other states looking to boost digital education, it has continued to evolve and now offers instruction to Arkansas high school students in such in-demand fields as cybersecurity, data science and artificial intelligence.

“Digital literacy,” says Gov. Asa Hutchinson, who led the state’s charge into digital education, “is the foundation our nation needs to succeed in the high-tech economy of the 21st century in everything from logistics to farming to national security.”

Founded in 2010, the Arkansas STEM Coalition serves as “convener and catalyst” for Science, Technology, Engineering and Math education in settings ranging from school classrooms to career learning centers. The coalition’s Laptop Loan Education Program, a partnership with AT&T, loans laptops to schools, nonprofits and community organizations for use among students in grades 4-12. To promote STEM education among women, the coalition facilitates STEM Girls Leadership Conferences at university campuses across the state and also collaborates with Arkansas-based Walmart on a STEM mentorship program for women and girls.

Among the most telling examples of Arkansas’ leadership in the new workforce paradigm, the Northwest Arkansas Council’s “Life Works Here” incentive program, launched in 2020 to attract top talent to the region, has leveraged the cachet of one of America’s hottest emerging destinations and received an astonishing tens of thousands of applications from professionals around the world.

“Northwest Arkansas has emerged as one of the most desirable places to live in the county, positioning the region as a top destination in an economy redefined by remote work opportunities,” says Mervin Jebaraj, director of the Center for Business and Economic Research at the University of Arkansas’s Sam M. Walton College of Business.

With more than 66,000 workers having applied for a $10,000 relocation incentive — complete with the offer of a free mountain or road bike to tour the region’s nearly 500 miles of biking trails — “Life Works Here” has issued awards to 100 recipients, including an executive chef from Atlanta, a digital marketing manager from Denver, a gaming producer from Los Angeles and a cloud technology manager from San Francisco.

“We’ve put together a workforce resilience assessment to help companies take a look at themselves and understand what’s good about their culture.”

“This program,” says Nelson Peacock, president and CEO of the Northwest Arkansas Council, “is not only a benefit to the recipients and new talent for our region, but it also contributes to the vibrancy our existing local economy. We’re overwhelmed,” says Peacock, “by the unbelievable response.”

Eyes on the Future

Future Fit, a manufacturing workforce campaign spearheaded by the Arkansas Economic Development Commission (AEDC), has expanded to 10 community colleges and universities since its inception in 2018, according to Steve Sparks, AEDC’s director of Existing Business Resources. Geared toward boosting the prospects of individuals seeking a career in manufacturing, Future Fit includes a mix of classroom instruction, online tools, and hands-on skills demonstration. The Future Fit curriculum was developed in partnership with the Society of Manufacturing Engineers along with Arkansas manufacturers like Rheem, MAHLE, Trane, Gerber, and International Paper.

“We’ve had some real success lately,” says Sparks, citing a retention rate of 95% among members of a Future Fit cohort recently employed by businesses in the Fort Smith area.

Just as Future Fit was conceived through an extensive probe into the needs of Arkansas manufacturers, Sparks says the AEDC continues to engage with industry toward a two-way understanding of the workforce puzzle, citing a newly launched statewide survey of manufacturers.

“We’re in the process of understanding what are the expectations of the emerging workforce. We’re beginning to develop programs that deal not just with workforce training, but also workplace training,” Sparks says. “It is crucial for employers to understand why some workers stay and others leave.”

“We’ve put together a workforce resilience assessment to help companies take a look at themselves and understand what’s good about their culture and company and also highlights areas where maybe they’re not doing so well.”

The Reimagine Arkansas Workforce Project is a direct response to the challenges wrought by the coronavirus pandemic and its aftermath. Supported by federal CARES Act funding totaling some $13.5 million and administered by the University of Arkansas, the program offers free, short-term online training in 15 career fields including agriculture, heath care, manufacturing, supply chain management and technology. Most of the self-paced courses can be completed within six to 12 months, with participants receiving a Certificate of Completion from the University of Arkansas.

“The goal of Reimagine,” says Tara Dryer, senior manager at the university’s Global Campus, “is to help people improve their life situation. If they are unemployed or underemployed and need to get back to work, often cost is a big barrier. We are removing that barrier.”