California gets intentional about its approach to economic development. 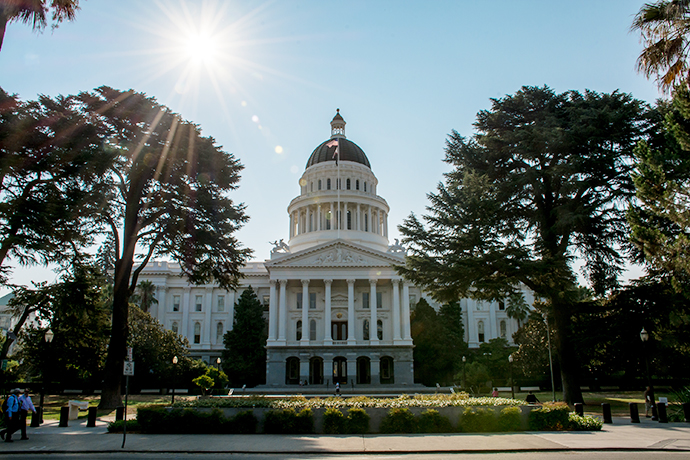 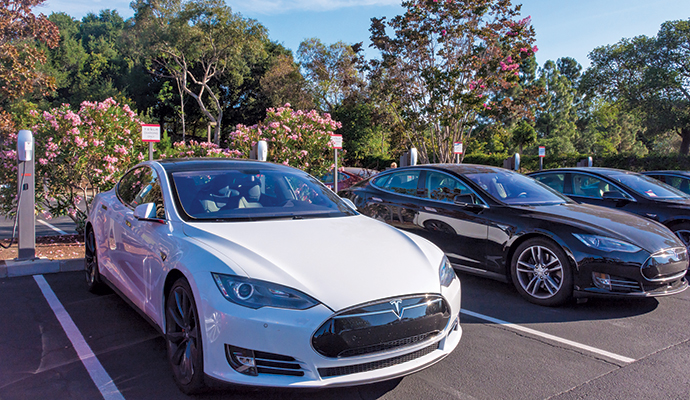 Tesla cars charging in their designated parking spaces at the Tesla headquarters in Palo Alto.
fter years of watching governor after governor swoop into California and poach some of the state’s best companies away, Gov. Jerry Brown is getting intentional about the way he fights back.

Brown may not exactly rekindle memories of Clint Eastwood’s Dirty Harry character. But the governor does have one thing in common with the fictional cop: This time, he’s carrying a bigger weapon than the other guys.

No, it’s not a .44 Magnum. It’s called California Competes. The program is hailed by many as California’s most ambitious and aggressive economic development initiative in the state’s 165-year history.

The California Competes Tax Credit is an income tax credit available to qualifying businesses that want to come to California or stay and expand in the state. Tax credit agreements are negotiated by the Governor’s Office of Business and Economic Development (GO-Biz) and approved by a statutorily created California Competes Tax Credit Committee consisting of the state treasurer, the director of finance, the director of GO-Biz, and one appointee each by the Speaker of the Assembly and the Senate Rules Committee.

The new state incentive targets “high-value” businesses that are growing in California. The goal of the program is to attract and retain employers in industries with high economic multipliers and high wages. The tax credit is awarded through a two-phase competitive process and is capped at $200 million for each of the next two fiscal years. Any business may apply, and 25 percent of the available funds are set aside to help small businesses grow.

California Competes and two other initiatives replace the state’s underperforming Enterprise Zone program. A partial sales tax exemption for manufacturing equipment and the New Employment Credit are the other two. The latter applies to qualifying firms that hire new workers in designated census tracts or economic development areas.

One of the high-value sectors the state hopes to grow is its emerging green and sustainable economy. According to a recent report by the Los Angeles-based Kosmont Companies, “the march to an economy focused on industrial and commercial processes that reduce energy consumption and achieve significant carbon footprint reduction is on in California.” The report goes on to state that “the state is on the brink of adopting more green legislation that would accelerate the efforts of AB 32, SB 375 and SB 535 by requiring that the state generate 50 percent of its electricity from renewable sources, double energy efficiency in older buildings, and reduce gasoline usage by half.”

The conclusion of the Kosmont report is succinct: “With sustainability as a goal and potentially a foundation of California’s ‘green’ economy, to the extent the state does attract businesses, it will likely come from sustainable industries and processes.”

Another $600 Million to Invest

One of the ways the state plans to do this is through the development of newly formed Enhanced Infrastructure Financing Districts (EIFDs). “EIFDs return a mechanism to California local agencies that can help fund projects, which may in turn spur economic development,” the Kosmont report states.

The creation of EIFDs was authorized by SB 628, which enables a city or county to initiate a form of tax-increment financing which permits collaborative cities, counties and special districts to fund a broad array of economic development projects. These projects must conserve water, reduce greenhouse gas (carbon dioxide) emissions, and create new jobs in California.

“After wandering in the desert without effective economic development tools for a number of years, California is laying the groundwork to empower cities and counties to induce economic development,” says Larry Kosmont, president of the Kosmont Companies. “Although EIFDs are still a work in progress, getting TIF back allows the state to be more competitive in the fight to create economic development opportunities through attraction and retention of businesses.”

Brook Taylor, deputy director of communications for California GO-Biz, says the state’s re-envisioned approach to economic development is working. “In 2014, California led the nation in job creation with 498,000 new jobs — 102,000 more than the number two state, Texas,” he says. “Since June 2014, GO-Biz has awarded $180 million to 241 companies that are projected to create 35,000 jobs and $9.1 billion in investment — companies like Tesla, Amazon, Samsung, Hyundai and Red Bull. With another $600 million in available tax credits, California is on track to recruit more massive job-creating projects.”

“I was at SIOR last week in Chicago. A consultant came up to me and said, ‘I think you guys really hit a gold mine with this,’ ” says Ingersoll. “It helps companies focus on what they are doing and see where they fit in best with the state. It does not have the geographic limitations that other programs had. It is a very focused and easily accessible committee that determines the awards of the tax credits. There is an online application process. If your project does not get selected this quarter, it can automatically go into consideration in the next quarter.”

Beyond the programmatic changes, Ingersoll says there is a revived spirit of cooperation permeating the state. “The state is working more cooperatively now than we ever have,” she notes. “We recognize that we are all in this together. We have different economies throughout the state, but we are all on the same team. People are no longer recruiting companies to move from one county to another. Instead, they are referring leads to one another. We have adopted the philosophy that a high tide lifts all boats.”

Evidence that California’s revamped approach to economic development is working is now pouring in:

On top of the new incentive programs, the state announced July 1 the launch of the California Business Portal — a one-stop-shop website for business owners looking for information and assistance. The site, www.BusinessPortal.ca.gov, “is a response to the needs of the business community and their request for better online tools,” says Panorea Avdis, chief deputy director of GO-Biz.

“As the global hub of innovation, California is often the first to meet challenges with novel solutions,” says Robert Callahan, California executive director for The Internet Association. “This portal is a great example of how government can harness the power of the Internet and empower citizens through the use of technology.”

Gurbax Sahota, president and CEO of the California Association for Local Economic Development (CALED), says that “the state has gone a long way toward changing the mood of local economic developers around the state. I like the model that the California Competes Tax Credit is using. It is one of the best practices in economic development. In the big picture, the state is moving into a stronger position.”

She adds that “we have talked a lot at CALED about promoting California. How do we put out a positive story about California using statistics? We have to have an answer to people who trash the state in the media. The reality is that we are turning around as a state. California is back in the lead in job growth and we are rebounding with our economy.”

The numbers appear to back up her claim: