High-speed rail will allow industry clusters and the human beings that comprise them to connect like they never have before.

by ADAM BRUNS
S ince announcing its high-speed rail (HSR) plans in 2012 following the go-ahead from state legislators and Gov. Jerry Brown, the California High-Speed Rail Authority has run into its share of skeptics. They range from those shouting down the cost to Elon Musk, whose futuristic Hyperloop concept goes high speed one better.

But as with many areas of endeavor, California is not afraid to be an early adopter — or inventor.

For evidence of high-speed rail’s real potential, you have only to turn to the three dozen global-superpower engineering and infrastructure firms who by Sept. 30, 2015, had sent expressions of interest. They ranged from Australia to Spain to China, including such names as Bechtel, Macquarie, Acciona, Cintra, Parsons, Siemens, Kiewit, Fluor and the very specifically named Beijing National Railway Research & Design Institute of Signal & Communication Group Co., Ltd.

If all of those names are interested, as the saying goes, there must be some there there.

Siemens has skin in the game, declaring its 800-employee rail manufacturing campus in the state capital of Sacramento ready and capable of assembling the company’s Velaro high-speed train. With potential future expansions, Siemens could add up to 250,000 sq. ft. of additional manufacturing space, for a total of 550,000 sq. ft.

The facility already has built more than 1,500 rail vehicles since its opening in the 1980s, including light rail, locomotives and streetcars already being put to use in the state. In March 2014, the Departments of Transportation for the states of Illinois, California, Michigan, Missouri and Washington awarded Siemens a $225-million contract for the delivery of 32 diesel-electric passenger locomotives. It includes a purchase option for another 225 locomotives which will be used for regional and mainline trains traveling at speeds of up to 125 mph — a bit slower than the HSR target of 220 mph.

Parsons declared its all-in intentions in 2013 when it announced the opening of the Tutor Perini/Zachry/Parsons Joint Venture’s (TPZP JV) three-floor office in Fresno. That was when the JV received an executed contract — valued at approximately $985 million, plus an additional $53 million in provisional sums — from the HSR Authority to construct the first segment of the California high-speed rail project from Fresno to Madera.

The complete first phase of the system, from Burbank to Merced, would run 300 miles and cost over $31 billion. The system will eventually extend to Sacramento and San Diego, total 800 miles, and have up to 24 rail stations.

A 2012 economic impact study from Parsons Brinckerhoff comparing the proposed system to systems in Europe and Japan stated, “With six metro regions in the state with a population of over 1 million, high rates of service sector employment, and commitments throughout the state to supportive local and regional transit systems, international experience suggests that high speed rail in California is a worthwhile investment.”

The report highlighted the role of corporate cluster connection in making that investment pay off — beginning with the high-tech and high-concept companies that are the state’s innovation signature.

“The size and diversity of the Southern California economy makes it an ideal partner for the more focused Northern California economy,” it said. “High-speed rail will improve access and connectivity between the two megaregions, and can create interconnected clusters of activities on both sides of the network — improved access between the Bay Area and Southern California can potentially create specialization of activities around stations in each region focused on the linkages between the two economies. Knowledge industries will be the most likely to benefit from the improved connectivity and to subsequently group into clusters designed to promote collaboration and efficiency.”

Fresno is also where you’ll find Tom Richards, the vice chair of the HSR Authority’s board of directors, interviewed by Site Selection magazine in fall 2013.

“I can’t foresee any reason at all why it won’t be built,” he said. “Whatever issues remain before us are issues that may have some minimal impact on timing but not on the viability of the project moving forward.”

Central to the HSR Authority’s plan is the transfer of work, exposure and liability to the private sector. The hope is to have the Madera-to-Bakersfield line complete by the end of 2017. “All funds for future construction must be committed for the project by the end of September 2017,” Richards said. “By 2022, a 300-mile-long leg should have revenue traffic.”

Richards noted that the visionary project was the dream of Gov. Jerry Brown during his first terms of office in the 1970s.

“He was discussing a bullet train back then,” Richards said. “If you go back to the late 1950s and early 1960s, his father Pat Brown was governor and it was envisioned for the first time then. We have been trying to help it evolve and serve a hugely larger population today. We will add a population the size of New York to California by the year 2050, and we are struggling to handle the surface transportation of all these people.”

That takes two forms: the well-known highway congestion in several major metros, and the congested short-haul air traffic within the state.

“For those who have to commute regularly between Northern and Southern California, it is a means to get there more conveniently — equal to airline speeds — without the hassle of going through airline terminals,” said Richards of the HSR vision. “There is nothing else on the horizon comparable to that.”

Richards sees the project as no less than revolutionary.

“I think it’s going to start a revolution for surface transportation in the country,” he said. “This really puts teeth in the idea of transportation-oriented development and intermodal networks.”

Even as high-speed builds momentum, there is plenty of supporting evidence for a “regular-speed” rail revolution in California. Simply hop on the train to places like Bakersfield, Anaheim and San Francisco.

The HSR Authority and the City of Bakersfield announced in September 2015 that they had entered into a station-area planning agreement allowing the city and the Authority to begin plans for a high-speed rail station in Bakersfield. The agreement allows both parties to study ways to promote economic development, encourage station area development and enhance multimodal connections between the station and the city. Other partner cities that have entered into similar agreements with the Authority include Fresno, Merced, Gilroy and Palmdale.

“This will be a very exciting and significant project that will provide an opportunity to not only shape how Bakersfield can best take advantage of a future high-speed rail station, but to also plan for the continuing revitalization of the entire downtown area,” said Bakersfield Community Development Director Douglas McIsaac.

The Anaheim Regional Transportation Intermodal Center — ARTIC for short — is Southern California’s newest transit hub. Located next to Angel Stadium of Anaheim and Honda Center, with the Disneyland Resort just a few miles away, ARTIC in August 2015 was named a 2015 Public Works Project of the Year in the Structures category by the American Public Works Association (APWA).

Back up north, in June 2015, Siemens increased its California business with a new order from San Francisco’s Municipal Transportation Agency (SFMTA) for 40 more light rail cars for its Muni transit system. Leveraging an option under the original 175 light rail vehicle order signed in September 2014, the 40 additional vehicles are part of the biggest Siemens order ever for light rail cars placed in the United States.

“The new Light Rail Vehicles (LRV) not only represents our long term partnership with Siemens but will place their proven superior technology on San Francisco streets,” said SFMTA Director of Transit John Haley. “The new vehicles are not only sleek in appearance but operate quieter on the rails and will last 10 times longer before significant maintenance is required. With more than 1,300 similar LRVs operating worldwide, the SFMTA is confident our forecasted 260 new vehicles will meet Bay Area transportation and economic needs.”

“Siemens is thrilled to extend its technology partnership with San Francisco and provide modern light rail trains to the more than 700,000 passengers who use San Francisco’s transportation system,” said Michael Cahill, president of Siemens Rolling Stock. “Hosting the mayor, future commuters and operators of this state-of-the-art light rail equipment to experience this important part of the design and production process is an exciting step in bringing these vehicles to San Francisco to enhance mobility in the city.”

In a way, HSR is simply bringing that enhanced mobility to an entire state — one fast train and one talented commuter at a time.

“In California,” concluded the economic impact report from Parsons Brinckerhoff, “HSR has the potential to help create a new economic geography.” 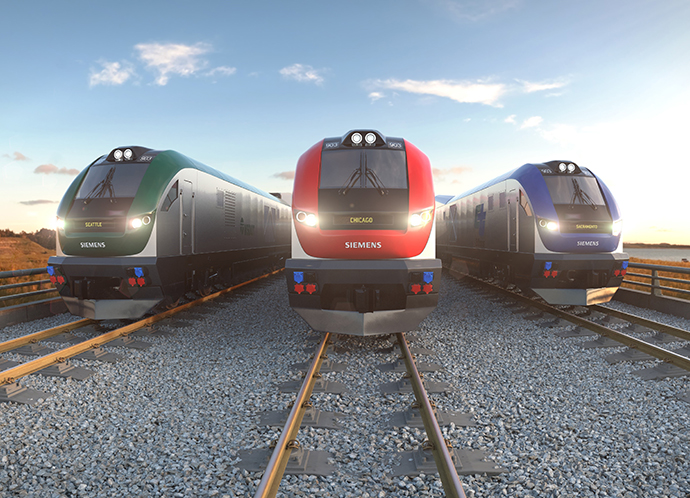 California was one of three states that awarded a $225-million contract to Siemens in March 2014 for the delivery of 32 diesel-electric passenger locomotives.
Rendering courtesy of Siemens