King of the Hill

How Mayor Johnson is turning big wins into big momentum for Sacramento. 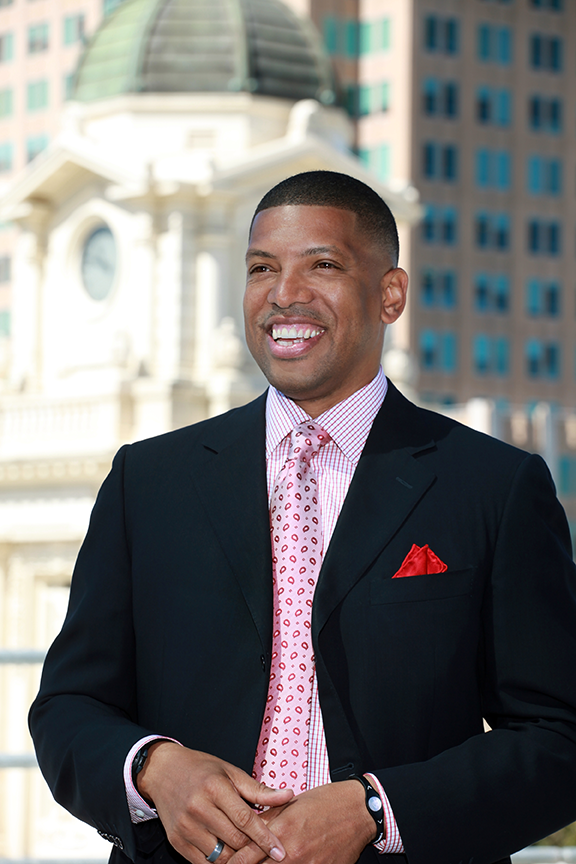 fter saving the Sacramento Kings and luring one of the nation’s top economic development leaders to the California state capital, what does a mayor do for an encore?

After winning approval to build the new $507-million Golden 1 Center for the Kings and convincing Barry Broome to leave Phoenix behind for the challenge of selling Sacramento, the 49-year-old Johnson is embarking on a new mission: positioning Sacramento as the next Austin.

Skeptics may scoff, but for Johnson, the first African American mayor in Sacramento’s 165-year history, it can’t be any more challenging than all 6-foot-1 of him dunking a basketball over top of 7-footer Hakeem “The Dream” Olajuwon – a feat he accomplished to the astonishment of NBA fans in 1994.

As the long-time point guard of the Phoenix Suns, Johnson made an All-NBA career out of “posterizing” big men like the famed Houston Rockets’ center. Today, the Sacramento native makes his living trying to convince business leaders both in and outside the state of California that the Golden State’s capital city is not only on the rise; it is winning.

“This city went through a very difficult period back in 2008 when I was first elected mayor,” Johnson says. “We were having serious budget deficits, and we were one of the leading cities in the nation in foreclosures. The Great Recession hit us very hard.”

But the city did not stay down and defeated, he notes. “We have since stabilized our budget at the local level, and we have our first surplus in seven years,” the mayor says. “Our economy is growing once again, and Sacramento is now on a roll. We are continuing to change the mindset about what can be accomplished here. For far too long we were over-reliant on government jobs and real estate. That is not the case anymore.”

Johnson says that the city has entered its “3.0 phase,” which he defines as the era in which Sacramento becomes “a hub of innovation and entrepreneurship.” He says that Greater Sacramento – a region of 2.4 million people in Northern California – is becoming a known leader in health care research, renewable energy and robotics.

“We want business leaders in other parts of the country to see Sacramento as the next cool city in America,” he says. “We are on our way toward competing with places likes Portland, Seattle, Denver and Austin. Our goal is nothing less than to become the next great American city.”

To accomplish that, the city must attain three goals, the mayor says:

Johnson says that “we want to be known as the easiest place to do business in California. We offer a low cost of living, we are the capital city of the state, and we are one of the most diverse places in the country. If you look at American cities on the move, we aspire to be one of them. We don’t want to be one of the best-kept secrets anymore.”

The mayor says that Sacramento’s world-class agricultural research at University of California at Davis “and our unparalleled food scene have put us on the map. We want more people to come visit us and come live here and work here so that they can take advantage of that.”

Applying lessons he learned as a player in the NBA, Johnson says he is a better political leader today because of his many years as a professional athlete. “When you play basketball, it is a contact sport,” he notes. “I did not realize when I first became mayor seven years ago that politics is also a contact sport. When you are a point guard, you have to articulate a goal to everyone on your team and then get them to buy into it. And you have to distribute the ball equally to your teammates. I have to do all of that now as mayor of Sacramento. Getting everyone to move in the same direction is something we had to do in order to secure the new arena for the Kings, and it is something we have to do every day to make this city better.”

Youth is Served in Sacramento

The one thing he wishes everyone knew about Sacramento, he says, is its abundance of youthful talent.

“Our workforce is younger than Seattle, San Francisco and San Jose,” says Johnson. “We have a higher percentage of millennials than San Francisco. One in three Sacramento residents speaks a second language. We are one of the most innovative and diverse cities in the country. It is a young and well-educated workforce. Any business executive who came here would see that and be more than pleased to hire them.”

What’s left to do? The mayor says that continued investment into infrastructure will pay the way for Sacramento to sustain its economic growth.

“All transportation hubs in Northern California go through our intermodal port,” he adds. “We are redeveloping our rail yard with all kinds of uses. The new Kaiser hospital and a Major League Soccer stadium are going up there; and UC Davis is building a third campus on that site. Another 1,000 housing units are being added to our downtown. Sacramento State University is expanding. Altogether, almost $4 billion in new development and improvements are occurring in our downtown. We are redefining our community, and it is time for the world to see it.”