The now tripled tax credit is giving production companies even more reasons to go back to Cali. 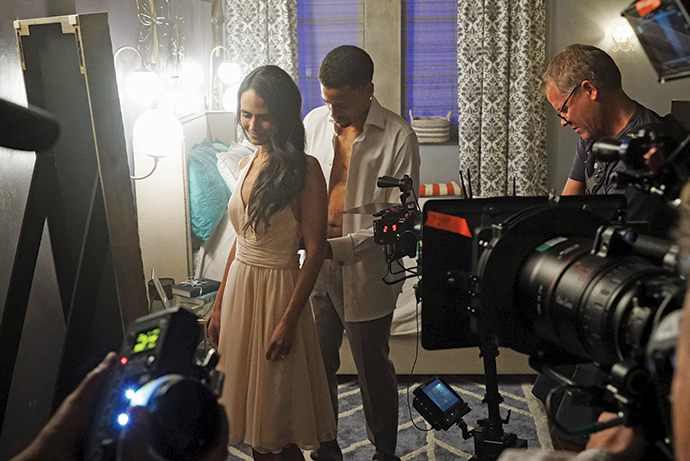 Secrets and Lies” actors Jordana Brewster and Michael Ealy with director Adam Arkin
Photo by Richard Cartwright/ABC
by CRYSTAL VILLARREAL
T he new California Film & Television Tax Credit is bringing film production back to Hollywood. This year Gov. Jerry Brown expanded the original $100-million annual budget for the tax credit to $300 million. For decades, California reigned over the television and film industry. But in the early 2000s several states and nations started offering tax credits, and the tale of runaway production across the state began to take a toll. Now that’s all about to change.

“Each movie or TV series is almost like a mini-factory. They’re opening a factory for each project, hiring a large number of workers, renting equipment and building sets,” says Amy Lemisch, executive director of the California Film Commission. “Just like any manufacturing, film and TV production is an economic driver, and we want to attract and retain as much of this production as possible.”

Production companies have a lot of options now that so many states offer tax credits for film and television. Each year, billions of dollars in film production spending is enjoyed by the state’s competitors; Louisiana, Georgia, New Mexico and Massachusetts all offer film incentives that are taking production away from the Golden State. Regardless of where a production company is headquartered, the location for each producation — just like a factory — can vary based on that project’s requirements.

Films, television shows and commercials being shot all over the state spend about $30 billion a year in California, half of that is payroll. The industry creates 160,000 direct jobs throughout the state. The impact on local economies is crucial. The budget for one television series could be anywhere from $25 million to $80 million a season. Depending on the size of production, companies can spend anywhere from $100,000 to $400,000 each day they’re shooting.

“That’s why it’s so important for us to retain these productions because it really does have a big impact, and it’s not just the direct hires,” says Lemisch. “Labor is typically half of a movie budget, and the other half is vendors. And it’s not just camera rentals or lighting. It could be a florist, a clothing store or groceries.”

From 2003 to 2009, California’s share of feature film production was cut nearly in half. But with these new incentives, the state can level the playing field for a fraction of what others are offering.

“Our program is very, very targeted to only specific types of productions, which are historically the most at risk of leaving, and those are feature films and scripted TV series,” says Lemisch. The new legislation was enacted in 2014, and the program became active in July 2015. The state was able to recruit several projects to relocate to California. HBO’s “VEEP,” which was based in Baltimore, “Secrets and Lies,” which was based in North Carolina, and “American Horror Story,” which was based in Louisiana, entered the program and moved their shows.

“We have a diverse range of looks, and producers really like that,” says Lemisch. “They also like the weather. It doesn’t rain a lot, and we have an abundance of highly skilled crews. And a lot of producers will tell you that there’s more efficiency in California. We’re set up for film production here. There’s so much experience with the facilities, the vendors and the crews.”

The new incentive programs also includes television projects that didn’t qualify before. Now three shows have relocated since May 2015, including ABC Television’s “Secrets and Lies.” The mystery anthology tells a different story each season, and the producers have really stressed the fact that they wanted to film in California.

“We base all of our decisions on the creative needs of the show while also being mindful of our financial responsibility and working within our budgets,” says Gary French, senior vice president of production for ABC Studios. “In general, we always prefer to stay in California because of the highly skilled workforce available here.”

The show just began shooting its second season at Paramount Studios in Hollywood. Barbie Kligman, executive producer for the show, recently said in a press release, “After shooting out of state last season, the California incentive has afforded us the amazing opportunity to bring our production home.”

Already successful, the new incentives have allowed the state’s legendary film industry to get back in the game it created.