Renewables play a major role in the progressive climate policies of California — and of its companies too. 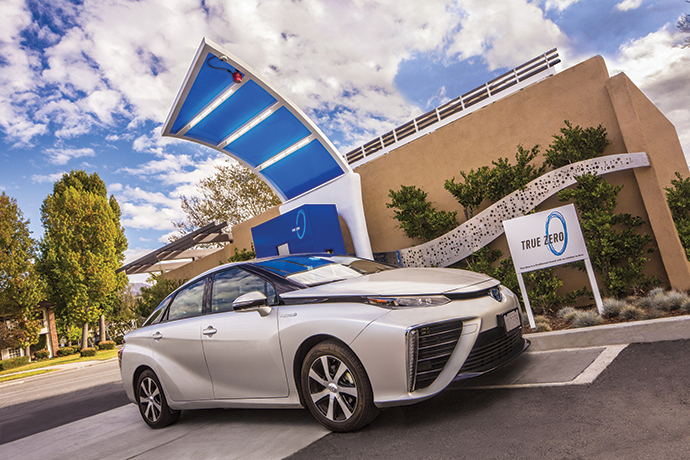 California’s renewables profile extends beyond solar. Here a Toyota Mirai refuels at a True Zero hydrogen station for fuel cell vehicles in California, where the Irvine-based company has committed to build 12 more stations thanks in part to $26.6 million in support from the California Energy Commission.
Photo courtesy of True Zero
by ADAM BRUNS

When California hosts the Global Climate Action Summit in San Francisco in September 2018, it will be with good reason. Few locations in the world can match the state when it comes to matching progressive energy and climate policy with actual behavior.

In fact, the future’s so bright, total solar eclipses can be cause for concern.

In September, the California Independent System Operator (ISO) reported that its power grid — which just happens to have the most solar capacity of any in the nation — weathered a 3,500-MW dip in output in just over an hour during the three-hour event on August 21 — and that’s not even counting the estimated 1,300 to 1,500 MW of “behind-the-meter” solar installations on roofs throughout the state. Much of the decline in solar generation was replaced with an increase in electricity imports, hydropower and natural gas power plants.

“The success of the market during the historic natural event illustrated the potential resiliency of power grids absorbing growing amounts of renewable energy,” said the ISO.

After the eclipse, solar output ramped up at a clip of about 150 MW per minute. With around 10,000 MW of utility-scale solar, and an estimated capacity of about 6,000 MW in rooftop installations, solar resources cover as much as 30 to 40 percent of the California ISO grid’s energy needs on some days.

Solar is a big part of California’s renewable power and climate leadership profile. But it’s just one part.

Already the state offers a laudable example. It’s big enough to be its own nation and to have consumed more than 7.6 quadrillion Btu in 2016 (second only to Texas), but U.S. Energy Information Administration statistics show California in 2016 was 49th in total energy consumption per capita.

The California Energy Commission estimates that in 2016 California’s electricity consumption was about 29% renewables — well on the way toward the goal of 50% by 2030.

Yes, the state still is the nation’s third-largest producer of petroleum, is home to 18 refineries, and accounts for one-fifth of the nation’s jet fuel consumption. But give it props for its renewable energy bona fides — including work at the Joint Center for Artificial Photosynthesis Energy Innovation Hub at California Institute of Technology to use controlled catalysis to convert carbon dioxide to liquid fuels with only solar added energy. Yes, you heard that right: Sunlight + CO2 = Fuel — if California’s researchers have anything to say about it.

Among other highlights in the states renewables profile:

In 2016, according to the EIA, California ranked third in the nation in conventional hydroelectric generation, second in net electricity generation from all other renewable energy resources combined, and first as a producer of electricity from solar, geothermal and biomass resources.

The Solar Energy Industries Association (SEIA) reports that the state is No. 1 in total solar power installed (19,671 MW), with more than 5 million homes powered by solar energy. Solar accounts for 14 percent of total power generation in the state.

The state has welcomed more than $51 billion in solar investment, and the fall of prices by 55 percent over the past five years only signals more on the horizon: The SEIA projects 14,272 more MW will be installed by 2021 (yeah folks, that’s No. 1 too).