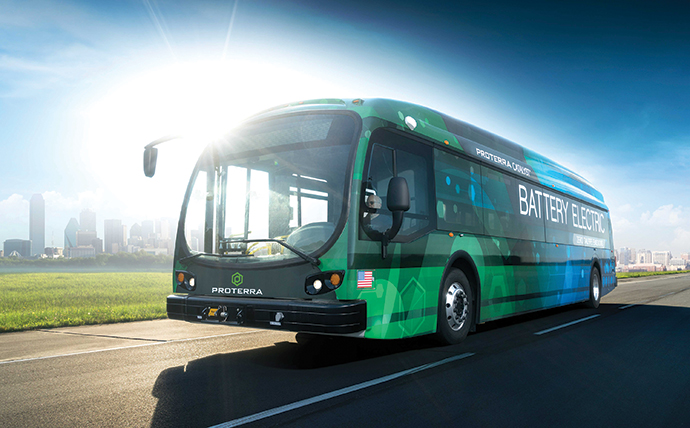 Proterra electric bus made in the City of Industry.
Photos courtesy of Proterra
by RON STARNER

When it comes to supporting innovation that improves quality of life and helps save the planet, California puts its money where its mouth is.

Under the unique California Competes Tax Credit program, the state announced April 11 that it had approved $70 million in tax credits for 35 companies that are projected to create 4,221 jobs and make $1.74 billion worth of new investments across California.

One of the recipient firms, California Ethanol & Power LLC (CE&P), was awarded a $10 million tax credit that will help the company establish a brand-new green power plant. “We appreciate that the state recognizes our commitment to infusing thousands of sustainable jobs in a community that experiences some of the highest unemployment rates and lowest economic health ratings in the United States,” said David Rubenstein, president and CEO of CE&P. “CE&P will produce much-needed ultra-low carbon energy to contribute to California’s goals of reducing greenhouse gas emissions.”

The California Competes program is designed to encourage innovative businesses to invest in California to create new jobs and stimulate economic development. Since the inception of the program in 2013, the California Governor’s Office of Business and Economic Development (GO-Biz) has allocated $899 million to 1,009 companies that are projected to create 99,360 new jobs and make $19 billion in new investments.

CE&P was one of many projects that were evaluated by GO-Biz based on factors required by state law, including total jobs created, total investment, average wage, strategic importance, economic impact and more.

“The California Competes Tax Credit continues to encourage companies from around the world to locate, expand and add good-paying jobs in our state,” said Lenny Mendonca, Chief Economic Advisor to the governor, GO-Biz director, and chair of the California Competes Tax Credit Committee. “It is exciting to see the growing trend of employers taking advantage of the workforce opportunities in the Central Valley and Inland Empire. As this administration strives toward an economy that works for all Californians, we look forward to helping businesses expand beyond the coastal areas and grow in all regions of the state.”

Over the years, tax credits have been awarded to companies such as General Motors, Tesla, Northrop Grumman Systems Corporation, Red Bull North America and others. In the case of smaller firms, many of them said the assistance from the state was indispensable. “The California Competes Tax Credit we were just awarded gives us the ability to invest back into the company by hiring staff, buying equipment, and offering additional services to our customers,” said Mina Doshi, president of INTA Technologies.

The state has made it a top priority to fund projects that promote a cleaner environment. Last year, then-Gov. Jerry Brown issued an executive order directing GO-Biz to help local and regional governments increase zero-emission vehicles and fund new climate investments. These include plug-in stations, greenhouse gas reduction and climate resiliency projects. The governor pledged $2.5 billion toward this program.

But that’s not the only way in which California helps local companies grow. The California Film Commission’s Tax Credit Program 2.0 is reinvigorating Hollywood and bringing even more big- and small-screen projects to the Golden State. The $1.55 billion program runs for five years, with a sunset date of June 30, 2020. Each fiscal year, from July 1 to June 30, $330 million in state funding is earmarked for TV projects, relocating TV, independent features, and non-indie features.

Advanced Manufacturing Gets Some Help

The California Alternative Energy and Advanced Transportation Financing Authority (CAEATFA) offers a full sales and use tax exclusion to manufacturers that promote alternative energy and advanced transportation, while the IBank established the California Lending for Energy and Environmental Needs (CLEEN) Center to offer financing to public agencies and non-profit corporations to help achieve the state’s greenhouse gas reduction goals and increase market confidence in green investing.

On top of these programs, GO-Biz goes out of its way to help small businesses thrive. For example, in late 2018, GO-Biz announced grants to 84 recipients of the California Small Business Technical Assistance Expansion Program. The state’s $17 million in new grant funding was allocated to technical assistance centers serving traditionally underserved business groups, including women, minority and veteran-owned businesses and businesses in low-wealth, rural and disaster-impacted communities.