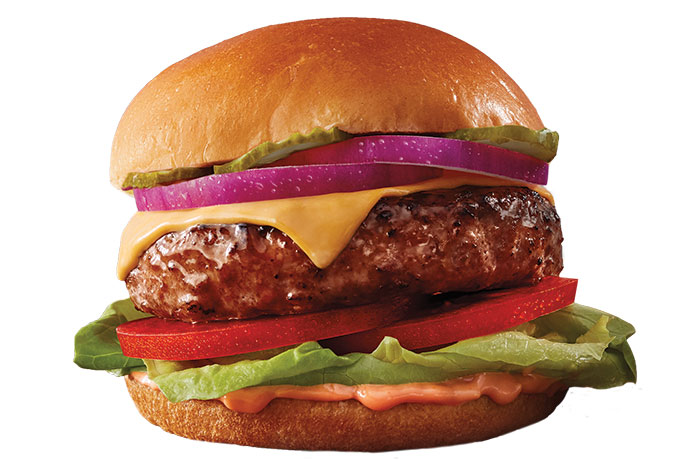 The Beyond Burger is the signature offering of El Segundo-based Beyond Meat.
Photo courtesy Beyond Meat
by Gary Daughters

Visit your local grocery, and much of what you’ll see in the produce section and the canned food aisles came from California. Whether peaches, walnuts, almonds, raisins or artichokes; pomegranates, prunes or strawberries, California’s vast land and sunny climate are optimally suited for growing food.

With 76,400 ranches and farms, California produces about 12% of the nation’s market value of agricultural products sold. In California, agriculture is a $54 billion industry that generates at least $100 million in related economic activity. Simply put, California is the agriculture super-state.

Traditionally characterized by yield-enhancing technologies such as drones, IoT-based sensor networks, satellite photography and artificial intelligence, Agtech, in recent years, has edged closer to the dinner table with innovative food-science products such as plant-based meat substitutes, a market expected to grow to more than $21 billion by 2025. That growth is being spurred by global consumers who are increasingly health conscious and increasingly wary of greenhouse gas emissions in the animal meat industry.

El Segundo-based Beyond Meat has become the global poster child of the plant-based protein movement. Founded in 2009 by entrepreneur Ethan Brown, a vegan with a taste for fast food, Beyond Meat produces plant-based products created to emulate beef, chicken and pork sausage. The company is one of the country’s fastest-growing food concerns in the United States, following a record-setting initial public offering in May 2019. It sports a market cap of $9.5 billion.

“All over the world, entrepreneurs are reinventing how we make products we’ve traditionally derived from animals.”

“The use of science and technology to build meat directly from plants, coupled with a commitment to all natural and non-GMO ingredients, is the core of our company,” says Brown. “At Beyond Meat, we strive to understand meat at new levels, and then rebuild it using amino acids, lipids and minerals from plants. What the animal has done throughout history — organize plant material in the form of muscle or meat — we believe we can to more efficiently to the benefit of human health, environment and animal welfare.”

Beyond Meat’s burgers and sausages are sold at retailers like Costco and Walmart. In September 2020, the company announced a tripling of its distribution arrangement with Walmart from 800 stores to 2,400 stores. After successful pilots in the Southeast, Beyond Meat and Kentucky Fried Chicken offered their Beyond Fried Chicken collaboration to more than 50 KFC restaurants in Los Angeles, Orange County and San Diego.

“The flavor of Kentucky Fried Chicken is one that has never been replicated, until Beyond Fried Chicken,” said Andrea Zahumensky, chief marketing officer, KFC U.S.

San Francisco-based AgFunder, one of the world’s most active Ag Tech venture capital funds, has gone all in on plant-based protein. In 2019, it launched a dedicated, $20 million fund to invest in animal protein alternatives.

“All over the world, entrepreneurs are reinventing how we make products we’ve traditionally derived from animals,” wrote AgFunder founder Rob Leclerc in a letter to investors. “Even if they’re moderately successful, they’ll have an opportunity to capture a meaningful portion of the $2.17 trillion animal products market Opportunities don’t come much bigger than that.”

Alpha Foods, an AgFunder portfolio company based in Glendale, was one of the world’s 10 highest-funded innovative food startups in the first half of 2020, having raised $28 million in a February funding round. Launched in 2015, Alpha Foods manufacturers lines of burritos, tamales, pizzas, burgers and sausages. Its products are sold in over 9,000 stores including Wegmans, Walmart, Kroger and Publix.

“The passion and talent we see in this industry is second to none, and it makes innovation in this space move so much faster,” says Leclerc. “These are mission-driven founders who are out to make a big dent in the universe.”