California sets the standard for the country and the world. 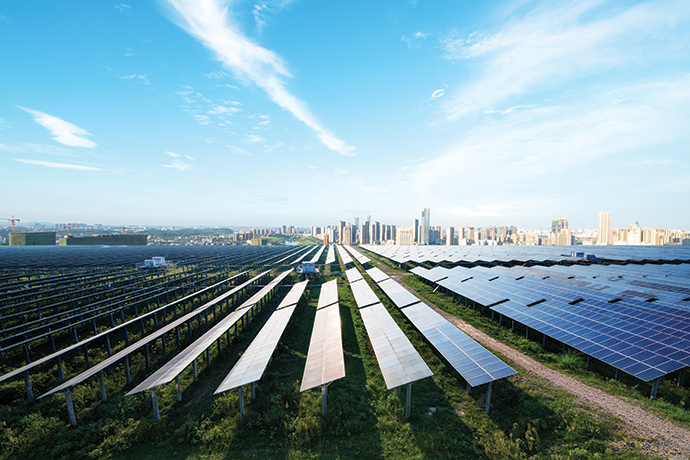 No state comes close to California when it comes to solar energy.
Photo: Getty Images
by GARY DAUGHTERS

It is one thing to set ambitious goals. It is something else to meet them. In its pursuit of clean energy, California has won-over skeptics by not merely meeting but exceeding the lofty targets it has set for itself over the course of two decades. Far from resting on its hard-won successes, the state continues to set the bar even higher.

California’s landmark Renewables Portfolio Standard (RPS), established in 2002, set a goal of 20% renewable energy by 2017. Momentum in solar and wind power soon allowed the state to move the target-year back to 2010. Fast-forward to 2018, when California achieved its goal of 33% renewable energy two years early. It promptly established targets of 50% renewables by 2026, 60% by 2030, and 100% carbon-free energy (including wind, nuclear, biomass, hydro and geothermal) by 2045. As of publication, most utilities have already met their 2020 targets and are closing in on goals for 2030.

“California’s Renewable Portfolio Standard is the cornerstone of our state’s climate policy portfolio, delivering essential greenhouse gas reductions and increasingly cleaner energy to every Californian,” says David Hochschild, chair of the California Energy Commission. “As we move to 100% clean energy by midcentury, our success shows what’s possible and demonstrates that renewables are now mainstream and fossil fuels are now becoming the alternative energy.”

By achieving and even surpassing such elevated goals, California is setting a marker for others to match and creating ripples throughout the energy industry. That applies, too, to building standards, says Scott Knox, chief data scientist for Measurabl, a San Diego-based energy efficient buildings firm.

“California is a vast market, so regulation here not only compels buildings within the state to act, but it has a knock-off effect where owners of multistate real estate portfolios like CBRE Global Investors, BlackRock, Boston Properties and AvalonBay to begin to apply best practices from regulated states like California across their entire portfolio.”

Solar: You Ain’t Seen Nothing Yet

According to the California Energy Commission’s (CEC) latest update, the state’s installed renewable electricity capacity totaled an estimated 34,112 MW for 2019, up 14% in a year. That total includes nearly 9,460 MW of solar BTM capacity (solar energy generated at or near the point of use) from homes and businesses throughout the state. Large-scale renewables, the Commission reports, make up about 60% of total statewide capacity in 2019 or 19,950 MW. The figure rose 12% from 2018.

Solar power is the state’s renewables leader, and by a lot. As of the second quarter of 2020, California had 28,472 MW of installed solar capacity, more than four times as much as the nation’s second-leading solar state, according to the Solar Energy Industries Association (SEIA). Solar, including BTM, accounts for one-half of the state’s renewables portfolio according to CEC, with enough installed capacity to power nearly 8-million homes. All told, solar now accounts for some 20% of all electricity produced statewide. 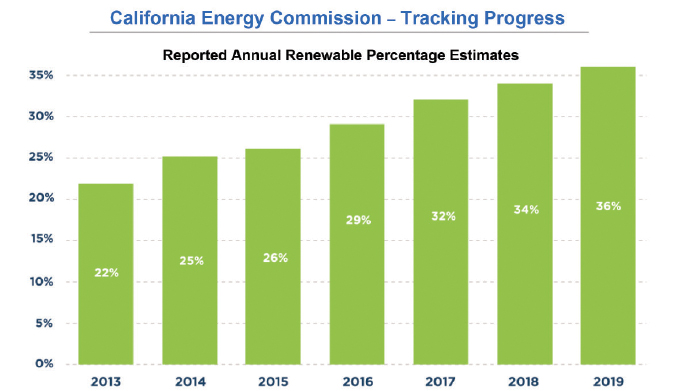 Seven of the nation’s 10 biggest solar farms are set in California. They include Solar Star, the country’s biggest, spread out across more than 3,200 acres in Kern and Los Angeles counties. Operated by SunPower Services, the giant installation generates nearly 600 MW of energy, enough to power a quarter-million households.

With dozens of solar projects presently in the pipeline, SEIA estimates that California will increase its solar capacity by 16,000 MW over the next five years. Los Angeles-based 8Minute Solar Energy is planning projects across the Southwest totaling some 18,000 MW, including the 400 MW Eland Solar & Storage Center in Kern County, which the company bills as the lowest-cost solar and energy storage project in the country.

“The Eland project demonstrates,” the company says, “that renewables can replace dispatchable fossil fuel generation at a price of under 4 cents per kilowatt-out fixed for 25 years, effectively reducing the cost to ratepayers and increasing grid flexibility.”

Bring it All Home

In the first half of 2019, California surpassed a goal of installing solar photovoltaic (PV) systems on 1-million roofs throughout the state. CEC estimates that, in recent years, California has doubled the number of rooftop installations every two or three years.

Under a mandate that took effect in January 2020, California became the first state in the nation to require all new construction homes to have a PV system as an electricity source. The code applies to both single-family homes as well as multistory homes up to three stories high. Under the mandate, the solar system must be large enough to meet the annual electricity for the dwelling, with offsets for community solar projects and construction that incorporates battery storage. The new building code incentivizes efficiency upgrades expected to collectively slash energy use in new homes by more than 50%.

While CEC predicts that upfront costs of new homes will increase, the savings benefits for new homeowners are projected to outweigh the initial solar investment. The state projects the mandate to add $40 per month to an average mortgage payment, but to lower monthly electricity costs by $80, for a net month savings of $40, or nearly $500 per year.