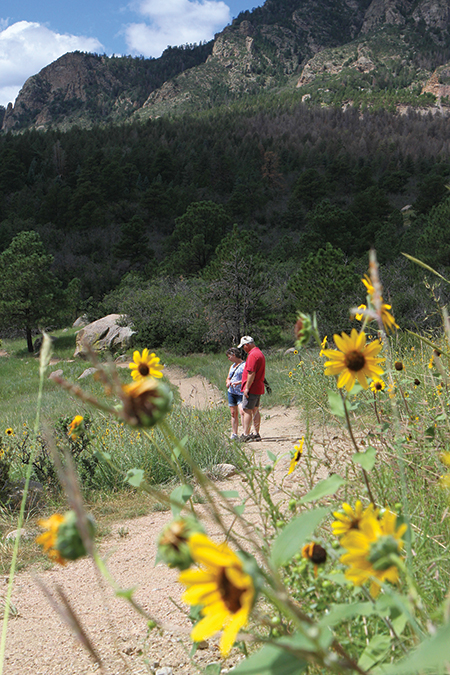 The Cutler Mountain Trail in Cheyenne Canyon in Colorado Springs is one of hundreds being mapped statedwide.
Photo by Thomas Kimmel courtesy of Colorado Parks and Wildlife

It’s easy to hit the trail in Colorado.

“In Colorado, we’ve always been trailblazers.”

So said Governor John Hickenlooper in his state of the state address in January 2017, alluding to the prospect of states shouldering more responsibilities in the future. But he could have just as easily been referring to literal trails.

Exactly two years previous, from the same podium, he announced the Colorado the Beautiful initiative. The effort to grow, enhance, connect and market statewide outdoor recreation resources includes a very concrete target: a map of the entire state’s trails, open spaces, parks and protected lands, targeted toward a vision of every Coloradan living within 10 minutes of such spaces within a generation.

The Colorado Trail System (CTS) represents the first step in building such a tool, and it’s well on its way to reality with its first phase connecting 16 priority trails. Ultimately it will pull together over 20,000 miles of trails managed by more than 100 local, state and federal agencies. And leaders across all facets of state government know how important such outdoor resources are to attracting and keeping companies and talent.

“I was just talking to one of our park rangers about this,” says Lauren Truitt, public information and website manager within Colorado Parks and Wildlife’s (CPW) information and education branch. “Google just purchased some land outside Boulder, and one thing they’re selling is that outdoor experience for people who would move here to Colorado. Our calling card, our natural allure, is that special access to our natural resources.”

Indeed, connections to the outdoors are intrinsic to Google’s plans for an expanded engineering hub campus in Boulder. “Great lovers of the outdoors, we grow produce in our on-site garden and practice our moves on a two-story indoor climbing wall,” the company says in its online description of the hub. Even as the new campus is going up, the company is leasing 30,000 new sq. ft. nearby because of its rapid growth. While the Google team comprised around 340 people in early 2016, the new two-phase campus will hold as many as 1,500, all of whom will have quick access to one of the nation’s busiest Whole Foods Markets across the street.

“Leveraging the site’s amenities, the landscaped urban campus ties the existing tree-lined waterway with views to the Front Range to become a special place where creative and collaborative work can occur in a natural setting,” says a flowery description of the project by Denver-based Tryba Architects. “Ease of access and strong connections to multimodal transit, large-scale mixed-use developments and network of recreational trails enables Google’s future workforce to take advantage of the campus’s adjacencies.”

All these adjacencies may sound too good to be true. But they are true. The latest evidence that Google knows what it’s doing when it comes to healthy places came in September 2017, when the new Community Rankings for Exercise from Gallup and Sharecare ranked Boulder No. 1 for highest level of regular exercise in the nation, with 69.6 percent of respondents saying they’d exercised for 30 minutes or more on three or more days in the prior week.

Think all the healthy Coloradans are in Boulder? Think again. Fort Collins is No. 2 (67.9 percent) and Greeley is No. 4 (65.3 percent). Colorado Springs — perhaps aided by its high cohort of Olympic athletes in training — is 12th (60.7 percent) and Denver-Aurora-Lakewood is 19th (58.3 percent).

To recap: Five of the top 20 among 189 US cities are in one state. Which makes the CTS project all the more meaningful, and reinforces Lauren Truitt’s gut instinct that access to the outdoors brings economic value in all sorts of ways, from housing prices and reduced health care and welfare costs to the dollars from tourism and local staycations. The exercise rankings don’t surprise the Colorado native.

“I always talk to people about the fact that our outdoors are why natives stay here, visitors come here and people move here,” she says.

“We have high public land access,” she says, an intentional policy that the Colorado the Beautiful program is only going to increase by literal leaps and bounds, in both urban and rural spaces. “It’s a very ambitious goal,” she says, “but one that Colorado is a natural leader to pursue.”

The CTS program also is a great illustration of area government collaboration in microcosm, bringing together park managers and leaders from Colorado Parks and Wildlife, the state’s departments of transportation and natural resources, the US Forest Service and the federal Bureau of Land Management, which maintained their back-end trail data in different formats. Normalizing that data from the state’s more than 220 trail managers — including city parks and rec departments — has been a time-consuming but worthy task, says Truitt.

“We put out the call for trail submission, and we got 90 trail managers to submit data on that first go-round,” she says. That first tranche of information allowed the team to test-drive the process in terms of both back-end organization and public delivery of the information. The latter is taking place via the Colorado Trail Explorer (COTREX), a mobile-friendly web platform that in its first two days of availability was accessed by about 55,000 people.

The mapping effort already has covered 39,000 miles of trail in its first phase, even with another 120 trail managers to get through.

But Truitt reminds us that the goal is not to look at the app. It’s to look and move around.

“We have this technology, and it’s fantastic,” she says, “but you still need to have that soul-gripping, awe-inspiring experience that can only happen out on the trail and in nature. Most people find that you get to these spaces and you almost feel the weight come off your shoulders. Even at the playground down the street, it allows you to disconnect. It’s huge for mental health and to regain composure.”

The focus on mapping the trails has had its own ripple effect, as planners and leaders consider how doses of the outdoors can positively impact such areas as medical practice (green therapy) and real estate development, with home-hunters seeing a lot more planned communities with miles of trails, ponds and campgrounds.

Truitt has known the value of such surroundings since her childhood in Colorado Springs.

“One of my favorite trails is the Mount Cutler Trail in North Cheyenne Canyon,” she says. “My dad and I would wake up at five in the morning and go do that trail before school.” She’s also partial to Cherry Creek State Park, and to the river trail in the Grand Junction area in western Colorado, a region known for its superior mountain biking.

It’s hard to pick favorites when each place has its unique charms, she says. But they all reinforce one common message that seems to be getting through to people and leading employers in Colorado:

“We’re meant to be outside,” Truitt says. 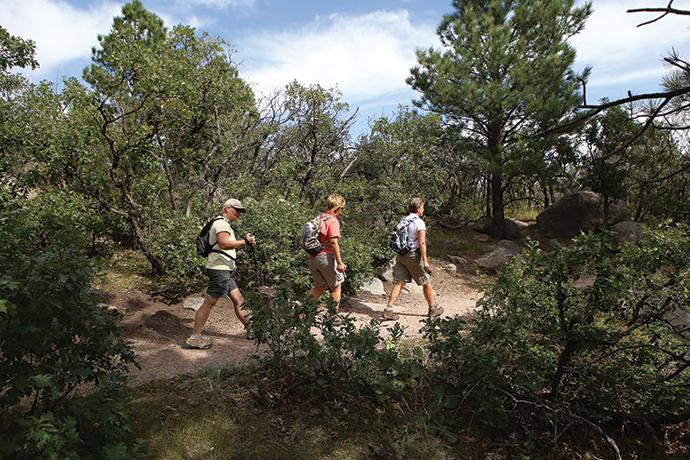 Photo by Thomas Kimmel courtesy of Colorado Parks and Wildlife