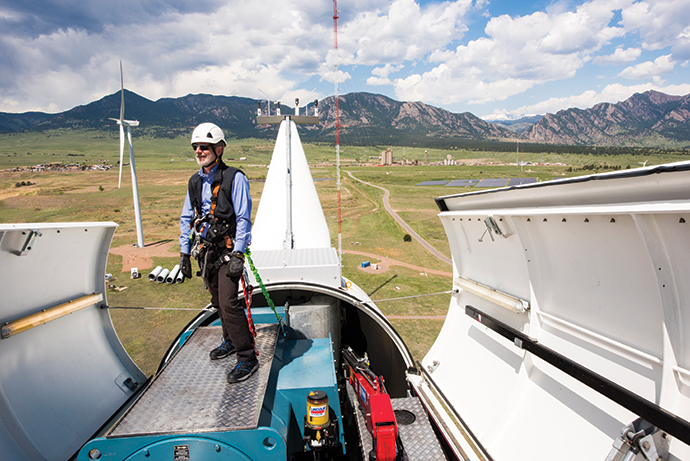 The South Table Mountain campus of the U.S. Department of Energy’s National Renewable Energy Laboratory, which celebrated its 40th anniversary in 2017
Photo courtesy of NREL
by ADAM BRUNS

how can a state ranked sixth and seventh in production of natural gas and oil, respectively, also be home to the world-leading National Renewable Energy Laboratory? How does an oil and gas sector that employed 233,000 and contributed more than $31 billion to the state economy in 2015 feel at home in the same territory that requires investor-owned utilities to acquire 30 percent of their power from renewables by 2020?

Very comfortably, it turns out. Two recent projects demonstrate why.

In late 2016, Houston-based BP’s U.S. Lower 48 onshore business announced it would establish its 200-employee headquarters in Denver to be closer to its substantial asset position in the Rocky Mountain region and what it called “an important energy hub of the future.”

“In some ways, this is a homecoming for us,” said David Lawler, CEO of BP Lower 48, in reference to the past presence of BP legacy companies in Colorado. “With two-thirds of our operated oil and natural gas production and proved reserves in the Rockies, world-class universities nearby and a wealth of industry expertise in the region, Denver is a logical and strategic place for us to be and a natural fit for our business.” Lower 48 onshore operations span five states and seven oil and gas basins. The Lower 48 unit is the largest operator in the Colorado side of the San Juan Basin, where the company’s business interests in 1,300 wells span more net acres than a city twice the size of Denver.

In early 2016, Envision Energy — the second-largest wind turbine company in China, employing more than 1,000 and managing over 50 gigawatts of assets worldwide — announced the establishment of its Global Blade Innovation Center in Boulder, Colorado, to complement a global digital innovation lab in Silicon Valley and a digital energy research center in Houston. The new site is headed by Kevin Standish, the former chief engineer of blades at Siemens Wind in the U.S., which has its own robust presence in Colorado.

“The sustained trend in the wind industry towards increasing larger turbine rotor sizes and power ratings demands that turbine designers make simultaneous advances in aerodynamics, loads, controls, acoustics, structure, materials and manufacturing excellence,” said Standish at the announcement. “Our priority is to hire the best engineers from wind, aerospace and other high-tech industries to build up a top-notch team of engineering competence and capability here in Boulder.”

Envision more recently has embarked on an “Energy IoT and Smart City Technology Alliance” with Microsoft, Accenture and other partners, with an initial focus on China. But the effort has more than a little in common with Colorado’s own smart city plans at Peña Station Next, a self-sufficient community near Denver International Airport that embraces smart technology, community, clean energy, and mobility. The development will not only produce its own energy but also store that energy to move toward a completely redundant power grid. The development is committed to harnessing Panasonic’s CityNow technology and independent energy systems. Area developer L.C. Fulenwider, Inc., the airport and Panasonic Enterprise Solutions Company have led investment in the development, with Panasonic committing to a major presence in the area a few years ago. Meanwhile, the U.S. Department of Energy’s (DOE) National Renewable Energy Laboratory (NREL) is partnering with Panasonic and Xcel Energy to simulate and optimize the energy load profile of the 382-acre development.

All of the above were scheduled to be on full display in October 2017, when Peña Station played host to the DOE’s Solar Decathlon competition, where 12 collegiate teams from around the world test how well they did in building solar houses featuring the latest in energy-efficient design, smart home solutions, water conservation measures, electric vehicles and sustainable buildings. Linda Silverman, Solar Decathlon director, has been with DOE for nearly 30 years, and has Denver connections, having earned her bachelor’s degree in finance at the University of Colorado. She’s seen the area evolve to becoming a national sustainability leader.

“I remember looking toward Denver and seeing the brown cloud,” she says of the region’s past pollution, which led people to see energy as a dirty industry. NREL’s establishment in 1977 began to turn things in a new direction. Its presence was just one factor leading DOE to bring its Solar Decathlon to town. In addition to having a big enough venue, a strong family of universities and a strong media market, Silverman says, Denver is a place “where people are really interested in energy efficiency, renewable energy and innovative building.”

A 2012 study of eight years’ worth of Solar Decathlons found that 16 percent of students on the competing teams had started their own clean energy firms, and 76 percent were employed in the overall clean energy field. Silverman says 15 years of competitions has spurred her team to launch a Solar Decathlon alumni association. That sort of select global community has a lot in common with the corporate and higher education communities of Colorado. Silverman says NREL, the Colorado School of Mines, her alma mater in Boulder and the University of Denver (a collaborator with a UC-Berkeley team at the Decathlon) contribute to a critical mass of energy experience in the state.

Meanwhile, the real-life lab at Peña Station — situated on the University of Colorado A line commuter rail network linking downtown Denver and the airport — is taking things to the next level. Linda Silverman calls Peña Station a particularly compelling site because its smart-city aspirations mesh so well with the vision of the event, i.e. exploring new ways of living and working with energy consumption in mind. A solar-powered parking lot is already in place for the event, taking advantage of the state’s more than 300 sunny days a year.

“So people can see the future,” she says, “right there.”