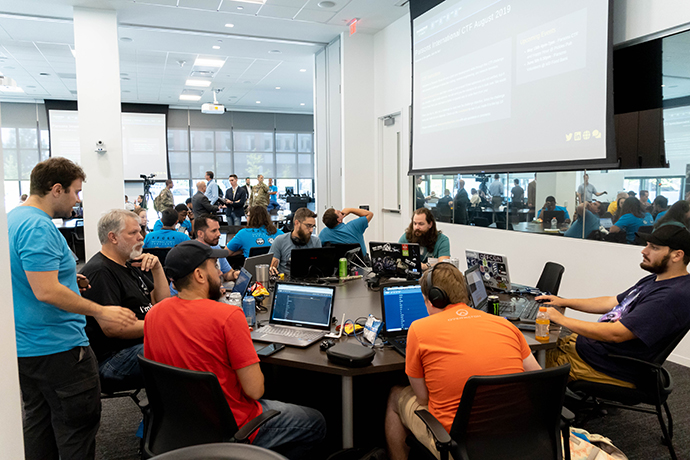 Security and risk management content provider CSO, a unit of IDG Communications, includes Augusta on its 2019 list of the top 10 global cybersecurity hubs. That list includes such heavy hitters as New York City; the Washington, D.C. metro area; Maryland; the San Francisco Bay Area; and Israel. Augusta is punching above its weight to be sure, but a closer look reveals why it belongs on that list.

In July 2018, the Georgia Cyber Center’s Hull McKnight building had its grand opening. This building is the first part of the $100 million cybersecurity facility located on the Nathan Deal Campus for Innovation. Former Governor Deal initially announced a $58 million investment for a new cyber training center in January 2017.

The 167,000 sq. ft. building is designed to bring together academia, private industry and government to establish cybersecurity standards across state and local agencies to develop and practice protocols for responding to cyber threats. The center has been strategically constructed in the city of Augusta to share the location with the U.S. Army Cyber Command headquarters, the central post for all the Army’s cybersecurity operations.

The Georgia Cyber Center is a unique public-private collaboration that includes Augusta University, Augusta Technical College, the University System of Georgia’s (USG) research institutions, the Technical College System of Georgia (TCSG), the City of Augusta, the Georgia Bureau of Investigation (GBI), the Georgia Department of Defense and other state, federal and private-sector partners.

“The protection of Georgia’s citizens, businesses and institutions in the digital realm is becoming significantly more necessary as cybercrime continues to grow,” said Gov. Deal at the opening ceremony. “Building on our efforts to keep Georgia safe and maintain its status as the No. 1 state in which to do business, we are taking action to ensure that Georgia leads the way on cybersecurity.”

The initial building was fully leased before construction was finalized, and continued demand warranted a second building. The state provided an additional $35 million in funding, and the city of Augusta contributed an additional $12 million, for the construction of another 165,000 sq. ft. facility, which opened January 10, 2019. Total square footage of the campus is 330,000, with a total investment of $105M. The second facility serves as an incubator hub for technology startups as well as a training space for the state’s cybersecurity initiatives and workforce development programs. The facility is responsible for training all of Georgia’s 85 state departments in cybersecurity, and supports innovative companies focused on developing new technologies through partnerships.

Perspecta Inc., a leading U.S. government services provider, held a ribbon-cutting ceremony at its new facility in the Georgia Cyber Center on Oct. 6. The office is strategically located close to Perspecta’s U.S. Army Cyber Command (ARCYBER) customer, headquartered nearby at Fort Gordon. With the move to Augusta, Perspecta will create 178 job opportunities in support of ARCYBER’s headquarters relocation from Fort Belvoir in Virginia.

Only 45 universities nationwide have received designations in both cyber defense and education, and through this special program, students and faculty are eligible for scholarships and grants through the Department of Defense Cyber Scholarship Program and the Federal Cyber Service Scholarship for Service Program, as well as funding opportunities from other sources such as the National Science Foundation.

The National Centers of Academic Excellence program was established by the NSA in 1999 to reduce vulnerability in the nation’s information infrastructure by promoting higher education and research in cyber defense. With the designation, colleges and universities are formally recognized by the U.S. government for their robust cybersecurity-related programs.

SOFTACT Solutions, LLC (STS) announced in March the opening of a principal office in the Shaffer MacCartney Building of the Georgia Cyber Center. Committed to helping create the ecosystem that is required to make the Fort Gordon Cyber district a nationally recognized destination for Cyber talent and innovation, STS has embraced the idea of true partnership with academia, industry, and government by partnering with Augusta University, the Georgia Cyber Center and the Alliance for Fort Gordon to create an environment necessary to cultivate local talent for the cyber workforce and drive a culture of innovation and entrepreneurship while simultaneously meeting the needs of our government partners both regionally and nationally.

In October 2019, Parsons Corporation, a leading cybersecurity technology provider, announced plans to expand its operations at the Georgia Cyber Center by adding more than 80 new jobs. The expansion is the result of Parsons’ growing cyber business as U.S. Army Cyber Command at Fort Gordon continues to promote the growth of the industry in Augusta. Parsons initially announced a presence there in August 2019.

In August 2019, BAE Systems opened offices in the Georgia Cyber Center, growing its presence in Augusta and furthering its commitment to innovation. The company values the area’s highly skilled workforce and proximity to key customers. “We’re incredibly excited about our partnership with the Georgia Cyber Center and continuing to grow our workforce in the Augusta and Ft. Gordon areas,” said Peder Jungck, vice president and general manager of BAE Systems’ Intelligence Solutions business. “The potential for collaboration, innovation and mentorship that comes from sharing a campus with some of the brightest minds in cybersecurity today is truly limitless.” The company currently has more than 400 employees in Fort Gordon and Augusta providing advanced analytics and information assurance mission support.