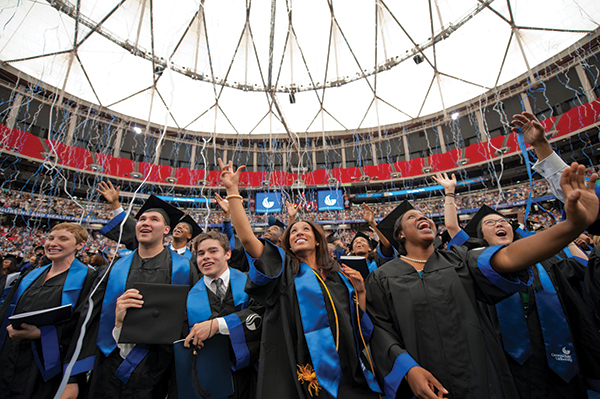 Georgia’s robust networks of higher learning are keeping the state’s talent pool flowing. With a labor force of 5.2 million, businesses in Georgia have access to highly skilled and educated employees. The state’s 85 accredited public and private universities award more than 132,000 degrees and certificates each year, while its 22 technical and community colleges enroll more than 143,000 students each year.

The University System of Georgia is composed of 26 higher education institutions including four research universities. The system awarded 70,879 degrees in FY2020, including 42,500 bachelor’s, 14,000 masters and 1,759 doctorate degrees. Across the system, more than 341,400 students enrolled in Fall 2020.

“Our mission to provide a world-class education to our students and support them toward graduation and degree attainment starts with the amazing work done by our institutions to maintain quality academic programs,” Acting Chancellor Teresa MacCartney said.

“Those programs are recognized as not just the best across the South but in the nation, and the result is a strong educational foundation that helps both our students and Georgia succeed,” she said.

Funded by the Georgia Lottery Corporation, the HOPE Scholarship Program was created in 1993 by former Governor Zell Miller. HOPE continues to be one of the most generous scholarship programs in the country and has served as a model for state financial aid programs around the country.

A high school graduate must have a minimum 3.0 GPA to qualify for the HOPE Scholarship which pays 90% of all tuition costs at a Georgia state college or university. To receive the Zell Miller Scholarship, which covers 100% of tuition costs, a student must graduate from a Georgia high school with a 3.70 GPA or higher.

“The HOPE Scholarship Program has been a game-changer for our state and helped over 2 million Georgia students achieve greater opportunity,” said Governor Kemp. “With more than $12.6 billion awarded, HOPE has allowed Georgia students to pursue education beyond high school and laid the foundation for Georgia’s recognition as the number one state for business for eight years in a row.”

Columbus State University ranked No. 35 among top public regional universities in the South and No. 74 overall, including private institutions. CSU also ranked No. 46 in social mobility.

Dalton State College, Georgia’s first and only federally designated Hispanic-Serving Institution, ranked No. 21 in social mobility and made the list for best regional colleges in the South.

Fort Valley State University is Georgia’s No. 1 ranked HBCU for the fourth year in a row. It is ranked No. 38 among HBCUs in the nation, and in the top 10 in social mobility.

Georgia College and State University ranked No. 9 among top public regional universities in the South and No. 21 overall, including private colleges.

Georgia State University ranked No. 2 in both the most innovative and best undergraduate teaching categories. GSU ranked No. 6 for first-year student programs, No. 5 for learning communities, No. 11 in social mobility and No. 13 in diversity. The J. Mack Robinson College of Business ranked No. 49 in the nation in the undergraduate business programs category, with its Risk Management and Insurance program No. 4 and Computer Information Systems program No. 8.

Gordon State College ranked in the No. 21 – No. 27 tier in the Top Public Colleges Category and No. 71 – No. 93 in the Regional Colleges – South Category.

Middle Georgia State University ranked No. 10 among the best public regional institutions in the South and No. 8 for veterans.

The University of Georgia ranked No. 16 among the nation’s public universities. The Terry College of Business ranked among the nation’s top 25 undergraduate business programs, and its insurance/risk management program once again secured the top spot in the country. UGA is also ranked as one of the top 25 best colleges for veterans.

Valdosta State University ranked No. 113 in social mobility, No. 221 in undergraduate nursing programs and No. 363 in undergraduate business programs. VSU is listed in the categories of Best National Universities, Top Public Schools and Undergraduate Computer Science.