Why Businesses are Choosing Greater Phoenix

When Deloitte announced recently that it would invest $34 million to develop a 100,000-sq.-ft. technology solutions complex employing 1,500 phase-1 jobs in Gilbert, the news served as the latest propellent for a Greater Phoenix economy that is firing on all cylinders.

With an annual GDP of more than $240 billion, ranking 16th in the country, the 4.7-million-resident Greater Phoenix Metropolitan Statistical Area (MSA) has become one of the most attractive business destinations in the country, according to experts who study business migration patterns for a living.

"Phoenix ranks number 17 in the nation in tech talent growth and number 16 best for young professionals," says Jim Rounds, president of Rounds Consulting Group in Tempe. "Arizona became a top 5 state for population growth, job growth and income growth, and Greater Phoenix is the main reason why. Greater Phoenix is three-fourths of the state's economy."

Because of this growth, and the underlying factors fueling it, Rounds says he is "much more bullish on the region than [he] was last year or five years ago." What changed? "The economic numbers look better," he says, "and the U.S. economy is stronger now."

"Not just one thing, but dozens of things drive our economy," says Rounds. "We have changed our policy to encourage economic growth. You have to do this repeatedly before you get the benefits, and Phoenix is reaping the rewards of these pro-growth policy changes."

Elliott Pollack, CEO of consulting firm Elliott D. Pollack & Company in Scottsdale, agrees. "The Greater Phoenix economy is doing extremely well. This is the strongest it's been in over 12 years," he says. "Our jobless rate of 3.4 percent is the lowest we've had since 2007, and our 3 percent GDP growth rate is the largest we've experienced since 2006, making Phoenix the seventh-fastest-growing market in the U.S."

More than 90 percent of all new jobs in Arizona originate in Greater Phoenix, says Pollack. "Our growth is very balanced," he notes. "Housing permits are up 14 percent and will exceed 20,000 new permits this year. Our median home price is $250,000, up 8.7 percent from a year ago."

With a population that's growing 1.8 percent a year, Greater Phoenix is becoming the destination of choice for employers' most coveted demographic: highly educated, highly skilled millennials.

“Greater Phoenix is one of those places, like Dallas and Denver, that wants to grow. It has a pro-business climate and a reasonable cost of living.”
— Elliott Pollack, CEO, Elliott D. Pollack & Company, Scottsdale

"Maricopa County had the largest numeric increase of any U.S. county last year, as 89,000 people moved here," Pollack says. "That makes us the second-fastest-growing metro in the country. This has been an exceptional year, and I expect 2019 to be a good year too."

Several fundamental factors underpin this growth, he adds. "People vote with their feet, and companies vote by moving their offices to Phoenix," he says. "It's not like other states where companies are treated like pariahs. The Greater Phoenix Economic Council and the Arizona Commerce Authority go to bat for you. The whole environment has become very favorable for businesses and their workers."

He adds that Greater Phoenix "is one of those places, like Dallas and Denver, that wants to grow. It has a pro-business climate and a reasonable cost of living. Housing is very affordable. It is well located. It is easy to get anywhere from here."

The market is also well positioned to grow in the future, he notes. The industries that are growing the fastest — health care services, FinTech, professional and business services, leisure and hospitality — are inherent strengths in Greater Phoenix. "As long as we attract millennials," he says, "we will attract the companies that need them as workers."

Finally, Pollack says, the region's trump card is its unparalleled quality of life. "The overall vibrance of our communities has just exploded," he says. "Places like downtown Tempe, Chandler, Gilbert, Glendale, downtown Scottsdale and downtown Phoenix have become thriving centers of commerce, retail and entertainment. They are destinations of choice."

Not even a trade war will slow down Greater Phoenix, he adds. "Even if there are trade issues with Canada and Mexico, I think they will have only minor effects on Greater Phoenix. It will be a blip and then things will pick back up," he says. "Our economy is based on a lot more than international trade. This is a true success story." 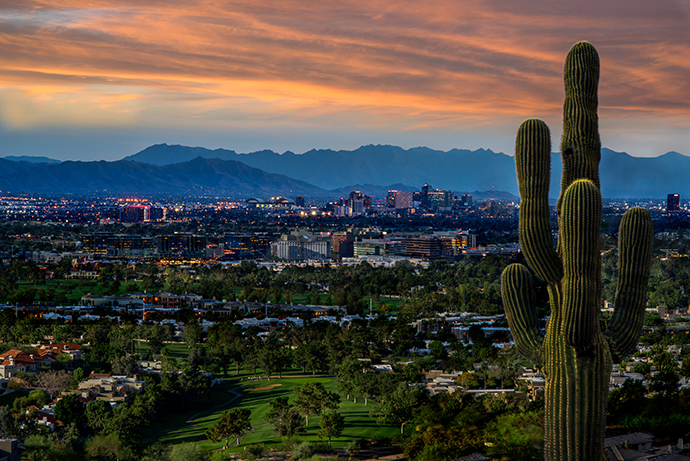