Boarding Pass to a Brighter Future

O'Hare's big project is just one aspect of the state's multifaceted role in international commerce. 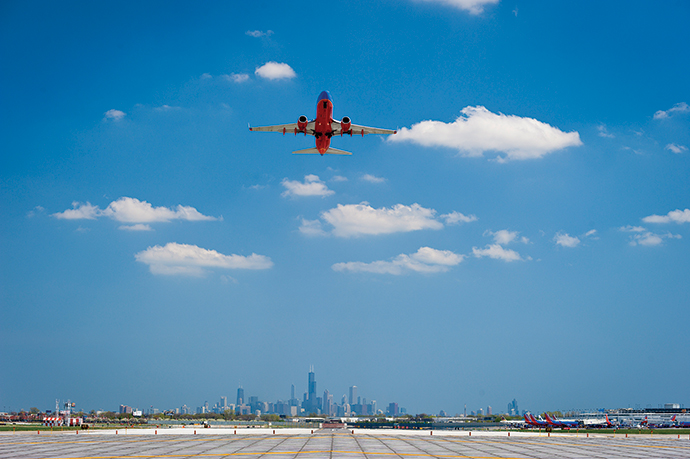 O’Hare’s $8.7-billion Terminal Area Plan (TAP) will provide the first major capital improvements to terminals in 25 years and the largest expansion in the airport’s history. “The O’Hare transformation is a boarding pass to a brighter future for Chicago,” said Mayor Rahm Emanuel.
Photo courtesy of City of Chica
by ADAM BRUNS

A new international terminal is part of an $8.5-billion modernization at O'Hare International Airport in Chicago. There are more than 80 consulates and consuls general based in that city, with more honorary consuls scattered throughout the state from Swansea to Moline. The state's roster of foreign investors is as strong and diverse as its population.

In other words, it's safe to say Illinois is among the most globally connected states in the nation.

That assertion received further confirmation in July 2018, when the IBM Global Location Trends report identified Chicago — for the sixth year in a row — as the No. 1 North American city for foreign direct investment (FDI), and among the top five cities globally. The metro area is home to more than 1,800 foreign-based companies, accounting for more than $100 billion in FDI.

Just before the news broke, Chicago Mayor Rahm Emanuel and Andrea Zopp, President and CEO of World Business Chicago, led an economic mission to China and Japan, partly to protect Chicago jobs threatened by a trade war. CRRC Sifang is building a $100-million facility on the Southeast Side of Chicago that will assemble the Chicago Transit Authority's newest rail cars and create more than 350 factory and construction jobs. Emanuel met with Chinese Vice President Wang Qishan and CRRC Sifang executives, and announced afterward that the project will move forward, with Chicago employees soon traveling to China for training.

While in China, the mayor and World Business Chicago also continued implementation of the Gateway Cities Agreement. In Japan, Emanuel signed the first economic partnership between the Japanese government and a city anywhere in the world.

"By creating economic partnerships around the world and growing our international network," Zopp said in a release celebrating the IBM report's findings, "we ensure that Chicago leads on the global stage."

The region's world-scale transport network helps ensure that status too. O'Hare is among only a few airports worldwide that rank in the top 20 for both passenger volume and cargo tonnage. Total air cargo tonnage handled at O'Hare was approximately 1.9 million tons in 2017, a nearly 12-percent increase over the previous record for the airport set in 2016. In 2017, O'Hare and Midway airports handled more than 100 million passengers, also surpassing the previous record set in 2016.

From your recent economic mission to Asia, describe how business leaders perceived the city and the state of Illinois in terms of global connectivity, diverse talent base and multinational corporate presence.

Grant Klinzman: Business leaders were impressed with Chicago's talent base (high percentage of college graduates and diverse base), and the fact that Chicago will shortly be one of only five cities in the world to have nonstop access to all major world continental groupings, as well as Chicago's location at the center of North America's air, transport and rail networks. Chicago is known as a corporate center, but not everyone knows that the Chicago area, with 35 Fortune 500 headquarters, is second only to greater New York in the U.S. and ahead of other coastal metros; Chicago's top position in Site Selection's metro rankings and FDI projects was also news. Nor does everyone know that Chicago now has the most diverse large-city economy in the U.S., with no more than 14 percent of the economy concentrated in one sector.

How does the O'Hare modernization project reflect the city's global economic development vision?

Klinzman: O'Hare 21 is Mayor Rahm Emanuel's vision for modernizing O'Hare International Airport (ORD) by building more efficient, higher capacity facilities to support a world-class airport and to fuel Chicago's leading international connectivity. Approved in March 2018 by the city and its airline partners, the centerpiece of this program is an $8.7-billion capital program to deliver a 3-million-square-foot terminal expansion complete with a new global terminal and three new concourses; a 25 percent expansion of gates; and a wide range of other improvements to enhance Chicago's gateway to the world as well as our local economy.

The O'Hare 21 terminal expansion will also maximize Chicago's leading international connectivity. In 2018 alone, ORD has added 17 new international routes. By the end of 2018, Chicago will be one of only five cities globally to have nonstop passenger air service to all six major inhabited regions of the world (Africa, Asia, Europe, North America, Oceania, and South America).

In addition to the benefits to be seen by tens of millions of passengers around the world, the benefits of our plans for O'Hare are far-reaching for the city and the region. This program creates more than 60,000 construction jobs through 2026, with tens of thousands of permanent jobs, and ensures one of the city's economic engines is positioned to drive significant growth for the region in the years and decades to come.

Chicago's plans for O'Hare are conducive to the fast-growing aviation industry, and rapid expansion of corporate relocations under the current administration. In the next few years, O'Hare is expected to serve nearly 100 million passengers, up from nearly 80 million served today. The economic impact of this program (past 2026) on the region will be greater, with O'Hare 21 expected to provide at least $65 billion in economic contribution to the region, and to enable more than 600,000 jobs on an annual basis in the next eight years.

Andrea Zopp has described how Chicago is making strides in transit-oriented mixed-use development too, with socio-economic inclusion as a priority. Describe how this type of connectivity contributes to the region's economic development vision.

Klinzman: Transit access is extremely important in order for all groups and locations to fully participate in economic growth. Encouraging and incentivizing transit-intensive development helps increase access to economic opportunity while at the same time reducing traffic congestion and carbon emissions. The City of Chicago is examining expanding transit-oriented development to include high-ridership, high-frequency bus lines as well, which would make Chicago the first city to pursue a citywide transit-oriented development policy around buses.

How often do company leaders tell you the area's transportation was a top factor in their investment decision?

Klinzman: Transportation infrastructure does come into play often, as nonstop access to Chicago from major global economic centers means foreign firms can easily access their headquarters and other global operations from Chicago, as well as having superb access to North American markets — over 200 nonstop destinations. The importance of O'Hare (and Midway, a large air hub in its own right) cannot be overstated. Not only is access to markets and customers important, but rail, ground, and air shipping is key for many firms. Combined with a unique central location, the logistics infrastructure of the region — both physical systems and know-how from a myriad of logistics providers, freight forwarders and the like — cannot easily be replicated elsewhere.