A Global Leader In Key Sectors

From food to pharmaceuticals, Illinois is home to a broad array of industries. 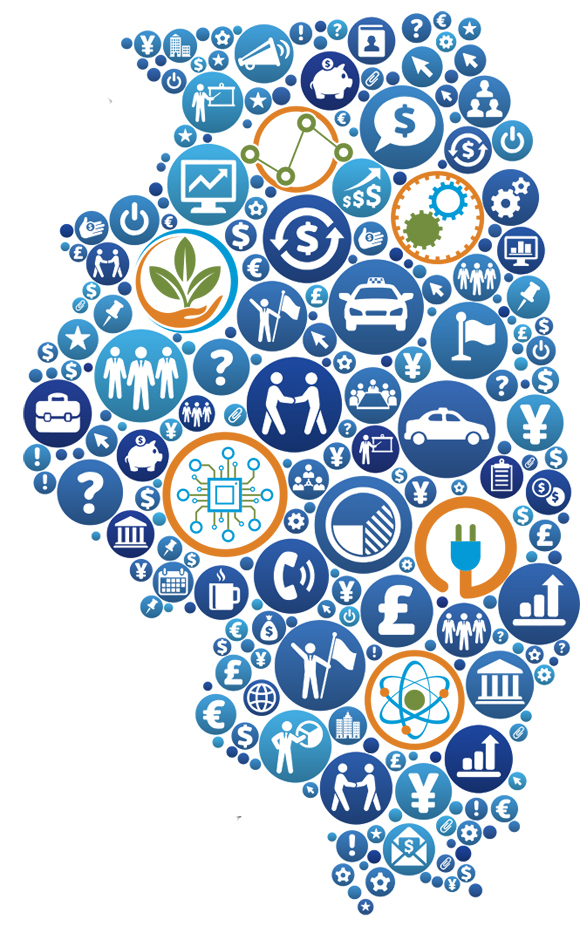 The business attraction assets of Illinois are many, but perhaps the greatest of them is the wide diversity of industries that are both present and growing in the state.

The six target industry clusters in the state are agribusiness, energy, life sciences, manufacturing, technology, and transportation and logistics. Here is a snapshot of each:

Illinois is home to 72,000 farms that stretch across 75% of the state’s total land area. Illinois farmers are the top producers of corn, soybeans, and livestock in the country. In addition, Illinois offers elite expertise in food processing, ranking No. 2 in America and contributing $11.8 billion to Illinois’ economy annually. The state also produces the 2nd most food-related patents in the nation and 4th most in the world.

Archer-Daniels Midland, Tyson Foods and ConAgra are just a few of the food industry titans that call Illinois home.

Illinois is the No. 1 state in the nation for sustainable development, according to Site Selection magazine.

The Illinois Renewable Portfolio Standard target states that energy providers’ portfolio mix should include 25% renewable energy-sources by 2025. Illinois currently ranks first in generation of electricity from nuclear power in the country and second in the Midwest in solar energy.

Illinois is home to research giants Argonne National Laboratory and FermiLab and is a world leader in pharmaceuticals, medical equipment, chemicals and biotechnology. Among the state’s resources to fuel research and collaboration are the Illinois Science + Technology Park, a 24-acre campus with an incubator for lab-based startups, and Illinois Medical District, one of the largest urban medical districts in the country.

Among the many life-science heavyweights based in Illinois are Abbot, Abbvie, Baxter
and Horizon.

Illinois ranks fourth for manufacturing output in the nation, with over 560,000 workers employed in production jobs in the state. Illinois boasts a history of industrial leadership that has evolved into an advanced, technology-driven sector. Illinois manufacturing companies benefit from low energy rates and deregulation as well as a low-cost, high-quality water supply. There’s also the state’s central North American location and world-class air, passenger and freight transportation network.

Illinois is ranked second in the nation for the number of commercial banks. Many of the world’s top financial institutions are headquartered in Chicago, where they are joined by fast-growing startups and some of the world’s largest financial exchanges, the CME Group and Chicago Board Options Exchange.

Chicago ranks as the second largest transportation & logistics market in the U.S.

“While the industrial vacancy rate increased during the final three quarters of the year due to new vacancies being introduced in both second-generation buildings and new speculative developments, it ended the year at 6.73%, only 48 basis points above the 6.25% rate recorded at the end of 2019, and well below the 12.31% peak recorded in 2010 following the previous recession,” the report stated.

With 5 international airports and 1,600 daily departures, Illinois also ranks as one of the top air travel hubs in the world, led by the incomparable Chicago O’Hare International Airport.